We first got a glimpse of Blue Ivy Carter‘s pretty face during her Momma’s HBO documentary, “Life Is But A Dream”. And every since, we’ve been ready for more! Welp, Baby Blue was spotted in these streets fully uncovered yesterday, as she stomped through Brooklyn to have brunch with her Mama, clad in timbs and a camo jacket. 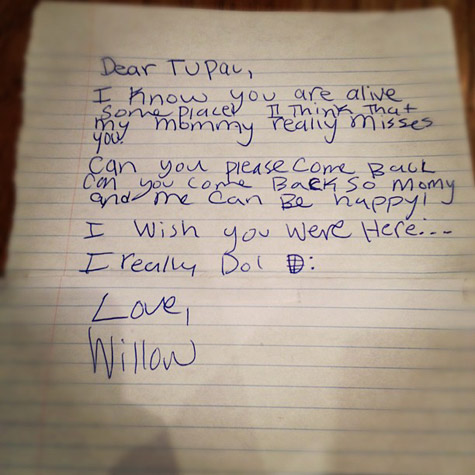 The 11-year-old singer known as Willow Smith has recently shared a letter that she wrote to Tupac Shakur years ago. In the handwritten note, she asks the late rapper to come back because her mother Jada Pinkett-Smith misses him. Some of you may know that Jada and Pac had a pretty close relationship, way back when.

“Can you come back so mommy and me can be happy?”

My confusion comes in two parts, one, why are they releasing this? And two, how unhappy was Jada at the time that Willow would be so affected?

“I was surprised nobody else ain’t helping with it,” said the rapper, who is also trying to help him raise the remaining portion. “That’s what we do at Dreamchasers. When we see somebody working or whatever they trying to do, we help them out.”

And looks as if Fly Girl, Kelly Rowland has been solicited to star in a pilot for BET. According to reports, Kells will play Dylan, a struggling L.A.-based relationship blogger …

… Who lives with her best friend Cherise (Gabrielle Dennis) and roommate Brooke (Melanie Liburd), in the tentatively-titled series “What Would Dylan Do.”

In other Kelly news, the brown beauty is recording her fourth solo album, due by the end of the year. Although, In my opinion, there was not enough promotion for the last one …  but ehhhhh. The first single, “Ice” featuring Lil Wayne, was released last month.