Straight Outta Compton raised the bar when it came to the hip-hop biopic, All Eyez On Me looks to keep the streak going and based off the trailer and clips it’s looking really good. In a new clip from the upcoming film titled “Without You”, we get a glimpse of Tupac’s (Demetrius Shipp Jr), close relationship with his mother Afeni Shakur (Danai Gurira).

What’s even more chilling/impressive is how both Shipp and Gurira look exactly like Tupac and Afeni in the scene. The clip hits home with Mother’s Day right around the corner plus combined with Tupac’s powerful lyrics in his ode to Mama’s everywhere “Dear Mama”.  Also in conjuction with the film, there is a meme generator that will alllow you to partake in the #DearMama hashtag where you can honor the special women in your lives. 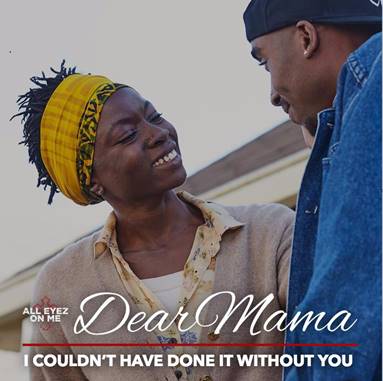 ALL EYEZ ON ME tells the true and untold story of prolific rapper, actor, poet and activist Tupac Shakur. The film follows Shakur from his early days in New York City to his evolution into being one of the world’s most recognized and influential voices before his untimely death at the age of 25. Against all odds, Shakur’s raw talent, powerful lyrics and revolutionary mind-set propelled him into becoming a cultural icon whose legacy continues to grow long after his passing.

The film is directed by Benny Boom and produced by LT Hutton, David Robinson and James G. Robinson. 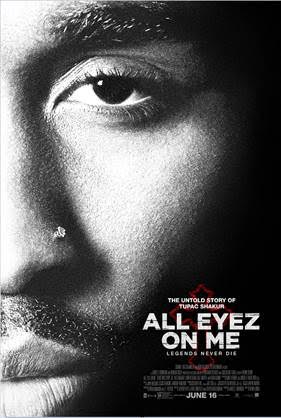 ALL EYEZ ON ME Official Channels

Your Popcorn: 13 Films That Should Be On Your Radar This Summer!

Watch: The New Official Trailer For The Tupac Biopic ‘ALL EYEZ ON ME’

Today, the official trailer for the Tupac Biopic ALL EYEZ ON ME has been released and you can view it right here at SFPL! The film is set to hit theaters on June 16, 2017. The biopic will also be closing out this year’s American Black Film Festival (ABFF) on June 17.

‘ALL EYEZ ON ME’ tells the true and untold story o a prolific rapper, actor, poet and activist Tupac Shakur. The film follows Shakur from his early days in New York City to his evolution into being one of the world’s most recognized and influential voices before his untimely death at the age of 25. Against all odds, Shakur’s raw talent, powerful lyrics, and revolutionary mind-set propelled him into becoming a cultural icon whose legacy continues to grow long after his passing.

Haddy Racks is back with the second installment of his visual mixtape series, #Mixtagram v.2 No Cuffin Season. Comprised of seven one-minute visuals of Racks’ freestyles over classics from the likes of 50 Cent, Nas, Jadakiss, Tupac and Cam’ron, the project debuted on the Bronx songwriter’s IG account, and we now have the clips for you on YouTube as well.

Check them out below:

Bronx songwriter Haddy Racks put a fresh spin on viral music recently with his #Mixtagram Volume 1 visual mixtape, which dropped on his IG at instagram.com/HaddyRacks.
The original seven-video series follows Haddy Racks around NYC as he freestyles to beats from Nas, Tupac, Mary J Blige, Amerie and Cam’ron, as well as his applauded entry into Monica‘s “So Gone Challenge.”
Check out the IG videos and get the audio version below.
Mixtagram Vol. 1 tracklist:
01:1 Dear Momma
01:2 It’s Real
01:3 State of Mind
01:4 Slick Talk
01:5 Can You Be
01:6 Get Money
01:7 I’m Gone

If you had the opportunity to speak to a celebrity beyond the skies who would it be?  We can already guess the answers will range from B.I.G, Aaliyah,  Left Eye,  Michael Jackson, Heavy D, Big Pun, back to Eazy E. There are a number of talents that blessed our time while passing through but we’re most certain that chances are, Tupac has a firm spot in that mix as well.

The idea of accomplishing a goal as such has been a thought, too far fetch to develop into reality, that is until now. Check out more after the jump. 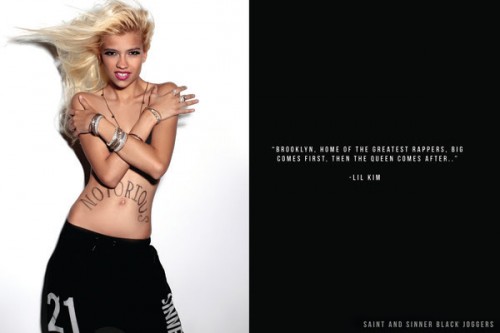 You gotta love ENTREE LS! In reference to the MISUNDERSTOOD concept that drives their brand, this Lookbook is paying homage to the most popular, yet misread artists of our time (Biggie, Lil Kim, Tupac, Jay Z, Chris Brown, Eminem, Miley Cyrus, Rihanna, Kanye West, Michael Jackson, Lil Wayne and Ol’ Dirty Bastard) with a mirrored version of some of their greatest memorable photos. Check out the exclusive pics below…

END_OF_DOCUMENT_TOKEN_TO_BE_REPLACED

The Snowman himself, Jeezy lands The 2014 Power 30/SOURCE360 Issue! The Avion Tequila ambassador, and talented rapper speaks on; auditioning to be Tupac on broadway, ‘Ferguson’ and much more. Also, below you will find Jeezy’s ‘The Roundtable’ part 1 of 3 featuring Jeezy, Angela Yee, Combat Jack, Kyambo “Hip Hop” Joshua, Shaheem Reid, & Chuck Creekmur. Check it out below…

END_OF_DOCUMENT_TOKEN_TO_BE_REPLACED 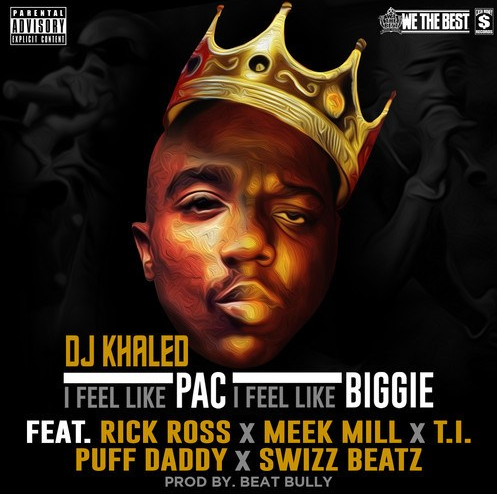 DJ Khaled isn’t one to shy away from controversy and he’s ready for everyone’s commentary on his newly released street single, “Feel Like Pac, Feel Like Biggie.” He spoke with Boss Lady and DJ Steel of Hip Hop Nation exclusively about the track’s title and more. Peep the interview below…

Upon the very first look, you want to know what she does. She looks soft enough to be a singer, but she definitely has enough edge to be a rapper, but WAIT…she’s BOTH! Step into new music sensation Paloma Ford! Team SFPL, recently caught up with the new artist to see what all the buzz was about and we think you may like what you read…

END_OF_DOCUMENT_TOKEN_TO_BE_REPLACED

In the concept of the classic Janet Jackson x Tupac movie ‘Poetic Justice’, Kendrick Lamar brings us a new visual displaying his love and affection towards a neighborhood sweetheart, which features rapper Drake. The new joint is from his ‘Good Kid, m.A.A.d. City’ album via TDE/Interscope. Peep the video below…