he Secret Life of Pets will be scampering onto the big screen tomorrow, if you need to know if it’s worthy of your coins we already got you covered with our FLY Review. Team SFPL got the chance to attend the press junket for upcoming Illumination Entertainment animated adventure. NYC members of the press were taken to Liberty State Park in Jersey City, New Jersey to meet with the cast and crew of film and talk about film. The press conference featured Lake Bell (Chloe), Bobby Moyniham (Mel), Chris Renaud (Director/Norman), writers Cinco Paul, Ken Daurio and Brian Lynch, Eric Stonestreet (Duke) and Kevin Hart (Snowball) and Louis C.K. (Max). The conferences were broken up into five separate segments.

Each actor and actress touched on the difficult but fun process of bringing the lovable characters to life.Other items touched on  of course were merchandise, pets, being a part of such a fun project and favorite characters in the film. We also got a chance to talk to the director of the film Chris Renaud who spoke on his inspiration for the film and the inspiration behind each character. We also got a chance to chop it up with writers of the film Cinco Paul, Ken Daurio and Brian Lynch. The trio clearly enjoyed writing the project and piecing the exciting story together.

Last but certainly not least were the stars of the film Louis C.K. who plays Max and Kevin Hart who voices the cute but maniacal bunny rabbit Snowball. The two spoke on of course their characters in the film, being fathers in the entertainment industry, working on animated features.

Of course Kevin brought his brand of humor when it came to answering questions so it was hard not to laugh during the press conference.

I was excited,this is my first animation film. Nothing gets you more excited than seeing your character, see that your character has two sides. They showed me a pictured of the bunny when he was very nice and adorable, then he flipped the page and he was grabbing his ears and his eyes and stuff were angry. They said Kevin we want you basically bring your personality to this bunny. You know give us the cute cuddly side and at the same time make it believable that this guy can start a revolution and have people follow him so I jumped at the opportunity.

Things also got serious when the issue of race was brought up.  SFPL’s own Bernard Smalls asked Kevin about an article featured in Vulture that brought up the “issue” of Hollywood hiding black actors behind make-up, prosthetics and animation on the big screen.

Kevin on the issue:

I think people will look for any excuse to play the race card in Hollywood. This day and age look, it is what it is you know, you want it be more diversified you want to see more diversity. But a lot of people draw attention to it by talking about it.Where as if you just work and progress you eventually put yourself in position to where you can help the problem buy bringing more people into the business. Where you draw negative attention you’re only going to get a negative response, I don’t believe into adding to it. I bust my ass and do what i’m supposed to and I’ve been promoting movies internationally now for the last four years. They said movies don’t transfer with black actors internationally, I don’t feed into that, I do what I do. If other people did the same you would look up you would see more multicultural films being received by so many more people. I would just say instead of looking for a reason to say LOOK AT THAT, look at the people who are in those positions and working and applaud them. Applaud those actors that are in those animated movies regardless of color of skin, they’re working and creating opportunities for others.

The Secret Life of Pets is in theaters Friday, July 8th!

The Secret Life of Pets Launches New #PetMoji App For Animal Lovers All Over!

‘Secret Life of Pets’: Celebrities and Their Furry Friends.

ou ever wonder what shenanigans your pets get into when you set off for work? Illumination Entertainment (Despicable Me, Minions) tackle that idea with their new animation film The Secret Life of Pets.

Co-directors Chris Renaud and Yarrow Cheney look to stir the imagination of children with their latest animated adventure. Next to toys the second best thing in the world to a young child is a pet. Pixar already handled that element and now Illumination successfully tackles the world of pets.

The Secret Life of Pets  focuses around Max (Louis C.K.), a terrier who was taken in by his owner Katie (Ellen Kemper) when he was a puppy. Over the course of several years they form an unbreakable bond which becomes tested when Katie brings home Duke (Eric Stonestreet).

Of course being the territorial creature that he is, Max is not to fond of his new housemate, and they are immediately thrust into a rivalry. The canine beef eventually leads into acts of vandalism and even framing that somehow leads the two domesticated animals outside of their safe apartment. Now lost in the beautifully drawn city of New York, Max and Duke meet Snowball (Kevin Hart), a cute and maniacal bunny who leads a pack of sewer dwelling animals called “The Flushed Pets”. Clearly hurt over being abandoned,Snowball is hell-bent on ridding the world of humans and liberating domesticated pets. Hart’s very random gang of “liberators” includes Tattoo (Micael Beattie) a tattooed pig that was used for practice at a tattoo parlor,Ripper a muzzled bull-dog, Dragon (Brian T.Delaney) a lizard and a crocodile.

On their adventure to find Max, they take a detour to Brooklyn which brings them to Pops (Dana Carvey) a very old basset hound who knows his way around the city. With his help they navigate the the busy streets of New York in search of their friend Max and look to foil Snowball’s plans.

The Secret Life of Pets isn’t anything groundbreaking as far as the story is concerned, but it definitely has the legs to become as popular as Pixar’s Toy Story franchise. All of the voice acting is done wonderfully, I was most impressed with Louis C.K.’s portrayal of Max, Lake Bell as Chloe and Kevin Hart as Snowball who was easily my favorite character.

The Secret Life of Pets will definitely have you wondering what exactly goes in your pets life when you’re not around and believing that crazy situations the talking pets get themselves into are possible. Most importantly though the kids will love it as it will more than likely have them looking at their beloved pets in a whole new light after checking out the film. In a summer movie blockbuster season seemingly dominated by caped crusaders and super villains, The Secret Life of Pets is a perfect alternative for the kids and introduce them to characters that will be loved for years to come.

The Secret Life of Pets is in theaters July 8th!

The Secret Life of Pets Launches New #PetMoji App For Animal Lovers All Over!

‘Secret Life of Pets’: Celebrities and Their Furry Friends.

he Secret Life of Pets doesn’t hit theaters till July 8th, until then here’s a treat for animal lovers all over. To build up excitement for upcoming animated adventure, the PetMOJI app has officially gone live.

The app allows users to turn their favorite pet into a lovable emoji than you can share on all of social media accounts. The app is now available on iOS and features sticker packs and a custom keyboard. You can also visit MYPetEmoji.com to turn your animal best friend into a one of a kind emoji from your computer and make all your friends jealous.

The Secret Life of Pets is in theaters July, 8th!

END_OF_DOCUMENT_TOKEN_TO_BE_REPLACED

The big screens have exposed us to some pretty bizarre and outlandish adventures that animals tend to embark on in our absence, but there’s nothing quite like the mischief, mishap and wild adventures the pets take on in Universal Studios’ upcoming film, THE SECRET LIFE OF PETS. And to gear us up for all this wild animality, it’s National Pet Day… which means you can post as many pictures of your pets as you’d like, that nobody really cares about as much as you do, without coming off as super annoying.

Check out these celebs who just can’t get enough of their pawfect poochies, and don’t forget, ‘SECRET LIFE OF PETS’ is in theaters nationwide July 8th!

Fashionista Angela Simmons makes sure her pup is also on point, as she poses for a quick pic outside of her hotel in the big apple.

And one of the dopest stars who started from Disney, Zendaya, gets cozier with her schnauzer, Noon in the late afternoon… who apparently peed on her bed 3 times, but with all that love, she could care less. 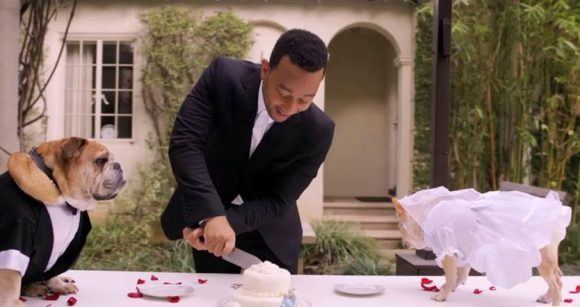 And as if the lovin’ couldn’t get any more real, one of our fave celebrity couples, John Legend and Chrissy Teigen, organized a wedding for their pups Pippa and Putty.

But leave it up to Kevin Hart to show the world just how much quality time him and his kids spend with their puppy loves… and we mean all the quality time they can get, no matter what they’re doing. You gotta love it!

SYNOPSIS: Taking place in a Manhattan apartment building, Max’s life as a favorite pet is turned upside down, when his owner brings home a sloppy mongrel named Duke. They have to put their quarrels behind when they find out that an adorable white bunny named Snowball is building an army of abandoned pets determined to take revenge on all happy-owned pets and their owners.