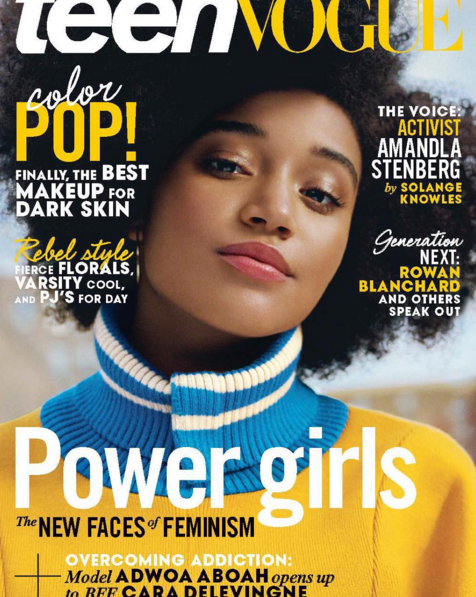 Admitting that she wasn’t quite prepared for the interview at the hand, Solange Knowles realized that she had a special connection with Amandla Stenberg, although never meeting her at all but realized that preparation wasn’t needed, as she recognized her so deeply.

There’s a secret language shared among black girls who are destined to climb mountains and cross rivers in a world that tells us to belong to the valleys that surround us. You learn it very young, and although it has no words, you hear it clearly. You sense it when you walk into rooms with your hair in full bloom, each coil glorious, your sway swift and your stance proud. You feel it like a rhythm you can’t shake if you even dared to quiet the sounds around you.

Covering Teen Vogue‘s February issue entitled Power Girls: The New Faces of Feminism, Amandla stands firm as she’s learned to love her blackness. What better way to seal the deal of this self-empowerment issue and marking Black History Month, then to have our favorite fashionista of them all and someone who stands in what she believes, Solange.

Solo sits with Amandla during their bonding moment, discussing being different from other black girls, hair textures, skin tones, having a voice, empowerment, going viral after her YouTube video titled Don’t Cash Crop On My Conrows and so much more.

So here we are, connecting as two nonconforming black girls. Connecting as two trailblazers who recognize the borders that have been built around us as we steadily tear them down, dancing through life while coloring outside every line. Connecting as two lovers of music, art, and the color orange. Connecting as two chicks who are over talking about our hair — although we know it’s badass! Connecting as two descendants of powerful queens who made the journey before us and whom we hold in the highest regard. I may not have prepared, but I sure as hell felt inspired by our honesty with each other and ready to take on the world — sprinkling black girl magic in every crevice of the universe. Listen in…—SOLANGE KNOWLES

SOLANGE: I feel like my introduction to you was probably like that of a lot of people — or at least people who might not have seen The Hunger Games — via your video on cultural appropriation, “Don’t Cash Crop My Cornrows,” which was so brilliant! I know that you made it for a class assignment, but in terms of sharing it with the world was there ever a moment of fear before hitting the “publish” button?

AMANDLA: I really didn’t think it was going to be so controversial. And then to have the label of “revolutionary” pinned on you afterward felt really daunting. I kind of had a moment with myself, like, “OK. Is this what you want to do? Do you actually want to talk about issues? Is it worth it?” There are still moments now where I’m like, “Whoa, this is a lot of pressure.” But it’s worth it because when people come to me and say, “I’m more comfortable in my identity because of you,” or “I feel like you’ve given me a voice,” that’s the most powerful thing ever.

SOLANGE: Does it feel like sometimes you’re just exhausted talking about it?

AMANDLA: Yo — yes! It’s so funny. I have many white friends who come up to me and they’re like, “Amandla, so this weekend I’m going to go out, and I was wondering if it’s OK if I could wear cornrows just on Saturday?” [Laughs] I’m tired of talking about who can have whichever style. Because I’ve said my thing.

SOLANGE: Yeah,you made it clear in your video. It was so articulate and perfectly put!

SOLANGE: What things do you do to just shut off your brain and let go of all of the intellect and spirituality and yada, yada, yada? For me, I am on Shopbop or watching The Real Housewives of Atlanta or trolling Snapchat videos of me dancing around, which all my friends are so annoyed by…. [Laughs]

AMANDLA: Oh, my God. I take a lot of really dumb Snapchat videos, too! Really bad, like double-chin selfies. Or I am in my bed watching Leonardo DiCaprio in ’90s movies, because I have an obsession with him right now. I also love going to really crappy diners with my friends just to get pancakes and drink sh*tty coffee at, like, midnight. We do that all the time.

AMANDLA:Oh, man. Well, Kiernan has been by my side since the beginning. Willow is amazing. I feel like we were just meant to be friends. We were kind of vibing off each other from afar, and then she hit me up and was like, “Let’s hang out!” She has the most magnetic, radiant energy ever. Whenever we hang out we just laugh and we sing and we dance and we go hiking. And then Tavi—I was the biggest Rookie fan since forever. I checked it daily, hourly. Then Rookie asked me to do an interview, and now Tavi is one of my closest friends. We talk about everything and bounce ideas off each other; I send her some of my scripts, and she sends them back. I have a friend who has this thing called “shine theory,” which basically says that when you become friends with other􏰀powerful,like-minded people, you all just shine brighter.

Congrats to Amandla and Solange!

Read more over at Teen Vogue.

Kendall Jenner has been on fire lately! From ripping the fashion runways, covering iconic magazines; which now the young fashion maven covers the new September issue (Aug. 19th): as fashion new IT GIRL of Teen Vogue. In the issue, Kendall speaks on; people didn’t want to take a chance oh her, growing up in the reality spotlight – but wanting to remain a kid, and taking modeling seriously. Check it out below…

END_OF_DOCUMENT_TOKEN_TO_BE_REPLACED

Actress Raven-Symone attended the 8th Annual Teen Vogue Young Hollywood Party at Paramount Studios. I love Raven and her recent weight-loss looks amazing on her. But you have to still be careful of the clothing choices. The dress was a pretty good choice but would have been better if there was more length in the front.

More pics after the jump…