Singer/Songwriter/Musician Rudy Currence drops his latest visual for the hit song “Testimony.” Get into the inspirational vibes that Rudy delivers with his dynamic vocals and catchy tune. Just to add, Chance The Rapper would be a great addition to this track for a remix.

We all know the trending term; “Bye Felicia!” Well, to keep the emphasis going, singer-songwriter-musician Rudy Currence flips the populated saying and makes a song out it, touching on the fact that everyone has a “Bye Felicia” somewhere around.

Whether it’s a friend, family member, or girlfriend, Felicia is alive and in-color.

Man, I was just being creative. That track has always been my favorite record from Bilal. So, when I started writing to it, that’s what I came up with. Then I flipped the end so that its live too.

Very fitting to drop the refix cover, as Bilal will be dropping his official album ‘In Another Life’ on June 29th!

Rudy killed this track — check it above!

Fly Stream: Listen To Bilal’s New Album ‘In Another Life’ 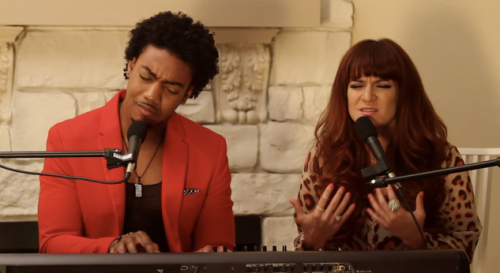 The Currence Chronicles is back for it’s 5th episode! If your not familiar with it, then now is your chance to get acquainted.

For his fans, Rudy Currence‘s viral video series is both long awaited and highly anticipated. Two years after the release of its predecessor, The Kawai Kronicles, TCC demonstrates why Rudy has appropriately been adorned with the title, The Rudy Currence Experience. Already possessing thousands of subscribers and millions of youtube views to date, this new season of “The Chronicles” is rumored to be the best one yet!

In the episode, Rudy premieres his first feature of the season with the beautiful songbird herself, Shoshana Bean whose not only a vocal powerhouse, but she’s also starred on Broadway in several musicals including Wicked.

Rudy arranged a cover of Beyonce‘s “Mine” featuring Drake just to showcase her voice and together the two of them sound completely amazing! Their chemistry is undeniable as they transition seamlessly through several musical transitions and time signatures. You’ll have to see for yourself but we think Drake and Ms. Carter would be quite satisfied and proud of what this duo came up with melodically.

This was definitely one of the most EPIC moments here in NYC! Love Jones NYC held an ‘Side Effects of You’ official Album Release, Album Listening and Allstar Tribute for the incomparable Fantasia.

END_OF_DOCUMENT_TOKEN_TO_BE_REPLACED

Singer Rudy Currence gives a melodic visual of his current track titled “Cold Hands, Warm Heart”. Vocally, Rudy takes this song to another level of harmonic greatness. Check it out after the jump….

END_OF_DOCUMENT_TOKEN_TO_BE_REPLACED

Rudy Currence (Def Jam) x Olivia took their talents over to the Apple Store in Soho, NY, where they performed their plethora of hits.

END_OF_DOCUMENT_TOKEN_TO_BE_REPLACED

Enjoy the sounds of DTP/Ludacris’ new protege Rudy Currence as he sings his version of “The Christmas Song”!

Enjoy after the jump….

END_OF_DOCUMENT_TOKEN_TO_BE_REPLACED

Chrisette Michele brings her label-mate Rudy Currence (DTP/Island Def Jam) along to take over the MLK Chapel at Morehouse/Spelman Homecoming. He performed for over 3,000 students that never heard him before.

This the our first time getting a glimpse of Rudy and from what we can see the kid is really talented. You will be hearing more from him here on SFPL. Black Keys & Blue Skies coming soon…