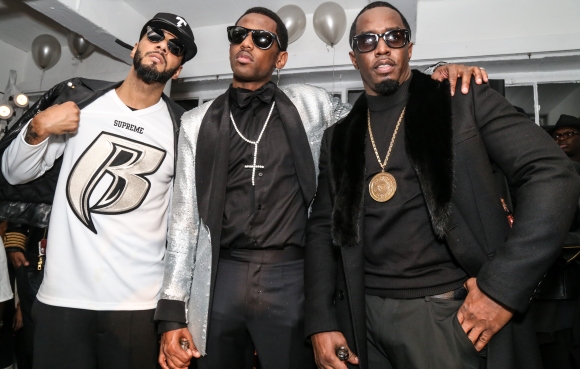 Last Night In NYC…Fabolous celebrated his birthday on this past Tuesday, November 18th in NYC with a star studded 90’s Platinum Party produced by The Vanity Group and sponsored by Royal Elite Vodka, DUSSE & Moet Chandon Nectar Rose.

Peep the FULL gallery below:

Recently, NYC’s Longest-Running R&B/Soul Showcase, SOL Village powered by Gabriel Approves Media Group and You Know I Got Soul hosted by Eric Roberson took place at New York’s prime music venue, SOB’s for its monthly series! This time around, backed by The Collective band were musical acts: Treasure Davis, Samantha Howard, Melat and RL (formerly of NEXT) with special guest Naughty by Nature hit the stage making it one of the most memorable nights ever!

RCA Records/ByStorm Entertainment‘s Treasure Davis gave an amazing performance, giving the on-lookers a glimpse of what next from her upcoming EP Heart Flavored Summer. She also performed her fan-favorite charting hit track “Simple” featuring Kid Ink. With clever riffs and runs, paired with a blend of melodic undertones, old and new, Treasure is the one to watch providing the element of real music, and superb vocality.

The powerful voice, that is, Samantha Howard was in total control as she graced the stage performing her new single “Microscopic” and a few other dope covers. Samantha is known for giving some of the best performances around NYC, and has even hit the stage with rapper Fabolous.

The beautiful singer-songwriter Melat also hit that stage serving up such graceful vocals! She was amazing! The Austin-bred songstress is one of Solange Knowles‘ top music picks as she’s been featured on SaintHeron.com on multiple occasions.

Last but not least, veteran singer/songwriter RL took the stage by storm delivering quite a few classic hits from his days with R&B trio NEXT: “Too Close”, “Wifey”, and “Butta Love”, and a few joints that he penned for Jaheim like;“Anything” and “Just in Case.” Not to mention, the well-known past hit single “We Can’t Be Friends,” a duet performed with Deborah Cox, and the list goes on.

RL also tapped into his new upcoming album 5:15 giving the audience a live snippet of what’s to come from his new project.

To end off his performance, RL brought out surprise special guests Naughty by Nature who performed their biggest hits “O.P.P.” and “Hip Hop Hooray!” It was definitely a family reunion at this point! What an EPIC night!

Singer/Songwriter and R&B veteran RL is back with a brand new single “Me & My Girlfriend.” Produced by SoFoReal and featuring rapper Young Buck.

The new song is sexy groove that is dedicated to the woman who holds him down and rides with him despite what anyone might say.

RL is a classic crooner on this record, using the softer timber of his voice to convey his sincerity and he sings “Nobody else…” and makes you feel it. It’s clear that RL is back and ready to bring real music with him.
Check it out below:
Keep up with RL on IG and Twitter @JustRL

From one amazing voice to the next, singer RL covers a classic that we’ve all grown to love!

END_OF_DOCUMENT_TOKEN_TO_BE_REPLACED

For years, the departure of RL from R&B group N.E.X.T has been somewhat of a mystery. Recently, via a series of interviews, the current members have seen fit to tell “their side” of the story. Up until now, RL had been quiet about the breakup of N.E.X.T, and has never uttered a bad word about the other members of the group. Read more below…

END_OF_DOCUMENT_TOKEN_TO_BE_REPLACED

Notable singer/songwriter, RL, debuts the video to his first single, “Boo’d Up” featuring Big Play Entertainment label mate and fellow Minnesota native, Taylor J, off of his upcoming sophomore album, “5:15”; so named for the actual time of his birth. Check it out below…

END_OF_DOCUMENT_TOKEN_TO_BE_REPLACED

Over the weekend, recording artist and ABC’s “Lincoln Heights” alum Mishon (Clad in an Entree signature crew neck sweater) gave his celebrity friends Jacob Latimore, Dondria, The Yes Ma’ams and R.L. formally of the R&B group ‘Next’ the first listen to his new project entitled “Dorm Room Music” on Tuesday in Atlanta.

According to industry insiders; “The crew of R&B lovers embraced their fellow peer’s music with body rocks of soulful rhythm and head nods of instant approval. The pop hits and sultry ballads blazed throughout the studio as true talent embraced the art of another awesome vocalist.”

“I’m just too blessed right now,” a humbled Mishon expressed to his studio guests. “I’ve been working on this project for a few months now and it’s finally all coming together. My fans are really going to love the new music as it is an example of where I am right now – not last year or a month ago but in this very moment.”

Peep The Video Below…

For more updates, take your talents to Mishon.net and follow @Mishon

Season 2 of the popular ATL LIVE ON THE PARK showcase series, hosted by Kenny Burns and founded by Shanti Das and Marlon Nichols, kicked off last night with R&B veterans Jagged Edge headlining an unforgettable show.