The first eight episodes of the new season will debut on Wednesday, March 15 at 10 p.m. ET/PT.  The remaining eight episodes of the series’ second season will air in summer 2017. “Greenleaf” premiered last June as the #1 series debut in OWN history and was 2016’s #1 new cable series for women, averaging over three million viewers in Live+3 in its first season.
In the series’ second season, the Greenleaf family tree will split at the root as Jacob (Lamman Rucker, “Why Did I Get Married?”) ventures off to begin his new career with long-time rival church Triumph Ministries, breaking faith with his father, Bishop James Greenleaf (Emmy-winner Keith David, “Community”) while his mother, Lady Mae Greenleaf (Golden Globe-nominee and Emmy-winner Lynn Whitfield, “The Josephine Baker Story”), struggles with Jacob’s decision to abandon the family. Meanwhile, after exposing her Uncle Mac’s (GregAlan Williams, “The Accountant”) crimes, but failing to bring him to justice, Grace “Gigi” Greenleaf (Merle Dandridge, “The Night Shift”) finds herself intrigued with someone new, Darius Nash (guest star Rick Fox, “Dope”), a local journalist who’s been closely following the ongoing threats plaguing the Greenleaf empire. Oprah Winfrey (“Selma”) also returns in her guest starring role as Mavis McCready, the sister of Lady Mae Greenleaf and a close confidante to Grace Greenleaf.

In this special clip, Tim Norman and Miss Robbie visits the actual site of where their family member Andre was shot and killed, Tim speaks on a panel to kids about Gun Violence, and Tim’s cousin Monique and TJ’s Mom Jenae both discuss losing close ones due to guns. Later, Tim and Miss Robbie get into a heated discussion about protesting as Tim claims that she doesn’t understand that he won’t get killed due to protesting.

T.D. Jakes is hosting his second town hall style election-themed episode discussing the aftermath of the Presidential election and our divided nation. Realizing the importance of continuing his conversations with all Americans to hear ALL of their voices, Jakes invites guests from all backgrounds to this groundbreaking episode. Wisdom and hope is what the country needs right now – and T.D. Jakes is the preeminent voice.

In this episode, Jakes looks deeper into what is troubling this country and why we need to move forward – including emotional discussions about 9/11 and his own family. It’s a time to come together – but how do we get there?

“Great leaders don’t pick sides! They unite and build bridges and connect us. And they focus on what we have in common rather than what we have to divide us. At the end of the day what we want…is for someone to unite us.”

Jakes leaves us with this powerful message:

“I have to believe that there is a way forward. For this is my home, is it yours?”

Hear all of this and more – please tune in Today, November 15th to catch yet another profound conversation with T.D. JAKES. Please check your local listings (http://www.tdjakes.com/show/be-on-the-show) or watch on OWN at 6:00pm EST / PST.

Kevin McCall has been last known for his recent social media feuds with his ex-music collaborator Chris Brown, not to mention some coparenting issues with ex Eva Marcille.

Now, the talented singer-lyricist-songwriter-producer heads over to Iyanla Vanzant‘s ‘Iyanla: Fix My Life‘ to dig deeper into more personal issues dealing with his father and more.

McCall has long struggled to express his anger constructively, having always been encouraged by his father to “win” physical fights. Now, in an emotional one-on-one session with Iyanla, Kevin opens up about what he wishes his father understood about him all those years ago.

In a three-part, multi-week episode of OWN’s award-winning series, spiritual life coach Iyanla returns to the “House of Healing” with six African American men struggling with broken spirits and broken hearts. The men—which include a man attempting to build a life for himself after numerous stints in jail to a former singer who struggles with feelings of abandonment to a father looking to mend a relationship with his famous socialite daughter—are struggling with their identities due to the effects of feeling criminalized, dehumanized and victimized by society.

Check out the clip above featuring Kevin McCall.

Michael McCary of Boyz II Men Fame Sums Up His Feelings of Ex-Bandmates below:

Summer may quickly be slipping away, but the season is just starting to heat up thanks to upcoming television and film premieres from entertainment’s newest heartthrob and man-crush, Kofi Siriboe. This month, the 22-year Los Angeles native boldly covers Upscale’s Best of the Best issue swathed in show-stopping looks from Italian fashion-house Etro. 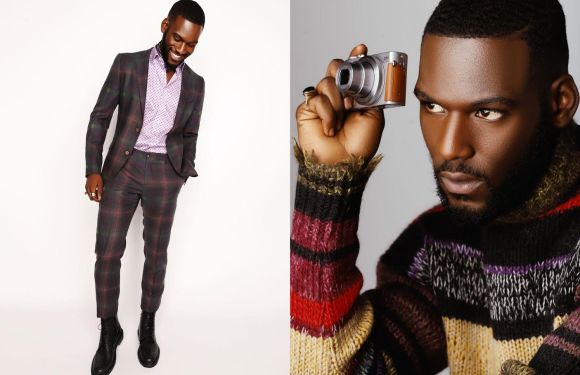 During the exclusive shoot in Atlanta, Siriboe told Senior Editor, Satchel B. Jester:

“”I’ve always wanted to reach beyond just entertaining, with an overall goal of being reflective and introspective in everything I attempt.”

He also acknowledges his newfound “bae” status and says:

“I was a little chubby boy that was homeschooled, so I was a bit different.  I never did prom and those things. I always laid low, but now, I’m getting used to it!”

Evident by his premiere magazine cover, September is a huge month for the primetime maverick who made his debut in the highly anticipated OWN Drama Queen Sugar, originating the role of “Ralph Angel Bordelon” that aired on September 6th & 7th, and he will be playing the male supporting lead of “Flaco” in the urban coming-of-age film Kicks, which makes its debut on September 9th.

Get more of Kofi’s cover story by subscribing to Upscale Magazine HERE or pick-up at your local newsstand.

This week, OWN: Oprah Winfrey Network hosted a private screening event at The Lot in West Hollywood to celebrate the premiere of “Greenleaf” the network’s highly anticipated new original drama series. The family megachurch series, which features Oprah’s first recurring scripted television role in two decades, takes viewers into the unscrupulous world of the Greenleaf family and their sprawling Memphis church where scandalous secrets and lies are as numerous as the faithful. After the screening, Oprah gave welcoming remarks and invited guests to join her at the Memphis BBQ reception that followed. 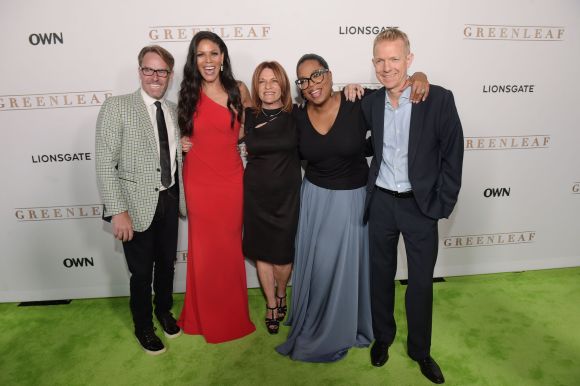 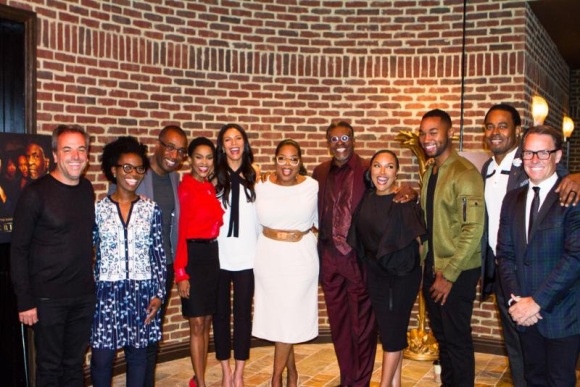 Yesterday, OWN: Oprah Winfrey Network gave a small group of New York press a first look of its new mega-church drama series “GREENLEAF” at a private luncheon at the Roxy Hotel. 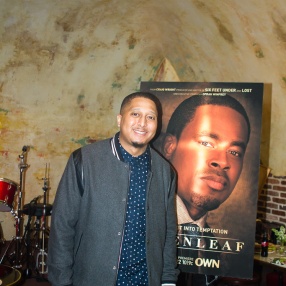 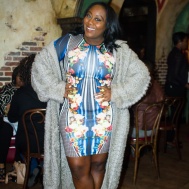 Team SFPL: Gabriel Williams & Rae Holliday and many other media outlets and influencers were on deck for the exclusive event.

“GREENLEAF” centers on the journey of estranged daughter and disillusioned preacher Grace Greenleaf (Merle Dandridge, “The Night Shift”) who has returned home after 20 years on the occasion of the mysterious death of her sister, Faith.  As she reenters the world of Calvary Fellowship World Ministries, the Memphis megachurch run by her powerful parents Bishop James Greenleaf (Keith David, “Enlisted” and “Community”) and Lady Mae Greenleaf (Lynn Whitfield, “The Josephine Baker Story”), it becomes evident that things are not as virtuous as they seem and that the family’s outward display of faith hides sin and misdeeds.
“GREENLEAF” premieres two-nights: Tuesday, June 21 at 10 p.m. ET/PT and Wednesday, June 22 at 10 p.m. ET/PT on OWN.  The series will regularly air on Wednesdays at 10 p.m. ET/PT for the remainder of its 13-episode first season. “Greenleaf” is produced for OWN by Lionsgate Television.
Check out a sneak peek of “GREENLEAF” here: www.OWN.tv/Greenleaf
Photo Credit: Bernard Smalls for OWN
Check out more pics below:

After much-anticipation, the visual that everyone has been waiting for is finally here! Drake releases his new video “Energy” under Apple Music magnitude. Gloriously, flaunting his new music home, Drizzy drops the most hilarious pop-cultured themed story known to man.

I think it’s one of those moments where I really hit the nail on the head at that given moment,” Drake told Zane Lowe on Beats 1. “This treatment is something that I’ve had in my head for a while.”

In two days, Evelyn Lozada‘s new docu-series, “Livin Lozada,” premieres at 9PM ET/PT on OWN. Get a sneak peek of what’s to come on the reality star’s new project, which displays her moving on with her life; with a new baby, new attitude, and upcoming business ventures.