Last Night in NYC, Team SFPL was invited to attend a cruise hosted by Nicki Minaj to celebrate the launch of her new beverage, Myx Fusions. The cruise was also a celebration for Nicki’s hype man, ScaffBeezy. Attendees  boarded the yacht at Pier 59 for the all-white-themed “Myx & Mingle Cruise” in New York on Thursday.

Guests enjoyed complimentary bottles of Myx as well as a FULL open bar and passed hordevours and enjoyed the sounds of several DJ’s the evening, which concluded with a fireworks spectacular. There were plenty of notables on deck including; Tahiry Jose, Yandy Smith, Rich Dollaz, Ebro of Hot 97, Jennifer Williams, Necole Bitchie, Sharon Carpenter, Ms. Drama, and Busta Rhymes just to name a few.

The boat was so festive and celebratory that at one point, the captain told guests to move to the right side of the boat because it was leaning to the left. Nicki grabbed the mic immediately screaming,“We don’t want to sink!”

They raffled off gift bags, which included her pink Pill speaker, Pink Friday fragrance, and Myx.

“I’m so honored that you guys chose to spend Fourth of July with us,” she said.

All white everything was the theme for the event, and for the most part, everybody stuck to the theme. Step into a few of the guests on deck …

Singer, Baiyu is on deck …

Yandy, Jennifer Williams and Tahiry smile for the SFPL camera.

Nicki Minaj walked around and personally greeted and thanked everyone in attendance very dope!

Nicki Minaj cracks a smile for us!

The birthday boy Scaffbeezy chose to stand out from the rest decked out in all red.

It wouldn’t be the Fourth of July without fireworks.

That’s how Nicki cuts a cake.

From Nelly’s upcoming album M.O., check out his new jawn entitled “Get Like Me” featuring Nicki Minaj and Pharrell Williams. Also, within her verse, Nicki Minaj gives a shout-out to our fly girl Necole Bitchie! Check out the track below…

END_OF_DOCUMENT_TOKEN_TO_BE_REPLACED

Love and Hip-Hop Atlanta made it’s return to television last night, K Michelle follows up with the release of her video for “I Just Wanna”. The video premiered exclusively on our blogger sister Necole Bitchie’s site today. In the video K Michelle sings about just wanting a sexual relationship with no feelings attached while eyeing her neighbor across the street. She does her best to get her neighbor’s attention which whom likes to spend a lot of time in his window. K Michelle pretty much sang what every guy (including myself at times) would love to hear from the opposite sex.  Step into the visual for K Michelle’s “I Just Wanna” below.

END_OF_DOCUMENT_TOKEN_TO_BE_REPLACED

Last night November 15th McDonald’s celebrated the launch of it’s national DJ competition with an exclusive VIP Launch Party. The party was held in the heart of NYC at McDonald’s Times Square location, the party’s host were blogger/entrepreneur Necole Bitchie, Bow Wow and up and coming rapper Astro. Team SFPL was in the building celebrate with McDonald’s peep the pictures after the jump.

END_OF_DOCUMENT_TOKEN_TO_BE_REPLACED

Our Sister Blogger, Necole Bitchie, recently caught up with Ciara for an intimate chat while she was in New York City promoting her new single, ‘Got Me Good’ and celebrating her birthday.

END_OF_DOCUMENT_TOKEN_TO_BE_REPLACED

On Friday August, American Airlines, through BlackAtlas.com, announced actor Laz Alonso (pictured here with Jennifer Williams of VH1’s Basketball Wives Miami) as the new travel ambassador of BlackAtlas.com at a private launch party and press conference at the Studio Museum in Harlem.

Team SFPL (pictured here with Celebrity Blogger and friend of the Fly People, Necole Bitchie) were invited to witness the new travel ambassadors inauguration as he will host several travel videos featured onBlackAtlas.com and represent American Airlines and BlackAtlas.com at select events. 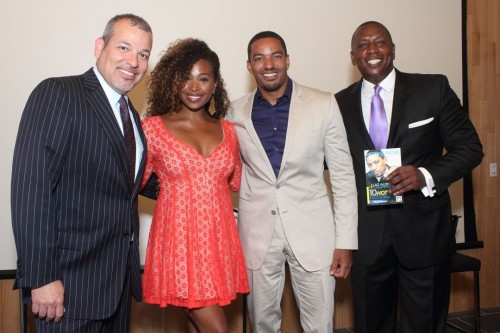 Make sure to take your talents to BlackAtlas.com for more info on the program and its incentives.

I’ve had the pleasure of working with Uber Blogger Necole Bitchie for well over a year now, and I must say she’s an amazing person. This is why when we watched her win the 2011 Soul Train Award for Best Soul Site on air last week we were overjoyed! Necole works extremely hard and deserves all the accolades and success she’s receiving! She’s proof that hard work and determination truly pay off.

She’s truly an inspiration to us!

Read on as Necole talks about her reason for creating her website, juggling her site, schedule and social life , and what future bloggers should do to obtain great success as a blogger.

1. Necole, What were you thinking when you FIRST started NecoleBitchie.com ? What were your plans in the beginning?

Well at first I didn’t have any immediate plans when I started my website[laughs]. I was going through a difficult time in my life at the time where I couldn’t really get my foot in the door in the music industry (I always wanted to work for a music label). After I moved to New York and doors kept slamming in my face, I eventually ran out of money. So I had to move in with an aunt in a very small town in Maryland and since there were no opportunities in entertainment there, I started playing around online and created a blog.

When I first started, I didn’t have the idea that it would be some huge website. I more so started it with the intention of using it for my portfolio. I believed that if I created a product of my own, and marketed, branded and promoted myself in the same way I would have done an artist’s project if an actual label had hired me, I would be able to use that as the portfolio to eventually get the job I wanted. That was my mind frame at the time, however, the site grew faster than I could have imagined, the checks started coming in and I never had to send out another resume again.

2. Being the face of your brand can be a gift and a curse, how do you keep up with appearances and a social life and still manage some of the best updated coverage on the Internet?

Speaking of social life, I have to say that I definitely had to sacrifice my social life and relationships in order for my business to grow. It’s really hard to focus on growing a brand when you are chasing behind some guy or out partying with your friends all of the time, so that’s one thing that I had to let go over the years so that I could focus on achieving my goals.

With that being said, The gift of being the face of my brand is that it opens up a whole new revenue stream from appearances and endorsements and I feel that it creates a greater connection between myself in the audience. I’m no different than the girls that are reading my site every single day. The Curse has been that it does affect potential relationships. People already have this preconceived notion of what they think you are because you’re a ‘blogger.’

Lastly, I would not be able to come this far without a strong team. After a while, I was doing everything by myself like writing, selling advertisement, doing interviews, making appearances and so on and it became a lot to deal. One day I woke up and said, ‘you are either going to burn yourself out and quit OR you are going to have to find people to help you’. So over the past year or two, I’ve hired great people to assist me with growing my business as well as an awesome team who assists me with keeping the site updated every day.

3. Your appearance on the 2011 Soul Train Awards (She won Best Soul Site) was such a triumph for us as bloggers, you were quite emotional, what was running through your head?

First of all, I remember the first time a girl tweeted me and said ‘Congrats on being nominated for a Soul Train Award’ and I was like ‘Girl, you must be misinformed. Soul Train doesn’t nominate websites.’ Boy was I wrong. So that was a huge surprise in itself and I am forever grateful for every single person who voted and helped the site win.

At the actual show. I didn’t know they were going to give me the award at that very moment [during the red carpet pre-show] so I didn’t even have what I was going to say prepared. I had planned to gather my thoughts once I got inside the actual show. So when I went up to talk to AJ and he handed me the award, I honestly blanked out.

In that very moment, I became emotional because I was just thinking about everything that I had gone through over the years. No one believing in my vision, being kicked out, not really having the support that I thought I should have received from family and most of all the fact that I was up there accepting an award on TV and my parents didn’t live to see it. I can’t even explain to you how much that hurt to not be able to call my mom afterwards and said ‘Mom did you see me! I did it’.

I was pretty embarrassed that they were going to show me crying on National TV at first but so many people emailed me and tweeted me afterwards, sharing their stories with me and saying how inspiring that moment was for them so I’m thankful for that.

4. Necole, Because we are so proud of you and your accomplishments, Tell us about what’s next for Necole Bitchie?

The sky is the limit. I could sit and list a million things I want to accomplish but my overall goal is to continue to share my story, inspire and give back.

5. What would be your advice to budding bloggers on the route to building and creating an amazing blog like NecoleBitchie.com?

The key is consistency but you have to have a passion for it. It’s hard to get up every day and stay consistent at something that you don’t really have a passion for so whatever it is you decide to ‘blog’ about, make sure you are passionate about it. Also, know your target audience. If you don’t know who you are trying to reach, it’s hard to tailor your content to them. Lastly, don’t ever let anyone put you in a box or define what you should be and how you should do things. What works for one blogger, may not work for other bloggers and vice versa. If there isn’t a blue print out there for what you want to do with your brand, create your own blue print. You are in control of your life and your success. Claim it.

Keep up with Necole on her Social Network Sites …