Tyga has been in the news quite a bit lately. From his friendship/relationship with Kylie Jenner, landlord issues, his upcoming Fuk What They Talkin Bout album, cameo in the film Dope, as well as a brand new reality show Kingin’ With Tyga on MTV2,  the young rapper stays in the headlines and on the screen. His most recent siting on the web was for the $320,000 Ferrari he purchased for Kylie on her 18th birthday. Many we’re left scratching their heads as to how he could afford such a gift, given he was also rumored to be going through some financial problems.
Well, wonder no more, as it is now being revealed that Tyga has signed a very lucrative deal with Tunes Audio, a well established OEM and ODM manufacturer of in-ear monitors for many well known brands. Signed on August 9th, the deal is worth a staggering $10 Million, making the “Rack City” rapper a part owner of the company.
Having been in business for over two decades, Tunes Audio is known for hand molding countless amounts of in-ears for audiophiles, the hearing impaired, and has been used on stages by some of the most famous musical artists worldwide.
CEO of Tunes, Rolexandro Valentin, issued a statement:

“We are really excited about signing a multi dollar deal with the young star. Not only is Tyga is a trendsetter and a driver of the culture, but he’s also a businessman. We look forward to building this company together. This is just the beginning.”

Boasting a social media footprint of over 27 Million followers, Tyga is definitely one of the most visible artists in music. He too shared a statement:

“I saw what TUNES was doing in the audio world so when they said they wanted to start making headphones, we partnered up.Only boss moves here.”

So with all of the hoopla surrounding Tyga’s time in the headlines in the past year, it has definitely paid dividends.
Congrats King Gold Chains! 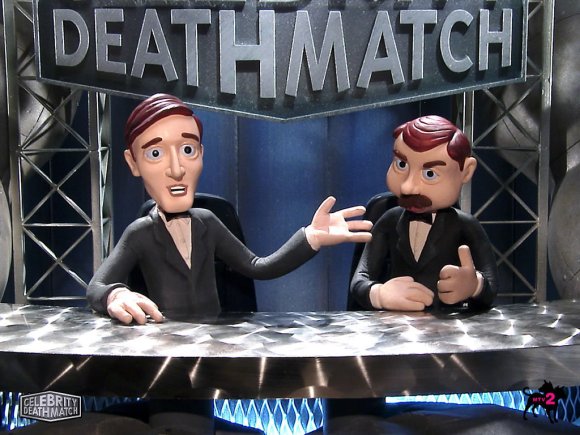 Remember that show that had clay models of your favorite celebs battling to the death? If you do, guess what?  MTV is bringing back the hit show Celebrity Deathmatch,the show that made it cool enjoy your celebs beating each other to a pulp without feeling guilty about it.

END_OF_DOCUMENT_TOKEN_TO_BE_REPLACED

Comedian Lil Duval hits the offices of Global Grind to speak with Blogxilla via ‘The No Judgement Zone’. Duval speaks on his recent success, new tv show on MTV2 and more. Check it out below…

END_OF_DOCUMENT_TOKEN_TO_BE_REPLACED

This week, MTVU’s Random Acts, teamed up with Usher, Macklemore & Ryan Lewis, Nick Cannon and Darren Criss to surprise several worthy students across the country with a kind gesture to celebrate the end of the school year. Starting today, May 6, and premiering throughout that week, MTV, MTV2 and mtvU will air segments in which hardworking, civic-minded students are surprised with appearances, grants and gifts from the networks and some of the biggest celebrities in pop culture. Each segment will premiere on MTV during the 4 p.m. ET/PT hour and subsequently run on MTV2 and mtvU.

END_OF_DOCUMENT_TOKEN_TO_BE_REPLACED

MTV2‘s Week In Jams host Sofi Green pretty much lets us know size matters in her visual for “Some Girls” off her forthcoming yet to be named EP. The turquoise hair beauty gets down and dirty in the visual from hanging off chandeliers, cracking whips and take a bath in a tub full of milk. Fellas if trust me you will enjoy watching this video and ladies as well if that’s your thing of course. The video premiered today on Vibe.com and is directed by Slick and Sofi Green. Peep the very sexy below as well BTS photos from the video-shoot.