This isn’t your average horror film…that’s for sure!

Everybody’s welcome at Ma’s. But good luck getting home safe.

“Sue Ann” is a loner who keeps to herself in her quiet Ohio town. One day, she is asked by Maggie, a new teenager in town (Diana Silvers, Glass), to buy some booze for her and her friends, and Sue Ann sees the chance to make some unsuspecting if younger, friends of her own.

She offers the kids the chance to avoid drinking and driving by hanging out in the basement of her home. But there are some house rules: One of the kids has to stay sober. Don’t curse. Never go upstairs. And call her “Ma.”

But as Ma’s hospitality starts to curdle into obsession, what began as a teenage dream turns into a terrorizing nightmare, and Ma’s place goes from the best place in town to the worst place on earth.

Peep the full trailer above.

The fourth film in the wildly popular Purge franchise serves as a prequel to the previous three films. The Purge: Election Year was assumingly the end of the night of violence disguised as a way for people to “release the beast” but in reality was just a tool for the government to control the population.  As of late, these films feel as if they are right on time regarding the country’s current political climate.

2016’s The Purge: The Election Year dropped right in the middle of the 2016 Presidential Election that featured Donald Trump’s “deplorable” campaign stunningly winning. This year’s The First Purge drops conveniently on July, 4th and features a government scarily similar to the one in charge now but on steroids infused with racism. Franchise writer/director James DeMonaco takes over script duty while Gerard McMurray (Burning Sands) serves as director.

Thanks to the rise of an NRA backed extreme populist political party called the New Founding Fathers who ran on a very pro-America campaign. Sounds very familiar right? The annual night of lawlessness started off as a “simple sociological experiment,” and Staten Island was the testing ground. First introduced by psychologist Dr.Updale (Marisa Tomei) aka The Architect to help push the crime rate down below one percent. The test subjects for this experiment are none other than marginalized Staten Island residents who are offered money if they partake in and survive the night.

There is a large contingent of people who do sign up for the irresistible offer, but there is a group of anti-purgers led by Nya (Lex Scott Davis) who believe the New Founding Fathers have ulterior motives. Insecure star, Y’lan Noel takes on the role of Dmitri a local drug kingpin who is forced to defend the hood he loves and the people in it when he discovers foul play going on during “social experiment.”

The First Purge has a new director, but it stays true to the roots that have made the franchise a phenomenon among moviegoers. The action and visuals fans of the franchise have grown accustomed to seeing are all there. Where this film differs from the others is its blaxploitation spin on it. Noel, Davis and Jovian Wade who plays Nya’s immature brother Isaiah all shine in the movie. The movie will stoke emotions as hired militia dressed up in KKK costumes and donning Nazi S.S. uniforms stalk the hallways of Staten Island projects searching for people hiding from the night. But at the same time will get a rise out fans as the black heroes take on the oppressors who are terrorizing their neighborhood.

The First Purge serves as a big middle finger to our current President and will more than like turn Trump supporters away. There are constant digs at Trump including one self-explanatory one that will surely get the crowd hollering. After watching this film, you will definitely walk out of theater impressed with Y’lan Noel who has the makings to be one of Hollywood’s biggest action stars. The First Purge isn’t perfect, there are some head-scratching moments but if you are a fan of this franchise it definitely serves as another solid entry. We definitely think you should add The Fist Purge into your plans for the 4th of July holiday weekend.

The final trailer for Jurassic World: Fallen Kingdom before it’s June 22nd release is here and it reveals even more information about the upcoming sequel.

END_OF_DOCUMENT_TOKEN_TO_BE_REPLACED

Gabrielle Union is one mother you do not want to mess with, especially if you mess with her kids. A group of robbers learns that the hard way when they take her kids’ hostage while breaking into her father’s house that has impenetrable security.

Guess it isn’t that impenetrable after all.

It’s a race against time now as Union shows nothing is scarier than a mother trying to protect her kids at all costs and uncover exactly what secret her father was guarding in his house. Whatever that secret is, the invaders are dead set on finding it and have no issues hurting her family in the process.  Will Packer (No Good Deed, Obsessed) and Gabrielle Union (Almost Christmas, Being Mary Jane) reunite to produce the original thriller. Billy Burke, Richard Cabral, Seth Carr, Ajiona Alexus also star in the film.

Breaking In arrives in theaters May 11th right in time for Mother’s Day.  Check out the trailer for Breaking In below and treat momma to some dinner at her favorite restaurant and an action pack movie after.

The movie follows three parents played John Cena (Trainwreck, Sisters), Leslie Mann (This Is 40, The Other Woman) and Ike Barinholtz (Neighbors, Suicide Squad) who are on a mission to stop their daughters from popping their cherries on prom night after discovering they made a sex pact.

Together they launch a one-night covert operation doing everything in their power to see that their daughters don’t fulfill the pact. At the same time, they find themselves in hilarious situations while following their three daughters on what is supposed to be one of the best times of their teenage years.

Check out the first trailer for Blockers which arrives in theaters on April 6th below.

Ready Player One, the new movie from the incredible mind of Steven Spielberg had fans talking with its first trailer revealed at Comic-Con. The new trailer just adds to the excitement revealing, even more, details and including even more easter eggs and goodies than the first. ‘

END_OF_DOCUMENT_TOKEN_TO_BE_REPLACED 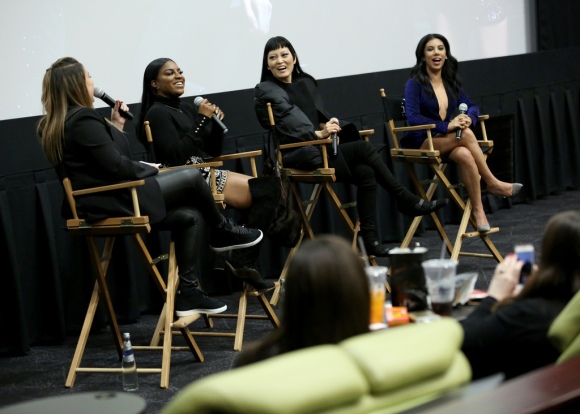 After the screening, Angie moderated a Q&A with the cast to discuss what fans can expect from the latest installment, favorite moments while filming, and which PITCH PERFECT is their all-time favorite. PITCH PERFECT 3 will hit theaters on December 22, 2017.

Fans have been waiting patiently for the first trailer for next epic Marvel film, Avengers: Infinity War putting our favorite heroes up against their greatest threat yet Thanos. We are happy to say the wait is finally over.

Lucky fans got to see the trailer earlier this year at San Diego Comic-Con, someone subsequently recorded it and shared it on the web. The bad copy was viewed quite a number of times before it Marvel snatched it down. Just recently the trailer supposedly leaked and screenshots from it were also shared giving away some hints of how earth’s mightiest heroes looked in the film. Those were snatched down swiftly by Marvel Studios.

Infinity War directors, the Russo Brothers have been teasing fans as to when the trailer was officially dropping by giving very vague hints on their on their Facebook page in the form a countdown.

We also got our first look at the movie poster thanks to Tom Holland aka Spider-Man via his Twitter account.

If that wasn’t enough to get us hyped for the film, Vanity Fair dropped four amazing covers featuring all of Marvel’s cinematic heroes.

After a decade of unprecedented success, @MarvelStudios is at a pivotal moment: the looming farewell to some of its founding superheroes, and the rise of a new generation. https://t.co/JoKFAtWZA5 pic.twitter.com/ed9u2kiNQx

But now we are here, no more waiting if you haven’t already and if you did hell watch it again. It’s an all-out war to protect earth from Thanos and keeping the powerful Infinity Stones out his clutches. So forget all about that lackluster film Justice League and feast your eyes on the first trailer for Avengers: Infinity War trailer below:

Star Wars: The Last Jedi is almost here and yes we are very excited. Today we get a new clip featuring Rey (Daisy Ridley) and her Jedi mentor, Luke Skywalker (Mark Hammil).

In the 40 second clip, we learn that Rey is being tempted by a mysterious force that seems to be far more dangerous than the dark side. Luke is training Rey in the ways of the force and teaching her how to reach out to it. He asks the young Jedi what does she see? She points out she sees light, darkness and something else.

Whatever something else is, it’s calling out to green but very powerful Jedi in the making and she’s having a hard time resisting it. We are not sure even Luke the Jedi Master can protect his young Padawan from the mysterious force that is haunting her.

In Lucasfilm’s Star Wars: The Last Jedi, the Skywalker saga continues as the heroes of The Force Awakens join the galactic legends in an epic adventure that unlocks age-old mysteries of the Force and shocking revelations of the past.

Ohhhh we cannot wait to travel to a galaxy far, far away again. Star Wars: The Last Jedi arrives in theaters December 15th.