Rumored to be a pair and quite in love, Sir The Baptist and Brandy link up for what is to be one of the best soulful, holy ghost filled collaborations this year entitled “Deliver Me.”

Sir narrates through the emotional song, delivering a true story about his sister Mary who would get beat by her husband who was a deacon in the church. While giving the heartfelt testimony, Brandy chimes in with amazing riffs and runs that only the “Vocal Bible” herself can provide.

Today, the PK kid dropped his official album Saint or Sinner that features artists like Brandy’s brother, Ray J, Donald Lawrence, Michelle Williams, Keke Wyatt, DC Young Fly and more. On the project, one particular song that stands out is titled “Good Ole Church Girl” featuring The Deacons. On the song, Baptist confesses his love for B-Rocka and compares their relationship to Jay Z and Beyonce while Brandy sings through his verses.

Check out the full song above.

If you’ve been keeping up with Brandy on Instagram, the songstress has also been expressing her love for her new flame.

Sidebar: BRANDY AND FANTASIA ARE CURRENTLY IN THE STUDIO WORKING ON SOMETHING SPECIAL WITH SPOTIFY. LOOKS LIKE JAZMINE SULLIVAN IS BEING CALLED UPON AS WELL. CHECK OUT THE CLIP BELOW.

Relevé Entertainment, in partnership with Walgreens and the AIDS Healthcare Foundation, is proud to announce the return of The Merge Summit– Los Angeles, taking place August 25-27, 2016 at The Millennium Biltmore Hotel in Los Angeles, CA. The Merge Summit is a unique event created to inspire synergy with faith based and entertainment industry leaders to educate, uplift, and encourage attendees to aspire towards their professional and personal goals.

‘The Merge Summit’ will commence on August 25th with a welcoming Opening Gala. This year’s gala will honor the outstanding accomplishments of Senior Vice President of Prudential Financial- Dorinda Walker, ESSENCE Magazine Editor At Large-Mikki Taylor, founder and senior pastor of Living Word Christian Center (LWCC)-Dr. Bill Winston and Emmy Award Nominated Actor-Courtney B. Vance. This evening will be hosted by celebrated comedian-Cedric The Entertainer and will feature performances by Jonathan McReynolds and Ezekiel (The Poet).  From August 26-27th, 60 top level entertainment executives will lead interactive discussions, workshops and Master Class sessions in personal branding, music, television, film, creative development, and new media. In addition to the enrichment seminars, guests will have the opportunity to participate in the Wellness Lounge® featuring a number of wellness and relaxation services presented by Wellness .  This year’s festivities will also feature a faith based comedy show, CHURCH OF LAUGH LIVE hosted by actor/comedian Jonathan Slocumb, and the FREE-PHYER XPerience Concert featuring Kierra Sheard.

“I’m excited to have The Merge Summit back in LA. It’s the birthing ground for this vision and I am believing for infinite possibilities for all those who attend. All I can say is…”are you ready for this?” says Dr. Holly Carter– Founder of The Merge Summit.

“What a better place to bring the Word than amongst the brightest of stars and influencers in the entertainment industry,” said The Merge Summit Co-Founder and Co-Chair Robi Reed.  “We need as many beacons of love and hope as we can find to light a path in these days and The Merge Summit is the place where those like minds meet.  I’m excited to see us climb to a new plateau this year.”

There’s a new Soul, Rock and Funk Maestro in town and he goes by the name of Charles Perry! Holding down the music fork that has been passed on to him through generations, including from his Grandfather, who was a Doo-Wop legend of the The Jive Five, Charles plans to keep the tradition going, delivering what God has gifted him.

Transitioning from Gospel music, the Brooklyn native plans to represent the Forefathers of Rock & Roll: James Brown, Chuck Berry, Jimi Hendrix — the ancestors who have paved the way for African-Americans in the various genres of music. Perry has donned himself “the representation of the new Generation of Rock Artists.”

About what separates himself from other artists:

The talented singer also talks about possibly doing a Gospel album, if asked — because of his strong love for God. He also, speaks about bouncing back and forth in between genres, and music legends like Luther Vandross that influenced his style.

Mathew Knowles arrived at Power 105.1‘s The Breakfast Club to talk about Destiny’s Child, his start in the music business, Beyonce, a DC Biopic, his new book The DNA of Achievers, seminars and more.

Mathew, later went through his catalogue of artists that he manages from Gospel down to Country genres. He also added, that he has had more #1 records than Beyonce had. [We’re guessing that means past tense?]

Peep the interview to see for your self. At the same time, it’s quite clear Mathew’s mission of the interview was to clear his name on the business side of things, and to let the public know that he is nowhere near being broke. Knowles also once managed rapper Nas during the Illmatic album, he mentions.

However, Mathew does drop a few gems that a lot of artists need to hear.

As the country mourns the loss of the 9 victims viciously gunned down by Dylann Storm Roof, many celebrities have used social media to cry out their condolences to the families who have lost loved ones and to bring awareness to others.

“I have to do it. You rape our women and you’re taking over our country and you have to go.” Dylann Storm Roof right before he opened fire killing 9 members of the congregation. Roof walked into the church and asked who the pastor was and sat and talked with him for almost an hour before he opened fire and murdered them.

The heinous act is already drawing similarities to infamous killing of four black school girls in a Birmingham Alabama church. That was in 1963, and acts like this are still happening today in 2015.

Our thoughts and prayers go out to the city of Charleston and to those personally affected by the tragedy. We hope and pray that this individual is brought to justice swiftly, we will keep you guys updated as more details come in.

Check out your favorite celebs and what all they had to say about the incident: 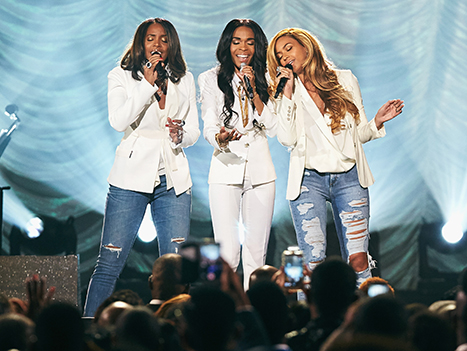 Reunited and it feels so good!

Ladies and gentleman, Destiny’s Child is back on stage for one night only performing Michelle Williams‘ gospel song “Say Yes” at the 30th Annual Stellar Awards in Las Vegas. Performing together after almost 2 years, their harmonies and chemistry on stage is still as tight as ever! Their coveted reunion totally took over social media with fans hoping and wishing for a new DC3 album and tour. Beyoncé’s reps have shut down the rumor but we can still dream, right?

Kelly Rowland and Beyoncé are rocking all white blazers and jeans and Michelle in all white, we can not wait to see what the ladies have for us next!

Even little Miss Blue Ivy was there to watch her Mommy and Aunties on stage performing! 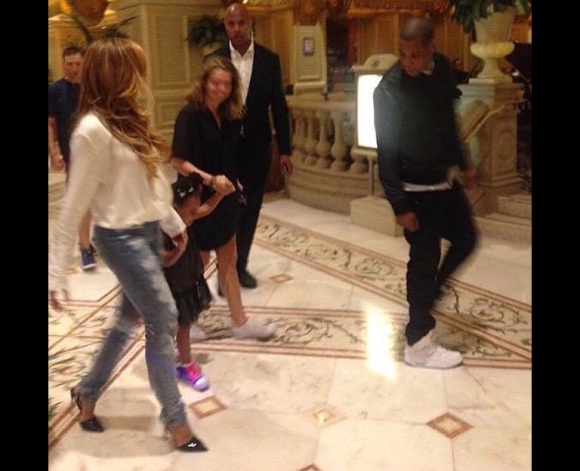 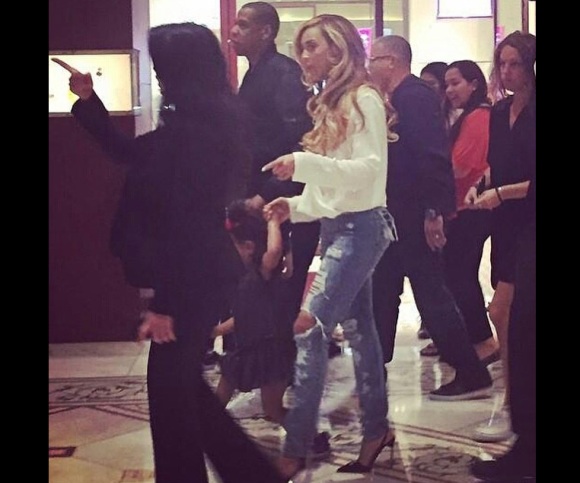 The Stellar Awards, an award show recognizing gospel artists and instrumentalists and their music, will air on TV One during the Easter holiday season from April 5 – May 9, 2015.

END_OF_DOCUMENT_TOKEN_TO_BE_REPLACED

From “Dirty Laundry” to reconnecting with her sisters, Beyonce & Michelle on “You’ve Changed,” Kelly Rowland now teams up with Norwegian hip-hop sensations, Madcon. The inspirational titled track is entitled “One Life,” which is a great anthem that is sure to keep your spirits up.

Peep the visual below….

END_OF_DOCUMENT_TOKEN_TO_BE_REPLACED 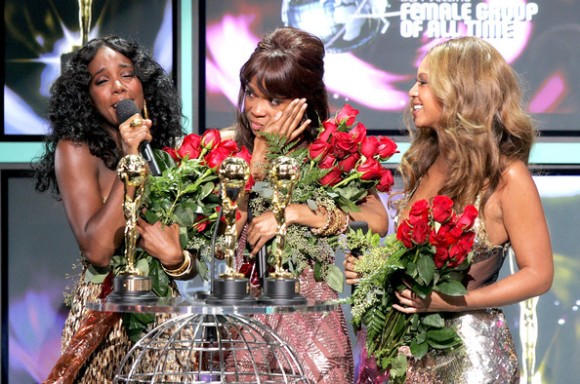 In today’s Daily Word, Michelle Williams Is Lying A River … and Ciara might wanna let Future get his children together!
END_OF_DOCUMENT_TOKEN_TO_BE_REPLACED

Some of our favorite FLY celebrities were potted out and about in Baton Rouge for the 2012 Essence Music Festival! First up was our favorite style maven and Auntie, Bevy Smith, in a floral print dress with pink over tones and pink peep toes, Bevy Looked Stunning!

Next up, was Fly Celebrity Stylist, June Ambrose, who also rocked a floral print dress with an amazing pair of python heel-less platforms!

Looked stunning in a floral print skirt, white blazer and yellow heels …. we see this floral print trend is taking over the Summer!

You know Lisa Raye has nothing else to offer except a good white ensemble. I rock with her consistency … I’m positive that she bleeds white blood.

Michelle Williams Tried it in this metallic gold jumper. Her ode to the solid gold dancers was definitely a #Fail tho

She made up for it in this turquoise number for another Essence event, she washed away her sins with this one.

And Lance Gross is an absolute G for rockin’ the Brooklyn Summer uniform to the events, he’s dead wrong for pairing camo with that flag, but so is half of Brooklyn.