NBA star Matt Barnes recently stopped by Hollywood Unlocked Uncensored to give his side of what really happened the night he found out about Derek Fisher and his ex-wife Gloria Govan were dating.

Matt also gives his own perspective on their relationship and how he felt it should have been handled. Things got a little heated between Matt Barnes and Melyssa Ford while on air, and Matt talks about his plans after basketball.

‘Hollywood Unlocked Uncensored’ is the key to celebrity news, fashion, music and insider exclusives. The weekly radio show airs every Monday at 3:00 pm PST on the Dash Radio App under T-Boz’s iCraft channel.

The number one source of Hollywood News.

HUU is the key to celebrity news, fashion, music and insider exclusives. The weekly podcast airs every Monday at 3:00 pm PST on the Dash Radio App under T-Boz’s iCraft channel.

On the latest episode of Hollywood Unlocked Uncensored, Melyssa invites The Game to discuss the “Melyssa Ford drives a Honda Accord,” lyric from his 2006 single “Wouldn’t Get Far,” Jason Lee stands up to the rumors surrounding his brand, and DoBoy finally shoots his shot with co-host Ms. Ford. 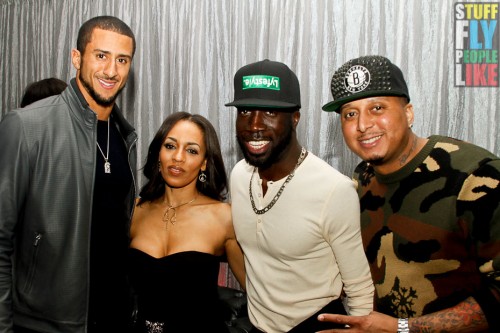 This past #SuperBowl2014 weekend  here in NYC was filled with some of the hottest events and Fly celebs!

END_OF_DOCUMENT_TOKEN_TO_BE_REPLACED

Wednesday night, La La Anthony was anything but mellow at the launch of X-Rated Fusion Liqueur’s new flavor TROPIX, hosted by style expert Daisy Lewellyn. Donning a vibrant yellow Veronique Branquinho sweater, La La got behind the bar of Riff Raffs to shake up some colorful cocktails and joked around with the coconuts at the bar.

END_OF_DOCUMENT_TOKEN_TO_BE_REPLACED

Last Night in NYC at Katra Lounge team SFPL was in the building for the roast of our good friend Kazeem Famuyide. Hot 97’s Peter Rosenberg and comedian Mike Brown were the host for the evening proceedings. Those who were tasked at making a mockery of Kaz’s 26 years of life on this planet (all in good fun of course) were Melyssa Ford, Jamal Jimoh, Dan Charnas, Chris Foxx, JasFly and Jeff and Eric Rosenthal of Itsthereal.com. Ciroc made sure everyone was in good spirits as those in attendance sipped on “Kaz-I-Kazes” (clever), “Coco Losos” and any other way they desired to mix their favorite Ciroc flavor. Checkout the rest of the photos from Kaz’s hilarious roast below.

END_OF_DOCUMENT_TOKEN_TO_BE_REPLACED

Last Week, the Fly Guys were invited to Attend Melyssa Ford‘s private birthday dinner! We were so excited, but got so caught up that evening that we were not able to make it —> 😦  !!!

None the less, we had to do a Special Birthday Post, for one our favorite Ladies!

Melyssa (known to many as one of the most popular Video Vixens, the first to make it a profession) and friends celebrated at the Ricardo Ocean Grill in NYC! She was joined by such notables as Sway (of MTV), Toure, Mike Kyser, Angela Yee, and Jennifer Williams (of VH1’s Basketball Wives Miami) just to name a few! We hear she really enjoyed herself, step into the pics below…

END_OF_DOCUMENT_TOKEN_TO_BE_REPLACED

What a great night!!!

END_OF_DOCUMENT_TOKEN_TO_BE_REPLACED

As usual the scene at 40/40 NYC for Monday Night Lights, was Crazy! The Place was packed From top to bottom, as attendees filled in to see The New England Patriots reign over The New York Jets.

Last Night all served as the going away party for Roc Nation’s Monee Perry. Monee has played a great role in the growth of SFPL and we will miss her  dearly, as she relocates to her hometown of L.A.

Check out our Fly Vixen and dear friend Melyssa Ford! She will attack newsstands on the Winter 2011 Issue of King Magazine! POW!

I love it when the veterans show the new-babies (amateurs) how it’s done! Take that!