It was officially #Meekend over the weekend as they Philly-born rapper celebrated his birthday and decided to drop some new heat for his fans. Powering up three tracks featuring the likes of ASAP Ferg and Young Thug, Meek Mill also released a new visual with his rap cohort Tory Lanez directed by Spike Jordan.

Take a listen to the songs above and the new video “Litty” below.

Migos took some time out from their recent Billboard photo shoot and decided to kill two birds with one stone as they filmed a new video for “Get Right Witcha” right on the same set.

The visual was filmed at Sunset Ranch in Hollywood and directed by King Content.

Check out Meek Mill‘s new rap protege, Mel Love as he debuts his new video “Run It” featuring Lihtz Kamraz, which was directed by Will Ngo. The track comes off of Mel’s newly released mixtape, Silencer 4 and the video premiered recently on BET Jams.

Stay connected to both artists on social media:
@mellove215
@lihtzkamraz

It looks like the Cash Money Dream Team is back together!

Being very public about their reconnection, Nicki Minaj posted a studio picture of herself, Lil Wayne, and yes, Drake. The trio was photographed with all smiles in tow and no caption needed.

Nicki also posted a surprising photo of her and Drake as the two haven’t talked in a very long time since their fall out while Minaj was dating rapper Meek Mill.

#Message: @nickiminaj is about to bring that 🔥! We can't wait! #NickiMinaj #NoLoveLost #ThingsJustGotReal #Music #Artist

Just three weeks ago the PinkPrint Princess announced her single status on Twitter:

“To confirm, yes I am single. Focusing on my work & looking forward to sharing it with you guys really soon. Have a blessed New Year. Love u.”

Since then she has been doing exactly what she said and now teases the upcoming visual to the hit single by Major Lazer featuring Minaj and PARTYNEXTDOOR called “Run Up.”

Not to mention, Barbz has been rocking her “Barbie” chain again that her fans voted for on a recent poll that she made in anticipation of the official visual.

Which one r u? #RunUpVideoComingSoon

Lastly, a new icon has been released for Nicki’s app:

It is safe to say that Nicki is quite busy these days!

Lil Tunechi has a few projects to release this year which includes Tha Carter V that has been teased multiple times between Wayne and Birdman upon their public feud.

Nicki Minaj and Meek Mill have officially called it quits. On Thursday (Jan. 5), the “Anaconda” emcee confirmed what the masses have been speculating for weeks, expressing that she’s looking ahead and focusing on her career.

With a tweet heard around the world, Ms.Minaj opted to keep the update on her relationship status short and sweet.

To confirm, yes I am single. Focusing on my work & looking forward to sharing it with you guys really soon. Have a blessed New Year. Love u🎀

Of course it didn’t take long for Meek to get in his petty bag following Nicki’s announcement with a post of his own which he has since deleted. The Shade Room was on deck with receipts though.

Nicki has so far chosen to take the highroad while the Dreamchasers 4 emcee is clearly in his feelings which may mean he was the dumpee. Ouch!

While rumors were constantly swirling around Omeeka, over the past few weeks the break-up rumors appeared to bear more fact than fiction.

Both Nicki and Meek took to social media to hurl subliminals at each other culminating with the MMG rapper posting a photo that featured the backside of a mystery woman, which has since been deleted but of course hasn’t vanished. Even more bizarre was the accompanying caption:

Let’s take a look at the demise of Omeeka. 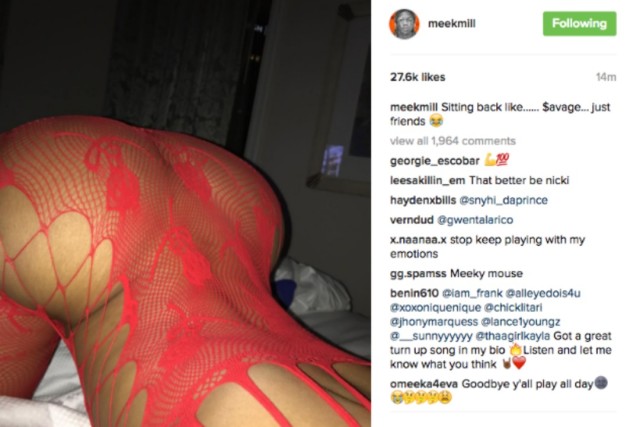 Now that we know Omeeka is no more the question on everyone’s minds is “What happened?” Nicki and Meek were the epitome of a fairytale romance. The couple even sat down with GQ back in July where The Pinkprint emcee gushed,

“I just knew that after our first conversation on the phone, I was in trouble.”

It’s sad to see the once blissfully happy couple call it quits. They weren’t strangers to flaunting their love. Take a walk down memory lane with a gallery of when Omeeka were still an item. We wish both Nicki and Meek best. 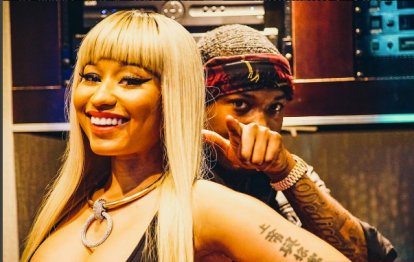 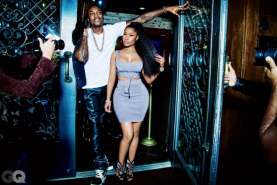 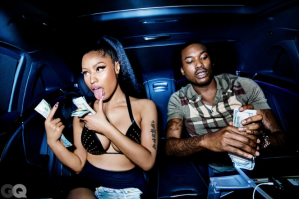 As 2016 comes to a close, it is clear that RRose RRome is looking to  keep the momentum at an all-time high. Already having released records with some of New York’s most notable lyricists, the Brooklyn native is coming off the release of “Ziploc” featuring Jadakiss and has his sites set on closing the calendar year off with a bang.

Adding his own spin on Meek Mill and The Game‘s “Soundtrack,” RRome unveils the visual for “R.N.L.”.

The Beanie and Meek Mill beef doesn’t look like it will end anytime soon.

Beanie Sigel claps back in the visual for “Gang Gang”, directed by Du’Juan Lewis, produced by H. This track was produced by John Harrison and Kenneth D. Sullivan. This makes the third diss track that Beanie has directed to the MMG rapper.

Check out Sigel beef retaliation above.

ell this beef was unexpected! Meek Mill has another rapper to worry about besides Drake now, west coast MC The Game is now throwing shots at the Philly rapper.

Things picked up this morning when The Breakfast Club premiered Game’s record “92 Bars” (posted above)  which featured some pretty choice words for Meek. Folks were completely thrown for a loop by the diss that apparently stems from Meek “snitching” on The Game, about what though no one has a clue yet..

On the song Game takes some serious jabs at Meek,he even goes as far as to bring up Meek’s girlfriend Nicki Minaj in the song.

She got a couple mill and she don’t even know Meek
And ever since that nigga snitched on me we just don’t speak
See that shit you got with Drake is like a slow leak
Blood’ll be dripping like Niagara if I poke Meek
Nicki won’t get no sleep, I’m coming through at 4 a.m
Four deep, to leave his dead body on the soaked sheets
It could happen lowkey
You better have Ross call me or you gon’ be eye level with a roach feet
This ain’t a diss, nigga
This is all lives matter except this nigga’s
This 1992 shit ain’t no new shit
We in that all black you won’t know who Blood and who Crip
With guns big enough to sink a fucking cruise ship
Fuck around and be a news clip with them loose lips
My nigga Drizzy packed you out and you ain’t do shit
This the Golden State and my shooters ain’t on no hoop shit
Nigga you know that I’ll snap you like a toothpick
And snitching on niggas ain’t never been no cool shit
And I’ve been wanting to give Nicki this pool stick
So tell your lil’ vibrant thing come fuck with Q-Tip
We know where you live, nigga, you better move quick
And start thinking twice about who you hop in the coupe with

Game didn’t stop there he took the attack to his favorite social media platform Instagram and posted a picture of himself and Nicki Minaj from her video for “Pills and Potions”. In the caption he states “The last time Nicki held a REAL N***A”. He has followed that post up with some old photos of Meek Mill before the fame and he is going in.

The last time Nicki held a REAL NIGGA !!! 🐀 #7thGradeBodyHavinAssNigga Everybody know you the wife nigga…. If she take her followers back, you gone be back at 100k !!! #Snitch 🧀🐀 #RatsWillDoAnythingForCheese #WeakMeal

Whoopi Goldberg come get yo son….. (Walk in the salon like gimme the tarantula) 🐀🐁🐀🐁🐀🐁🐁🐀🐁🐀 #PredatorWantHisWigBackNigga

Well damn, not one to bite his tongue as we learned during his beef with Drake, Meek Mill responded back to The Game on Instagram. In two posts (now deleted) one of them a picture of Nicki kissing him on the cheek, Meek addresses the fact The Game wants to fight him then dropped a diss record and conveniently released pre-order links for his new album 1992. Meek even makes light of the situation stating the Iphone 7 dropped today and that folks don’t want to hear it.

Well one thing is for sure folks are definitely reading about this confusing beef on their new Iphone 7’s. This beef has already gotten into dangerous territory with The Game including Nicki Minaj in it. One thing we know about Game when it comes to his beefs with other rappers is that he is relentless. The timing of all of this is very convenient, and we are definitely scratching our heads at this one and we don’t know why this is happening but like Charlamagne tweeted earlier we like rap music.

We will definitely be keeping our eyes and ears focused on focused on this beef.

“Represent” follows his last drop “Love For Real,” which featured a crazy verse from Meek Mill which set the Net on fire.

Other features on ‘TrapNati 2’ include Wiz Khalifa and PNB Rock with production from Ricky P, Cardo, Christo, TM88 and more.

#Recap After The 2016 BET Awards…It Was The AfterParty at Hyde Sunset!

Hosted By 2 Chainz and Lil Wayne and activated by #TeamHennessy #LA. It was definitely a star studded event and a packed house.

Last but not least, Hip-Hop Couple, Nicki Minaj and Meek Mill were in the building as well.

The celebration was definitely ALL THE WAY UP!!!