Nicki Minaj may be busting out of a few windows, but that doesn’t mean she can’t grace another cover of the one of the hottest magazines. The chart-topping Minajesty teams up with Mario Testino and V Magazine for quite an epic shoot.

END_OF_DOCUMENT_TOKEN_TO_BE_REPLACED

Beyoncé has lent her beautiful talents to Vogue for their March 2013 cover! After destroying her Super Bowl halftime performance, and announcing the “Mrs. Carter World Tour”, The superstar now graces the fashion bible’s annual “Power” issue!

END_OF_DOCUMENT_TOKEN_TO_BE_REPLACED

Singing sensation, Brandy covers the December 24th issue of Jet Magazine! Inside she talks about everything from her new label and album to her thoughts on love and marriage.

END_OF_DOCUMENT_TOKEN_TO_BE_REPLACED

Marlo Hampton may no longer be a on Bravo’s Real Housewives Of Atlanta, but the style maven is still the best dressed woman in those Atlanta Streets!

END_OF_DOCUMENT_TOKEN_TO_BE_REPLACED

Last Night in NYC, Team SFPL was on deck for Colgate Optic White and Rolling Out Magazine‘s “Mirror Mirror” Awards, held at the Union Square Ballroom.

END_OF_DOCUMENT_TOKEN_TO_BE_REPLACED

So this is where my Wednesday is going?

Ricky Rozay has landed the cover of Rolling Stone Magazine. A shirtless Ross Suns the world for Rolling Stone under the headline “Gangster of Love.”

In the issue, President of Maybach Music chats about his seizures, support for freedom of speech and the right to bear arms, and his high school days. He also opens up about his past as a corrections officer.

On his weed addiction, which contributed to the seizures he had last year:

“I’m most definitely an avid user, a pothead, however you want to look at it. I call it green caviar. It’s like a short vacation—it helps me chill out. And people really love it when I chill out, because I can really be a dickhead.”

On his past as a corrections officer:

“This was my best friend, who I ate peanut-butter-and-jelly sandwiches with, and pork and beans with, my buddy, my partner, my number-one dude. Suddenly I’m talking to him over federal phone calls. Hearing the way it was building, I knew I couldn’t take nothing for granted,” says Ross. “My homey’s father was a huge influence on my life, too . . . He was the one who was like, ‘Yo, go get a job somewhere, man. Go be a fireman. Or go be a fucking corrections officer. Just go sit down somewhere.”

On his time attending a Christian school:

“They wanted me to learn the Ten Commandments. I told them I didn’t really have time for that right now,” recalls Ross, who was an offensive lineman in high school football. “I got through high school on my popularity and shit. … But my grades was never good. I was never good at math.”

On Chick-fil-A’s stance on gay marriage:

“Chick-fil-A obviously took their stand. That’s their right—the same way the pro-gay people are taking their stand. I believe everybody got the right to live their own life the way they want to.” But he has no plans to boycott. “Naw. I love that spicy chicken.” 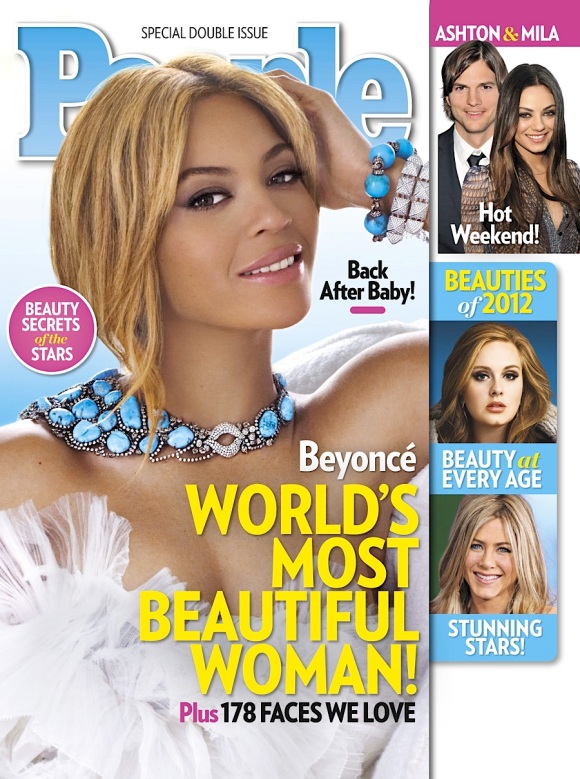 *Ahem* This post requires as little wording as possible. It’s as if Jesus wrote this one himself.

People Magazine has deemed the World’s most beautiful woman, Beyonce ‘Mother Of All Things Good & Ivy‘ Knowles .. ‘The World Most Beautiful Woman’.

Who’d you think they where going to name, Kim Kardashian?

Peep The Behind The Scenes Video Footage Here.

There She Goes!
Online French magazine Ghubar strikes again with an amazing covershot of Angela Simmons for their Spring issue!
In the interview coupled up with a 5 pages fashion spread shot by Louiza Vick, Angela talks to Editor-in-chief Sarah Diouf about how she had to adjust to being watched 24/7 back to the Rev’s House, her business adventure with her sister Vanessa, and her fashionista debuts. Angela was styled by friend of the Fly People,  Ugo Mozie & Daver Campbell.
The issue will go live on April 9th – only on www.ghubar-magazine.com
#WeLike
Yes MRS. KEYS!
Inside the  upcoming April/May 2012 Issue of Vibe Magazine’s Global Issue, Alicia Keys opens up about her and her husband, producer Swizz Beatz began their union. Alicia and Swizz were interviewed together for the issue and the two discussed how they ended up becoming soul mates, as well as their marriage life and struggles they had to overcome over the past few years.
#WeLIke
I’m feeling her look, Alicia has kind of struggled with a look that works, but this is on point.
Your Thoughts?
Read more over at Vibe Magazine
-Stay Fly!
Po Johnson of VH1’s LaLa’s Full Court Life recently glammed up those talents for PYNK Magazine and talked about her life in front of the camera, music and dating.
On her love life:
“I’m not dating anybody, I’m not seeing anybody, I’m not fucking anybody, I’m not sexting anyone. I am on pause in regards to a relationship zone. I’m very much married to music. I don’t even have the time to be emotionally responsible, and I feel bad, but it is what it is.”
On accepting herself:
“You have to be like, “Fuck it, this is me. I like crawfish and crabs. I’m 5’4”. I’m from the south. I had a stuttering problem. And I want be a fucking artist. My name is po. Fuck you if you don’t like it.” Once you let those inhibitions go, everything else is irrelevant. I owe it to the audience that’s watching; I owe it to all those little girls; I owe it to all those people who feel like geeks and weirdos, I owe it to them to let them know that this is cool. You don’t have to be a part of the masses. What everyone sees on TV is me celebrating the fact that I’ve owned that. I’m not going to apologize for who I am, and I’m not going to apologize for who I want to be.”
More over @ Pynk Mag
-Stay Fly!

I’m so over the Basketball Wives till I can’t take any of them seriously. Seriously. She looks good though.

And the fellas of Mindless Behavior, are KONTROL Mag’s second cover.  Among other things, the guys reveal why they’re on a mission to become the next great boy band. We’re missing one, so that lane is WIDE Open. Seize it fellas!

Kontrol actually goes national with this issue and hits news stands, and these two subjects will sell copies, smart move.