Puff & The Fam just performed the song at the 2015 BET Hip Hop Awards along with another new joint entitled “The Auction” featuring Styles P, Lil’ Kim and King Los.

Check out PD&F’s version of what “Workin” means below:

Today, details paired with more messiness in the Lil Kim vs. Mr. Papers custody battle over baby Royal Reign have come to the light.

Via court docs obtained by Bossip, Kim claims Papers abused her. Conversely, in an excessive interview with someone close to the situation, claims of domestic violence are vehemently denied.

Mr. Papers aka Jeremy Neil has been trying to see his daughter Royal for sometime now, as he filed for visitation just last month. As he processed the paperwork, he asked: for one day a week to parent Royal Reign, and even agreed to have a court-approved monitor supervise the visits.

But Kim has been blocking him from seeing their child at all. Since the blockage was still in effect, Papers asked the courts to step in and handle the situation.

Later, the July 9th hearing had approached and Kim was a no-show. Instead, the veteran female rapper filed her own documents accusing the up & coming mc of domestic violence.

Papers denies the claims and believes it’s a stunt to try and prevent him from seeing his daughter further. Says that, being faithful and infidelity took place in their past relationship, but not violence.

Both Kim and Papers will end up back to family court based on the allegation this week.

What are your thoughts?

We will keep you updated on what happens next.

Shouts out to: Bossip

With May 2nd, approaching we can finally countdown to the Floyd Mayweather vs. Manny Pacquiao boxing match at MGM Grand in Las Vegas. People have arranged to fly into Vegas from all over, many have spent between $4,600 and $17,850 on tickets, and 50 cent and Mayweather are even friends again. Yup. The anticipation is real.

After publicly offending one another — 50 saying Mayweather couldn’t read and Mayweather calling 50 irrelevant the two have linked up and killed the noise. 50 took to Instagram to post a picture of him down in Vegas long side Mayweather, referring to him as his brother. 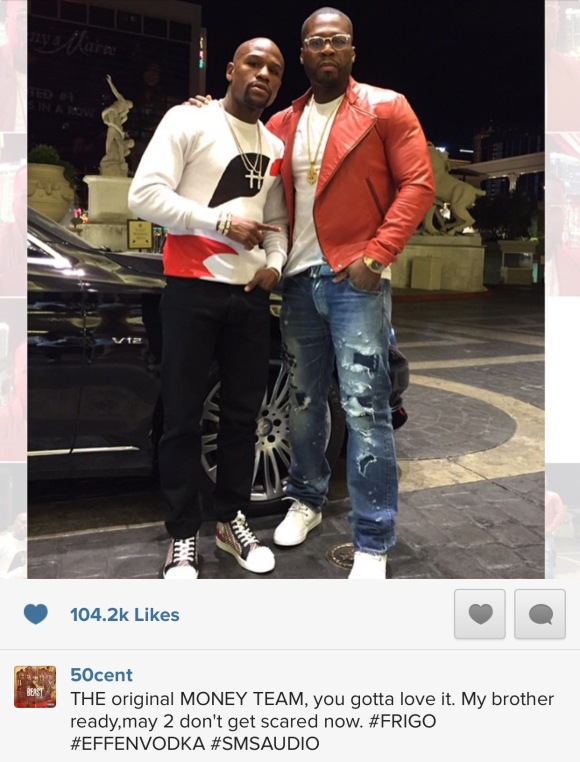 7 days away from the fight and about a year of a funny but “family feud” the drama has died down. Thank god. Irrelevance jokes, women beating allegations, the cat in the hat tests have finally passed…
Looking at the game there’s been a few feuds that we’d love to see reconciled. Check them out after the jump!

The non-profit organization, founded by Antoinetta Hairston, raised funds at the event  to further their mission to mentor, inspire, and empower young girls from the inner-city or low-income households to help them develop their talents and gifts in arts and entertainment from an early age.

Others in attendance: Julissa Bermudez, Stephen Hill, Head of Programming for BET, Alesha Renee, Gloria and Laura Govan, Shamicka Lawrence, NY Giants Wide Receiver, Kevin Ogletree, and Denver Broncos Safety, Omar Bolden were a few of the celebrities and tastemakers bowling for a great cause as donors enjoyed custom Hennessy cocktails, and music by Jae Murphy.

More of Seen On The Scene after the jump…

In case you missed it…check out this week’s hottest new music and visuals all in one shot from the likes of; Rae Sremmurd, Lil Kim, 2 Chainz, Kendrick Lamar, O.T. Genasis, Ca$h Out, Angel Haze, Rick Ross, Fetty Wap & more!

News has surfaced that Lil Kim may be in a little tax trouble, yet again! Read more below…

END_OF_DOCUMENT_TOKEN_TO_BE_REPLACED

The most soulful time of year is here again! This month, the annual SOUL TRAIN AWARDS (#SoulTrainAwards) comes back to Centric, a BET Network. Centric, today’s 24-hour music and entertainment channel for African American and multicultural viewers, airs the 2014 SOUL TRAIN AWARDS Show November 30th @ 8 pm/7 central.  The SOUL TRAIN AWARDS is dedicated to celebrating and honoring R&B’s finest and most soulful artists in front of legions of dedicated fans.
END_OF_DOCUMENT_TOKEN_TO_BE_REPLACED

Nicki Minaj is full of sugar and spice, possibly some Luster’s Pink Lotion, and everything nice…until you piss her off! Here are the top 5 reasons to NOT cross Nicki Minaj! Enter at your own risk…