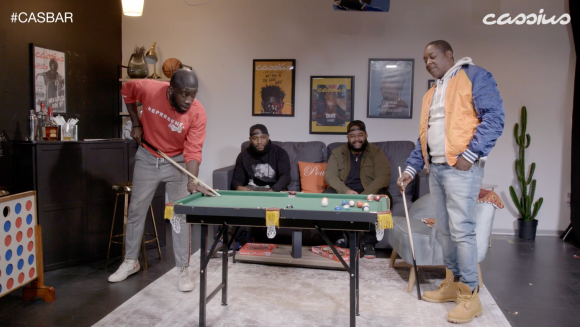 Our family over at Cassuis Life had the pleasure of chopping it up with one of rap’s G.O.A.T.’s, Jadakiss. The brands solicited some of our favorite brothers to be apart of the conversation, including our Co-Creator, Rae Holliday, our Photographer/Editor, Bernard Smalls and The Deputy Editor for Cassius Life, Bruce Goodwin. During the interview, the room discusses Kobe Bryant’s legacy, Michael Jordan for President, and Jada’s new album. The best part however, is Rae and Jada’s hilarious one-on-one over a game of pool, in which Rae has never played before. The results are priceless. Watch the video below, and of course, give us your thoughts.

Embattled former NBA superstar is reportedly “fighting for his life” after being found unconscious in his room in a Nevada brothel.

END_OF_DOCUMENT_TOKEN_TO_BE_REPLACED

The weekend is here and it’s time to highlight all of the kicks dropping and there are quite a few for you to look out for. With all-star weekend around the corner, you gotta have some heat on your feet for the occasion. Checkout the gallery below to see all 18 of your FLY options available for you today and tomorrow.

Looks like after 10.5 years marriage, Vanessa Bryant has filed for divorce from the superstar talents of basketball player extraordinaire, Kobe Bryant.

According to the new CNN … TMZ;

Sources connected with the couple tell TMZ … Vanessa — who stuck by Kobe after he was charged with sexually assaulting a Colorado woman in 2003 — decided to end the marriage because she believes Kobe has been unfaithful … again.

As one source puts it, “She’s been dealing with these incidents for a long time and has been a faithful wife, but she’s finally had enough,” adding, “This one is the straw that broke the camel’s back.”

And our sources say … Kobe “desperately” wants to win Vanessa back and will do “whatever it takes” to save their 10 1/2 year marriage.

According to the legal docs, Vanessa is asking for joint custody of their 2 daughters — 8-year-old Natalia and 5-year-old Gianna — but Vanessa is asking that Kobe get visitation rights, which means she wants the kids in her care most of the time.

We’ve learned the couple has NO PRENUP, so 29-year-old Vanessa is entitled to half of the empire Kobe built over the last decade.

She’s also requesting spousal support … which is typical in divorce cases. Kobe, who filed his response to the divorce minutes after Vanessa filed her petition, says he will pay her spousal support.

According to the docs, Vanessa is being repped by disso-queen Laura Wasser and attorney Samantha Klein. Wasser reps oodles of celebs, including Britney Spears,Angelina Jolie, Maria Shriver and Kim Kardashian.

I really liked them together, but such is life *throws hands up*. Vanessa definitely stuck in there that’s for sure, so if anyone has anything negative to say about her, she can just hit them with the …

It doesn’t look like this will be a messy divorce at all.

And we hope not.

I really love these commercials…

More new ‘ish after the jump…

END_OF_DOCUMENT_TOKEN_TO_BE_REPLACED

Kobe recently collaborated with swiss high-end makers, Nubeo and created The Black Mamba MVP & The Black Mamba Ultimate. The light weight watch is made of grade 5 titanium and ceramic. Only 240 pieces are being manufactured and sold but just 24 pieces will hit the market. The number 24 represents Kobe’s Jersey number of course.