Katy Perry serves things up on a platter in the latest visual featuring Migos called “Bon Appétit.” Prepping for her SNL season finale performance, the “Fireworks” singer is showed captured, cooked and served to a few hunger but yet filthy rich patrons, and is later saved by Quavo, Offset and Takeoff.

The video was directed by Dent De Cuir, and you can also spot an appearance from famed chef Roy Choi.

Between Missy, Bey and Rihanna, the ladies collectively provided us with soundtracks for the entire weekend, and we’re here for it! 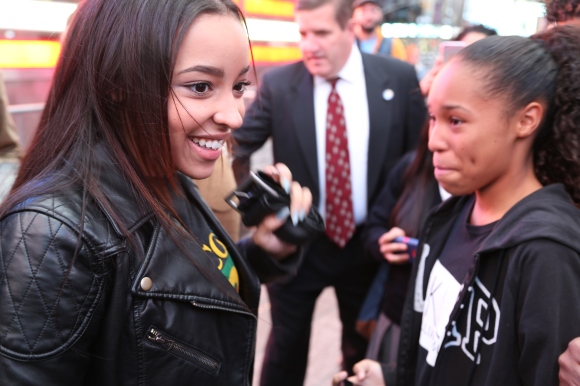 Gearing up for her upcoming sophomore LP Joyride, while having one heck of a year touring with the likes of Nicki Minaj and Katy Perry, triple-threat talent Tinashe debuts her new video “Player” featuring Chris Brown — and she did it all right in the middle of NYC’s Times Square.

Right before the transition to the premiere destination, the singer selected a few fans, along with some media conglomerates (including SFPL) and personally invited them on a private party bus ride to Times Square.

Tinashe signed autographs, took usie’s, pics and more with every single fan including a few that spotted her from the outside of the bus! It was such a great sight to see and we were happy to be onboard to experience it.

As soon as, Tinashe hit the pavement of the historic landmark, Times Square, she gravitated to fans immediately taking more pics and signing autographs.

At this point, it was premiere time as the new visual played at exactly 4:30pm on the dot! Tinashe was ecstatic!

Congrats to Tinashe on yet another successful video!

Check it out below in FULL:

Pictures by Gabriel Williams (of SFPL)

The Brooklyn native weaves together very personal scenes within the short film opening up with the celebration of her 25th birthday. Barthe opens up about her struggle with depression, suicide, and her weight loss journey.

She is also known for penning pop hits for superstars such as, Rihanna, Katy Perry, and Miley Cyrus and in the film she discusses how those collaborations came about.

Along with her critically acclaimed album, ‘BEcoming’, Stacy also recently released the video for her new single “Here I Am” on LATimes.com. The black-and-white, Ryan J. Francis-directed video features Barthe singing in an acoustic setting with shots of her being tempted by her alcoholism. The short film gives fans a glimpse into the rather-mysterious singer’s personal and professional life. ‘BEcoming’ is available for purchase on iTunes now.

“At 17 songs, ‘BEcoming’ is weighed down by the sheer heft of its subject matter, but when taken as a whole, it feels like a powerful and necessary purge.”

“a powerful, raw narrative about the joys and pains of life, tracing Barthe’s own struggles with body image, attempted suicide and hard-won self-love.”

Despite penning pop hits for Rihanna, Miley Cyrus, and Katy Perry, the single “Here I Am” is a somber message that is brought to live with powerful acoustic instrumentals and Stacy’s soothing voice.

“Directed by Ryan J. Francis, the black-and-white visual weaves together clips of Barthe singing a live acoustic take of the introspective number while dealing with her struggles with alcoholism, an issue about which she’s been vocal.”

Check out the visual below:

A special interview with Stacy via SFPL coming soon.

‘BEcoming’ is available on iTunes now.

Rihanna seems to be the topic of conversation amongst males and even females from all over the world. Today, Yo Gotti praises Bad Gal Riri on a dope new track named after Ms. Fenty herself. Tagged in the collaborative effort is ATL’s own, Young Thug, spitting his signature sound on the flirtatious song, shouting out the likes of: Madonna, Katy Perry, Miley Cyrus, Alicia Keys and more.

This week has been quite the #VictoryWeek all across America. First, the removal of the Confederate Flag, then the Supreme Court’s decision to uphold Obamacare, and now Same-Sex Marriage becomes a Right nationwide. This is why the hastags #SCOTUS + #LoveWins have been trending all day.

President Obama is doing a great job tackling different tasks before his exit out of the presidential seat in 2017.

Below, celebs like Solange Knowles, Questlove, Gabrielle Union, Jussie Smollett, Kelly Rowland, Katy Perry and more give their reaction on the worldwide decision, celebrating equality on this good Friday.

Check it out a few pages after the jump…

Madge is back and she’s back with a vengeance!

The head Bitch in charge swings back into action with a brand new visual with pops of color entitled “Bitch I’m Madonna” featuring the Pink Princess, Nicki Minaj — starring Beyonce, Katy Perry, Miley Cyrus, Chris Rock, Kanye West, Rita Ora and more. You will also catch a few more cameos from a few of Madonna’s closest friends in the industry.

We go hard or go home, so we had the #QueenofPop, @Madonna, drop her new video.https://t.co/APe38sLYLs

Peep the video in full below:

Ester Dean has been on quite the promo run this week!

Fly Girl @Esterdean Stopped By Our Offices Today. Be Sure To Check Out #PitchPerfect2 In Theaters May 15th

Just last, stopping by our offices here at SFPL, the fearless hit-maker headed over to Power 105.1‘s The Breakfast Club and talks about the countless hits that she’s penned for the like of; Beyonce, Rihanna, Katy Perry, Nicki Minaj and more. She also talks about her upcoming movie role in Pitch Perfect 2.

Check out the interview in full below: