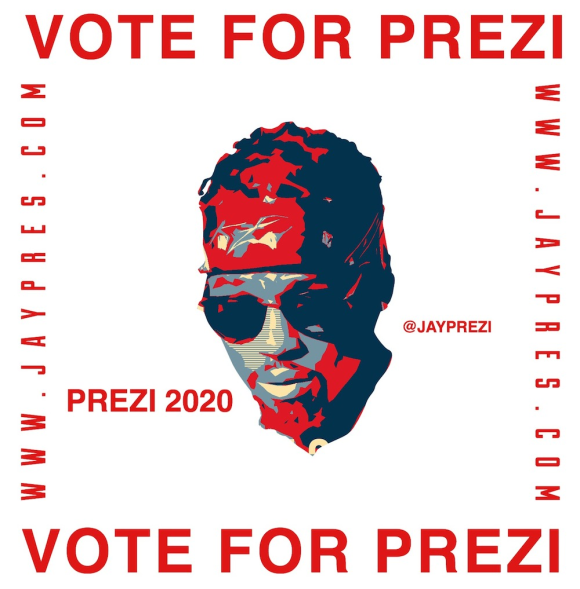 Available on key music and Hip-Hop streaming platforms like Spinrilla and Datpiff, the project provides 10 tracks with production from Grammy-winning producer Chase N Cash, Evan Brown Of Key Majors, High Volume Music, & Stercity, in addition to Prezi’s self-produced track “Flexin.” Always keeping his fellow peers and family in close proximity, the budding artist collaborated with fellow Harlem natives Kadeem King & Qu’ality for a couple bangers not to mention having his father, who tours with Prezi’s uncle Roy Ayers, throw some soulful vocals on the intro.

Jay and his team wanted to take a different approach on the campaign for the project giving a different promotional twist. In a world dominated by social media, they decided to hit the streets and flood several NYC neighborhoods with the cards that you see above. Supporters began posting the cards on Instagram, Twitter, and Snapchat by the hundreds.

Jay Pres spoke on the method to his madness:

“We just wanted to build traction, get some new people listening so I went and bought 15,000 cards and we went to every projects, throwing them on the floors, literally flooding the streets,” Prezi said recently. “As far as the music goes I feel like this project shows my growth as an artist. It¹s one of them tapes where everyone is gonna have a different favorite. And as far as the name, I’m Harlem’s President, it¹s that simple.”

Be sure to check out Jay Pres For Prezident below.

Check out our Fly Artist Round-Up this week featuring up and coming artist that you should know about!

As the year comes to a close, it’s safe to say that Jay Pres had a productive year. The Harlem native has released three projects and 4 singles, alone, in 2016. He also performed at the legendary SOB’s 3 times – once for Hot 97‘s “Who’s Next” Showcase series. One of the projects Pres released was a surprised mixtape comprised of covers and remixes of popular records titled, “Sephora.” And it’s followup arrives just in time for the holidays.
And interestingly enough, it’s titled, “MAC.” This time around, we find Jay Pres covering classic Hip Hop records such as Wutang Clan’s, “C.R.E.A.M.” and Jay Z’s “Dead Presidents.” This tape truly showcases Jay Pres’ versatility as a rapper. It validates his skills while showing (and proving) that he is more than capable of delivering, no matter the beat. Whether you’re a Millennial fan, or a lover of the Golden Era, you can appreciate what Jay Pres has to offer as a Hip Hop artist.
About Jay Pres:
The young, rising talent from one of Manhattan’s notorious neighborhoods, has been consistent with his music; since transitioning into Hip Hop from playing college basketball. He’s a familiar name and face who has been associated with the likes of fellow Harlem native, Teyana Taylor, Dave East and Tray Pizzy (producer credits), and more. Jay Pres is undeniably on his way to leaving his own mark in Hip Hop. And like his uncle, Roy Ayers, is paving the way on his own musical journey.
Twitter: @JayPrezi

In a span of three years, emerging Atlanta artist, Supakali, has accomplished a lot, independently. He has released two projects, opened up for Rick Ross in Washington DC, performed in venues and festival stages across the US, and is always winning over new listeners, while expanding his fan base. Over the Summer, the Georgia native took on the Big Apple as he made a temporary move to focus on his music career.

During his stay, Supakali recorded new music, shot a music video, performed a couple shows, and linked up with Harlem’s own, Jay Pres – who has worked with artists such as Dave East and Tray Pizzy. Together, the two emcees are a dynamic duo in the studio and it’s evident on their first ever collaboration. With Kev Cairo on the beat, “1000” will have you cranking up your speakers and singing along to the hook.

Supakali’s The 5th Quarter drops soon and will serve as the precursor to his long-awaited Soon You’ll Understand album.

Harlem’s own, Jay Pres, follows up his recent Hot 97’s Making the Stage competition appearance at SOB’s – during their Who’s Next Live show – and Sephora mixtape (which featured remixed covers of popular songs), with a new single for Summer ‘16. The JDiablo produced cut plays host to both Jay and frequent collaborator, Qu’ality. The two deliver fun and clever rhymes over the infectious production.

“It’s definitely a tune you can Milly Rock, Harlem Shake or hit the Running Man to,” states Jay.

The young, rising talent from one of Manhattan’s notorious neighborhoods, has been consistent with his music; since transitioning into Hip Hop from playing college basketball. He’s a familiar name and face who has been associated with the likes of fellow Harlem native, Teyana Taylor, Dave East and Tray Pizzy (producer credits), and more. Jay Pres is undeniably on his way to leaving his own mark in Hip Hop. And like his uncle, Roy Ayers, is paving the way on his own musical journey.

After starting the year off with a new single, Harlem’s, Jay Pres, has been steady on his music grind. The rapper/producer/audio engineer – and former college b-ball player – who hails from Harlem, is a familiar name & face in the Manhattan neighborhood. Associated with the likes of Teyana Taylor, Dave East, Tray Pizzy, (having produced for both Dave & Tray) and more, Jay Pres has embarked on his own musical journey in Hip Hop.

Today, he dropped a surprise tape titled, Sephora. The tape, strictly comprised of covers, plays off the make-up brand’s name – people use make-up to cover up. “Get it?,” says Jay Pres. Putting his on twist on some of the hottest cuts out on the radio right now, ‘Sephora’ shows another side of Jay that spotlights his alter ego, “John the Don.”

The release follows Jay’s recent performance at SOB’s for Hot 97’s Who’s Next Live. He was interviewed on Blame Ebro’s website shortly after. Hot 97’s Scottie Beam also included Jay’s “Swaggy P” single on her #PutYouOnPlaylist a few weeks ago.

Also, check out the video for “Grammys” below:

To kickstart the new year, Jay Pres officially releases his self-produced single off his upcoming Life of a Don project.

As the nephew of legendary Jazz musician, Roy Ayers, and the son of professional singers, music was something Jay Pres couldn’t deny. His family’s musical background and his irrefutable love for music, especially Hip Hop, have always inspired the Harlem rapper to create his own art. As the new year begins, and his 28th birthday approaches, Jay Pres is ready to hone the legacy he was always destined to leave behind.

To prepare us for his upcoming project, Jay Pres liberates the first official single from ‘Life Of A Don.’ The self-produced record, “Dolemite” is a record that showcases both his production and rapping skills.

“The chords I used give off an oriental vibe over a Hip Hop beat that has a lot of bounce to it.”