Earlier this week rapper French Montana sat down with Larry King on the Emmy nominated series Larry King Now for an in-depth interview to discuss his upcoming album, his friend Kanye West’s latest antics, Kanye’s mental health and lyrics about Taylor Swift. Plus, French also discusses his relationship with Khloe Kardashian, if it’s still romantic(!), and the feud between Drake and Meek Mill.

French Montana responds to a claim that Kanye has mental health issues.

“Kanye West is a genius and all the moves he do is calculated. There’s a method to his madness.” He also gives his take on Taylor Swift’s objection to Kanye referring to her as a “bitch.” He explains while Kanye claims the term is used as a form of endearment in the music industry, it really depends on the situation. In Kanye’s case, “I think he means good,” French says.

The rapper addresses reports that he and Khloe Kardashian are dating again by saying the two are like “best friends” but when Larry asks if it was ever romantic French responds, “it could be at times,” with Larry following up asking if “it still could be (romantic)” French blushes and laughs, avoiding the question and says Lamar Odom is a nice guy.

He also weighs in on the feud between Drake and Meek Mill.

“With this situation it’s different, but at the end of the day, I don’t feel like they have real problems. It’s just part of the game. It brings excitement to the game.”

Plus, French opens up about what it’s like being a muslim in America today following Donald Trump’s call for a complete ban on all muslims entering the country and his take on why there are so few female rappers.

Check out a few clips below:

French Montana Gets Candid About Kanye Vs. Taylor Swift

French Montana responds to a claim that Kanye has mental health issues and he gives his take on Taylor Swift’s objection to Kanye referring to her as a “bitch.”

French Montana: Khloe Is My “Best Friend”, But…

The rapper responds to reports that he and Khloe Kardashian are dating again by saying the two are like “best friends” but when Larry asks if their relationship could still be romantic, French avoids an answer. 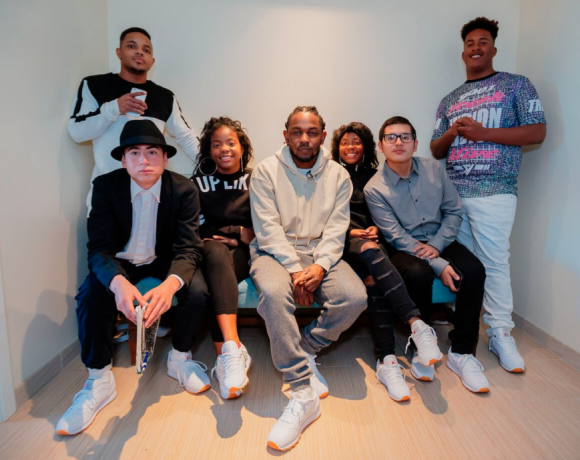 Last night, Reebok Classic and Kendrick Lamar continued their mission to inspire and encourage youth by taking students from his former Compton High School to the biggest Music Awards of the Year.

Honoring Kendrick’s past while celebrating his future, Reebok Classic give students from Compton the opportunity of a lifetime, to be part of his incredible awards experience. Central to what Kendrick stands for is his connection to his fans and his message of inspiration, a message that is shared by Reebok Classic.

Students were invited to spend time with Kendrick, allowing them to share in a personal and highly significant day, ahead of attending the ceremony to watch their idol perform and accept multiple awards. During their time with Kendrick they were given the opportunity to have a Q&A session, during which they learned that he is just as inspired by them as they are by him.

The students captured their journey from Compton to the ceremony, including their candid moments with Kendrick, through a series of imagery and video content.

Kendrick Lamar was nominated for an amazing 11 Awards at last night’s ceremony. An accomplishment that most artists haven’t even come close to touching, Kendrick is a true inspiration with a story to tell. His passion, integrity and authenticity have brought him to where he is today.

Kendrick, stunned audiences worldwide with a legendary performance of “The Blacker Berry” and “Alright,” during which Lamar hit the stage with his crew in white Reebok Classics.

To celebrate Kendrick’s ground breaking achievement and pay tribute to his Compton roots, Reebok Classic treated students from his former high school, Centennial High School, to a once in a lifetime experience which honors Kendrick’s past while celebrating his future. Each lucky student exemplifies the attributes that shone in a young Kendrick and embodies the characteristics that Reebok Classic encourage; having the courage to express who they are and a willingness to stand out from the crowd.

The students spent time with Kendrick as he prepared for the ceremony ahead of being given a full red carpet experience, attending the GRAMMY Awards ceremony to watch their idol perform and pick up his multiple awards.

Just after her captivating performance at the annual 57th Grammy Awards, Beyonce takes us behind the scenes and gives us a closer look at the process of her major rehearsals.

Watch: Ledisi Speaks About The Beyonce ‘Selma’ Controversy And Why She Didn’t Perform with John Legend & Common

In the video, Bey vividly speaks on the reasoning of why she wanted to perform the Thomas Dorsey gospel classic, “Take My Hand, Precious Lord,” and how she handpicked each individual male (singers), whose experienced the same type of heartache, pain, lived in struggle, and who has a close relationship with God. But in the end, wanted to display African-American males in a positive light.

Peep the full clip below: 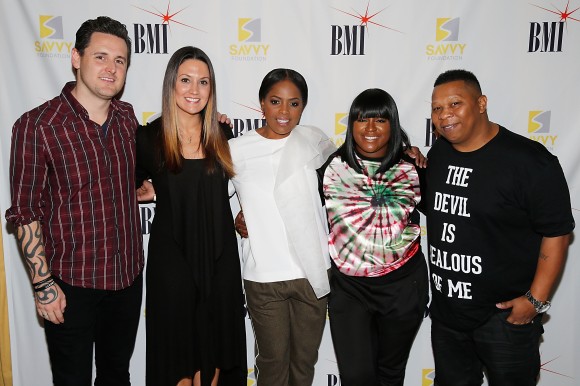 Broadcast Music, Inc.® (BMI®), a global leader in music rights management, held its annual pre-GRAMMY event, “How I Wrote That Song,” on February 7th at 1Oak in West Hollywood. 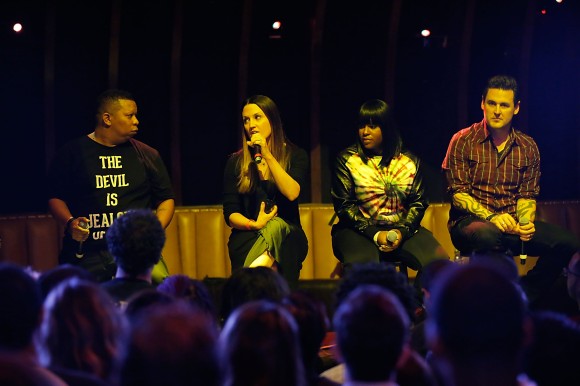 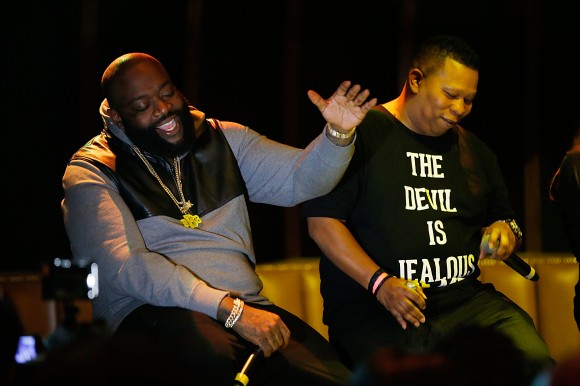 Moderated by BMI Vice President, Writer/Publisher Relations, Atlanta, Catherine Brewton, panelists shared their secrets to success in the process of writing, producing and performing hit songs. Each panelist also revealed the personal stories behind their greatest and most memorable hits.

A special shout-out goes to Ester Dean! We absolutely love her here at SFPL! If you’re not familiar with how many hit songs this chick has written and produced, just Google her. You will be quite shocked! She’s a beast with the pen!
#GoodTimes
Check out the full gallery below:

The uproar still continues as the public wants to know why Ledisi did not perform alongside Common and John Legend during their performance for this year’s Grammy’s ceremony, representing the iconic movie, SELMA. Instead, 20-time Grammy Award winner Beyonce belted out the lyrics of the spiritual, “Precious Lord, Take My Hand,” that Ledisi originally performed in the actual movie portraying gospel legend, Mahalia Jackson in the Martin Luther King, Jr. biopic.

When asked by reporter, ET’s Kevin Frazier as to “why she’s not singing the song?,” Ledisi says:

I don’t have a clue — but I will say, what I’m excited about is that I had the pleasure of playing an iconic figure in ‘Selma,’ and the song, “Precious Lord, Take My Hand,” it’s been going on forever – starting with the queen Mahalia Jackson, the queen of soul Aretha Franklin, then I was able to portray and sing my version of the song; and now we have Beyonce — I mean, her generation will now know this song — so now i’m apart of history. I look at it like that, instead of looking at it as a negative. To me, it’s a great, GREAT honor to be apart of a legacy of a great song by Thomas Dorsey.

When Kevin asked John Legend about the topic at hand, he says:

We were actually approached by Beyonce. She wanted to do an intro to our performance and introduce us,” Legend told Kevin. You don’t really say no to Beyonce if she asks to perform with you.

And this is why we LOVE Ledisi here at SFPL and fully support her! That was the most intelligent and mature answer that we have ever heard from any celebrity.

Great statement Ledisi! And you will hit that Grammy stage! 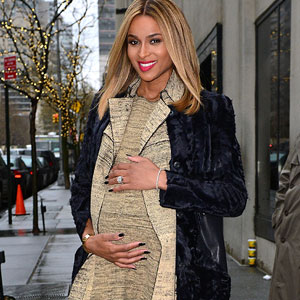 I’m sure you’ve heard by now that singer, Ciara is pregnant (We KNEW that tho) by her fiance, rapper/producer, Future.

END_OF_DOCUMENT_TOKEN_TO_BE_REPLACED

Just premiered exclusively on E!, Rihanna delivers her newest visual for the chart-topping track “Stay” featuring Mikky Ekko. Rihanna sits within a tub of water, filled to the brim and reminisces on a love that she can’t let go, but through all of the ups and downs…she wants them to…stay. Check it out below..

END_OF_DOCUMENT_TOKEN_TO_BE_REPLACED

I knew foolishness was on hand when Nicki Minaj showed up with the Pope’s stunt double.

I said to myself where is THIS going?

After visiting her Grandmother’s house Nicki decided to bless us with one of the most bizarre performances EVER.

Well Grab ya Bibles, Guard your grill and knuckle up because this one is for the demons in you!

Ummmmm, what does one do with that?

I’d have rather her performed Stupid Hoe and that’s not saying much.

She definitely lost me last night, her team thought THAT was a good Grammy performance?

Somebody needs to be checked for that one….

Many people though it was reminiscent to Lady Gaga’s 2009 VMA performance. Well, it was the same choreographer and creative director, Laurie Ann Gibson.

We Hated it, Your Thoughts?

Fly Girl,  Adele took over the entire GRAMMY Awards last night by sweeping all 6 of her categories, including Album and Song of the year.

Although the night was somber with thoughts of our recently fallen Queen, Whitney Houston. The night gave away to triumph as a new Queen was born in the form of British Songstress, Adele.

The night was supposed to be Adele’s night, as the pop star was expected to take every category as she did!.

Adele completed her triumph over a broken heart and her vocal chords with a six Grammy sweep!

According to our Sister Necole Bitchie R&B Star Fantasia Barrino Boycotted the Grammy’s this year because she was upset that she was not apart of the Tribute to her idol Aretha Franklin.

When word got back to Aretha, this is what she had to say;

“I was sorry to hear that Fantasia was upset because she did not get the opportunity to participate in my GRAMMY Tribute this year.  I recall that in the past, Fantasia participated in both my MusicCares Person of the Year Tribute and my United Negro College Fund Tribute.  Fantasia is still young in the business and although we all love and appreciate her she must understand that in this business of show business she will not always get to participate in everything she would like to participate in.  I’m sure it was not an intentional omission.  I will see Fantasia over the summer here in Detroit.”

Now look, we were looking for her too, it’s seems like common sense to have Fannie perform an Aretha tune, To us any way. However, The Grammy’s didn’t feel that way.

Somebody on that Grammy board probably said; “Heavens NO as soon as she comes on stage she’ll …

And we’ll have none of that!’.

The Truth of the matter is, Fantasia needs to understand that its at the discretion of any Board to grant her an invitation to run around an auditorium shoe-less belting her heart out! Some folks love it, and others just ain’t with it.

Fantasia won her very first Grammy that night, but because she was having a moment she wasn’t on hand to accept the coveted trophy. That’s really to bad, but Congrats any way!