The world is excited because the highly anticipated DC team-up film Justice League is literally days away. In honor of the film’s impending release, Warner Brothers rounded up YouTube’s biggest stars to sing Justice League’s theme song “Come Together” featuring the amazing Gary Clark Jr who sings the actual song for the film.

Warner Brothers reached out to YouTube sensations Todrick Hall as Cyborg, J.Fla as Wonder Woman, Clara Marz as Aquaman, Samantha Harvey as The Flash and Mario Bautista as Batman.  They each represent different countries around the world preaching the much-needed message of togetherness.

Justice League hits theaters November 17th, peep both videos for “Come Together” above.

Musician, Singer, Songwriter Gary Clark Jr. has graced a number of stages and impressed many by his musicality that combines the influence of soul, jazz, blues, country, hip hop and more. Now, the talented artist links with one of the most reputable brands in the car industry to deliver the profoundness of luxury, paired with Gary’s admirable talent, style, and the exclusivity of sound to present Cord. In that very moment when you’re plugged in and the stage was as big as you had always imagined. It’s a dream that becomes reality. Now…#ThatsContinental!

The Lincoln Motor Company teamed up with Gary to debut an exclusive amplifier, engineered by Revel. The engineers of the brand honed the state-of-the-art technology, while design values of the 2017 Lincoln Continental are visible throughout, from the instantly recognizable grille, the wood grain and the leather to the back-lit LED Lincoln logo.

Clark Jr. will be featured in ‘Cord,’ a 60-second commercial spot during the biggest night in music this Sunday highlighting both the amplifier and the Lincoln Continental.

Built by brothers Ben Fargen and Jeff Earl, who have been handcrafting guitar amplifiers since 1998, the one-of-a-kind amplifier is designed to reflect the craftsmanship, quality, and performance of the Lincoln Continental and the superior sound of Revel.

“In seeing the new Continental and seeing what Revel has done with their speakers, it was easy for me to say, ‘OK, we’re going to match that intensity, that quality and integrity,’” Ben Fargen says. “For us craftsmen, it’s also always about reaching a new level, about setting the bar higher than the competition, reaching deep into the framework of what Lincoln and Revel have already done and saying, ‘Where can we take it next?’”

“Revel and Lincoln were looking for something that would celebrate sound, power,    rock n’ roll, all of the raw things that people love about music,” Fargen says. “I want the performance and the intensity of the Lincoln Continental to show through the first time the artist plugs into the amp.”

A new rendition of Gary Clark Jr.’s “The Healing” and “As The Train Pulls In” will be available for the first 10,000 visitors for free download via Lincoln Now.

For now, get a special peek of the commercial above!

Over the weekend, the Afropunk Festival took place right in the middle of Brooklyn, New York and thousands came out to enjoy the festivities! Hit the next few pages to what artists graced the stage right in BK with official sponsors on-board. 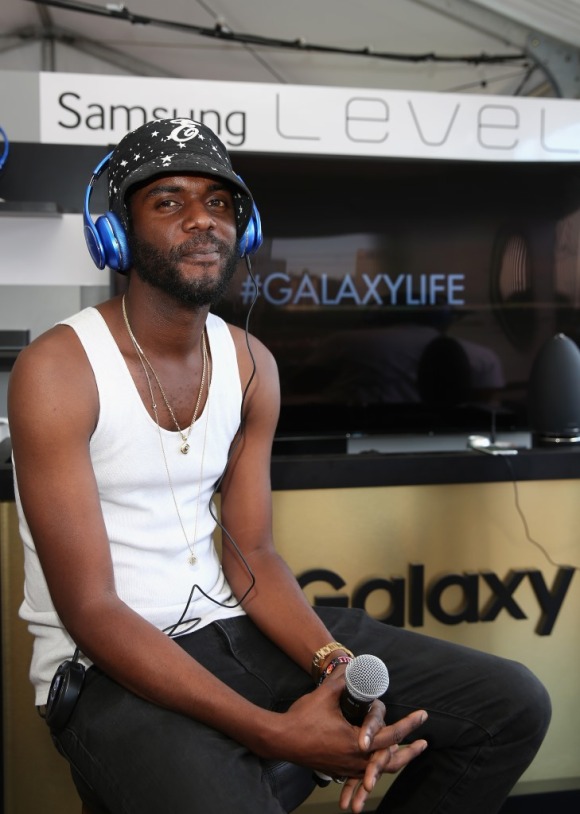 Samsung continued its efforts in rewarding loyal Samsung Galaxy owners with festival perks and upgraded access to the Samsung Galaxy Owner’s Lounge. Select Samsung Galaxy owners were also invited to a private listening party with Gary Clark Jr. using the Samsung Level On headphones. Guests got a sneak peak of four new tracks off the Austin native’s second major label LP The Story of Sonny Boy Slim – out September 11th, worldwide. When asked about his inspiration for the new LP, Gary without hesitation spoke to the birth of his son, Zion.

For the first time ever, visitors of both the Samsung Galaxy Experience and Samsung Owner’s Lounge were able to view performances from the Samsung Galaxy main stage in virtual reality, a first at the festival, powered by Samsung Gear VR.  Viewers of the fully-immersive Samsung Gear VR experience were transported to the main stage for an unforgettable, up-close-and-personal performance from artists like Glass Animals, Alabama Shakes and Cold War Kids.

PHOTOS PROVIDED BY: SAMSUNG FOR GETTY

Beyoncé stepped in the room with class and so much control, as she kicked off the Stevie Wonder: Songs In The Key Of Life – An All-Star GRAMMY Salute event at Nokia Theatre L.A. Live on February 10th.

The Queen Bey hit the stage along with artists; Ed Sheeran and Gary Clark Jr. to perform at the tribute, as it was completely amazing! Bey also took the stage once again, along with hubby Jay Z at the end of the concert for one last group performance led by Stevie Wonder himself.

Peep the clip below:

END_OF_DOCUMENT_TOKEN_TO_BE_REPLACED

Gary Clark JR. sings about the downside of love in his new visual for “Numb” off his debut album Blak and Blu. It’s easy to see why he is drawing comparisons to the late great Jimi Hendrix with his guitar skills and voice. Gary Clark Jr. also played for President Barack Obama at the white house, opened up for The Rolling Stones, impressed music’s royal couple Beyonce and Jay-Z at the Made in America music festival and played with Alicia Keys and Maxwell for their “Fire We Make” duet. He has also performed with the legendary roots band and you can catch him at their 6th Annual Roots Picnic June 1st. Step into Gary Clark Jr’s visual for “Numb” below.