The promo tour is in full swing for our coverboy Mack Wilds. If you didn’t know Mack has a dope album out  well I’m sure you do now. Fresh off the release of his debut album New York A Love Story and his single “Own It” getting major play, Mack stops by The Breakfast Club to chop it up with the popular morning show. In The interview Mack talks about growing up in Staten Island, comparisons to Drake, why he got in the music industry, being a sex symbol, acting career and more. Watch the full interview below and be sure to checkout his full cover story and spread if you haven’t done so already.

With the promo for 2 Chainz sophomore effort ‘B.O.A.T. II (Me Time)’ well underway, 2 Chainz sat down with DJ Skee on his live television show Skee Live. The Atlanta rapper has been in the news alot lately and it hasn’t been because of his music. 2 Chainz touched on his recent stint with law in Oklahoma City saying:

You just keep it moving. I come from an urban, challenged background. “I come from an apartment set and a bunch of guys raised by single mothers. And I made it in a lot of people’s eyes. Once people, or the law, whoever figures that we’re roughly on the same team, because I’m out here, basically just tryin’ to feed my family. You know, paying taxes and none of us are perfect. Let me be the first to say that.

2 Chainz also talked about wanting to be a role model:

But, just for me, I’m just trying to be some kind of example, some type of inspiration for someone that’s behind someone that’s coming up to know, ‘You kinda got rights. You storta have rights.’

Amidst  all of the seriousness 2 Chainz also talked about possibly playing in the NBA saying he’s considering going after a 10 day contract. That is something I would like to seem we can’t forget Master P’s attempt at making a run at the NBA. Peep the interview below and catch Skee Live on AXS TV every Tuesday live 10PM ESt, 7PM PST. 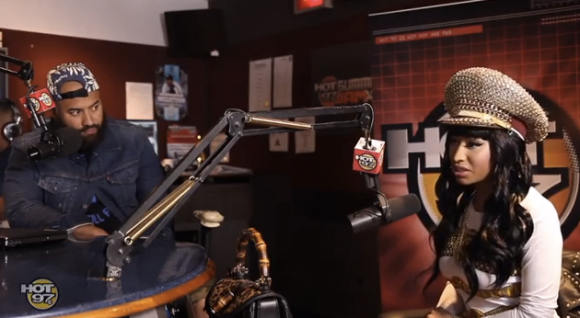 Remember when Nicki Minaj and Peter Rosenberg had beef? Yeah me neither . With arguably the largest hip-hop concert in the tri-sate area around the corner Nicki and Rosenberg decided to call a truce. Oh I see what y’all doing over there Hot 97 y’all ain’t slick. Why not get in captain of the “starship” (pun intended) good graces, it makes perfect sense to me. She owes the city a dope performance anyway period. In the interview Nicki discusses why she was mad at the Hot 97 morning show radio personality, she also revealed that she felt she should have hit the stage anyway. Many people including myself felt she should have taken the stage regardless to upstage Rosenberg’s antics. Nicki also revealed she wasn’t even going to perform her pop hit record “Starships” at last years Summer Jam.

The timing of this truce is perfect and both parties are smart on both parts for getting these two together to put to bed the “beef”. NYC wants to see Ms.Minaj in rare hip-hop form it’s long overdue. Peep the whole interview below.

Who knows we might get another Nicki Minaj twerk session on stage at Summer Jam.

Coming to the Summer Jam this year? We shall see.

With his recently released album Hotel California expected to sell between 45k to 50k the “Rack City” rapper stopped by The Breakfast Club and chopped it up. The YMCMB rapper touched on the recent controversy with Rick Ross and his controversial rap lyrics which led to him being dropped by Reebok. Tyga is also an ambassador for the sneaker brand so he acknowledges you have to be careful in what you say but also agrees that these companies should be conscious that they are dealing with rappers.They also talk about some of his failures such as his snafus with the Lambo, that dreadful “Hit Em Up” track with 2Pac and his hilarious appearance on the failed MTV show “Bustas“. You know he couldn’t escape that studio without talking about his baby momma Blac Chyna and what goes on in the bedroom. He also revealed he doesn’t get any checks from YMCMB hmmmmm… Check out the entertaining interview below.

END_OF_DOCUMENT_TOKEN_TO_BE_REPLACED

We are just hours away from the return of Love and Hip-Hop NYC and the anticipation is very high. The shows star Joe Budden stopped by Cipha Sounds and Peter Rosenberg Morning show. He talked about recent comments made by fellow cast-mate Raqi Thunda who claim that Joey was her “Gay Best Friend” and said that a recently leaked nude photo was indeed Joe. Joe pretty much shot down anything she said ,but he did admit that it was him in the photo but it was “doctored” and he could prove it was. Joe also got personal and talked about his use specifically his use of the now popular drug “Molly”. He is now drug free though so good for him. He also touched on his old flame and cast-mate Tahiry as well as his current love interest Kailyn Garcia who makes appearances on the show.  Checkout the interview below.

END_OF_DOCUMENT_TOKEN_TO_BE_REPLACED

Ne-Yo stops by the Breakfast Club again not to start beef with other R&B singers this time around, but to promote his amazing album “R.E.D.”. Of course when you do a Breakfast Club interview your album is not the only thing they are going to talk about. Other topics touched on Ne-Yo’s shady “baby mama”, doing pop music, how he chooses whom he works with and more.