After a two-year break from solo releases, the UK’s indisputable Superman of R&B — Jermaine Riley returns with the catchy, 808-rich banger “Family”. The track samples Jay Z’s “Family Feud” and was produced by Birmingham’s own Gifted, who also has a couple cuts on Riley’s forthcoming sophomore album, following 2012’s critically acclaimed Hello Earth. Candidly touching upon the subject of marriage and building a family with the one he loves, Riley flows over the beat with his renowned approach, complete with quick vocals riffs, lush harmonies and a rap-like delivery in the verses. Unbeknownst to him, however, upon recording the song, he had no idea he was writing an anthem for those who want to take their relationships to that next level. 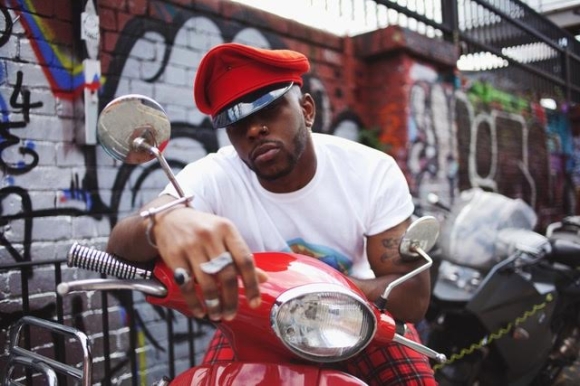 “All the girls I played it to were like ‘Awww… oh my gosh, that’s so cute!’ — which I didn’t expect, to be honest. As songwriters, trying to please everyone and keep our audience engaged, sometimes we dive into the creative process with the intentions of ‘I know this will get them on my side’, and I didn’t do that at all with this song. I just wanted to flip the “Family Feud” thing and just have a song everyone could sing and dance along to. But the feedback has let me know that the topic is way more relatable than I thought. I just wrote the first thing that came to me.”

Riley continues to live up to his superhero namesake by writing, arranging, engineering and designing the artwork for all his songs, and “Family” is no exception. The somewhat adorable cover art incorporates the digitally illustrated head of the first-born child of Jay-Z and Beyoncé: Blue Ivy Carter, a clear symbolic reference to the start of the celebrity couple’s family. Fans of the former 1/3 of Fun*dmental will be pleased to know that he has every intention of giving them more of what they’re used to when it comes to the visuals for this song and those on his new solo album, slated for 2018.

“I want to challenge myself, push for excellence and give my fans something they’re definitely not going to find from another UK artist. There’s no one here giving kids what MJ and Usher gave to me. That showmanship. I’m always going to try and pass that down and be that all-round entertainer.”

If “Family” is anything to go by, Riley’s new album will be filled with well-written, memorable numbers that showcase a more human side to the ever-creative R&B Superman. What’s safe to say is: Jermaine Riley is back!

If you’re not going home for the holidays then you might just change your mind after watching Trey Songz‘s new visual “Comin Home.”

In the video, Trey spends precious time with his family, friends and more in Virginia as he hits the streets and visits his old neighborhood. Throughout the video, you will also see a few candid moments of Trey’s immediate family and even his Grandmother as they speak on spending holidays with the ones that they love dearly. The talented singer also reflects on a certain love interest according to the lyrics of the song.

In the song he sings:

I wish I was there more than I am, babe
These lonely nights take a toll on a man
You don’t understand it
It’s so unfair that Christmas is all throughout the air
And I hate that we’re both alone
I’d rather be with you by the mistletoe

Check out the video above.

With a perfect Summer track to end off the Summer, Songstress Bridget Kelly releases the visual for her infectious new track featuring Mack Wilds, Act Like That.

The singer, whose Summer of 17 EP was released earlier this month, brings her boys and girls to the back yard for some Summer fun.

“I knew I wanted to shoot a video that looked and felt like summer in New York City,” she said. “Guys chillin’ on the stoop, girls being flirty and everybody dancing and having a good time.”

The summer visual takes place in Brooklyn, NY where we find Bridget Kelly, Mack Wilds, and a few of their friends throwing a block party and grilling on the BBQ while sipping Solo Cups, dancing, laughing, flirting and having fun. The Music video was directed by J Williams who is the niece of legendary film director, film producer, screenwriter, and music video director Hype Williams.

Be sure to snag a copy of Summer of 17 on iTunes! If you’re hooked, listen to more of Kelly on her SoundCloud page.

They’re back!!! Toni, Traci, Towanda, Trina, Tamar and Ms. E are blessing our televisions screens for another season of ‘Braxton Family Values.’ In celebration of this moment, we will highlight some of your favorite moments from previous episodes of BFV.

Check them out below….

After all of the gifts were exchanged and presents were opened, Chris Brown set Instagram on fire with the #ChristmasChallenge, with folks doing the chicken head, shmoney dance and a bunch of other dances to ‘Right Thurr’ by Chingy. Check it out after the jump…

Team SFPL had a chance to get a first look at Deion Sanders aka Primetime‘s reality show, Deion’s Family Playbook, as it returns for it’s 2nd season. We also got to speak with Deion on a few topics like; family, coaching, pro and college football, African-American males on reality tv and more.
END_OF_DOCUMENT_TOKEN_TO_BE_REPLACED