Jenny from the block may be bidding farewell to her chair as a judge on American Idol, but she’s back with new music. Her latest single “Ain’t Your Mama” is sure to become this summer’s feminist anthem.

In the track, J. Lo puts a man-child in his place letting him know that contrary to what he believes she isn’t his mama so he shouldn’t be expecting her to do any cooking or to take care of his delicates. Of course, the songs production features latin influences and is sure to have all the ladies shaking their hips in the club.

“Ain’t Your Mama” was produced by Dr. Luke (which really makes us want to hate it) and written by Meghan Trainor and Jacob Kashner.

You can listen to the brand new song below. Lopez will debut “Ain’t Your Mama” tonight on the series finale of American Idol. 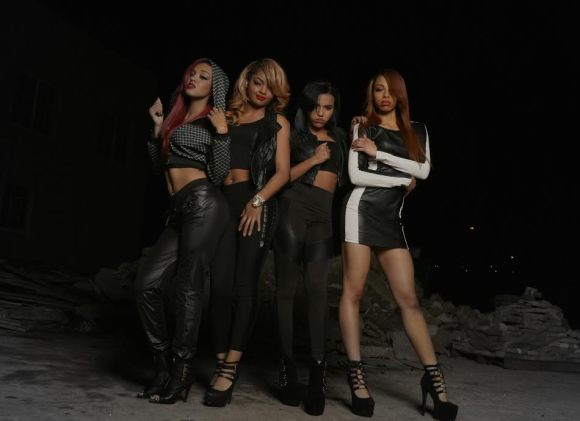 Emerging R&B/Pop group Epic has just released their first visual to their new ​single “Hold On,” a new-aged rendition of En Vogue‘s classic ’90s hit.
​
T​he California-native quartet comprised of Monie, Yei, Stixx and Blue introduce a strong vocal performance with a relatable sound to an old school classic.
Produced by Kevin “She’kspere” Briggs, best known for his work with Whitney Houston, Pink, Destiny’s Child and TLC, who manages the group along with Dynasty Records‘ president Doe Henderson, featuring Kentucky artist B Simms.
​Epic starts with a vocal delivery of the nation’s favorite a cappella verse and transitions into a united front of girl power mixed with various colors, dance moves, fancy cars and defining hair colors and wardrobe enchanting viewers everywhere. ​
Peep the video in full below:
Thoughts?
About Epic:

“No one wants to follow someone boring. We’re not afraid to take on a challenge. If it’s something we love to do, we go for it – but we go above and beyond, it’s go hard or go home!”…

They are the ‘alpha’ of all today’s girl bands. Performing together since they were toddlers with a background of church choir, theatrical film, acting, ballet, musical training and modeling, this R&B/Pop girl group has a lot to offer the industry with versatile vocal abilities as well as stunning beauty.

EPIC is a breath of fresh air to those missing originality in entertainment! Not only does each each girl sing, they are all musicians. You have Monie on piano, Yei on lead guitar, Stixx on the drums and keys, and Blue on the bass.

In 2014, EPIC joined forces with an elite team that’s preparing them for world domination. In the current age of Youtube and Vine singing sensations, Epic was actually discovered singing acapella in Atlanta’s Lenox Mall by Co-CEO of Dynasty Records, Doe Henderson:

“The girls walked passed me and when I saw them and they didn’t look like some regular girls just walking in the mall, I actually said to myself they must sing. So about 10 minutes later, I heard them downstairs singing and they had the whole mall’s attention…I went and introduced myself and gave them my card, and the rest is history.”

Doe wanted to help define their sound and knew just who to bring them to – Grammy award winning, multiplatinum producer Kevin “She’kspere” Briggs who has produced for two of the biggest girl groups of all time: TLC (“No Scrubs”) and Destiny’s Child (“Bugaboo”, “Bills, Bills Bills”) — along with Nsync, Usher, Pink and Mariah Carey, to name a few. Under his development along with multiplatinum songwriter & media consultant Tami LaTrell (Whitney Houston, Keyshia Cole), what these vibrant young ladies possess has only been enhanced and polished to perfection.

EPIC are not just girls with a pretty face, they are a rare breed bound for inevitable success, leaving a legacy for decades to come.

They are Edgy. People. Impacting. Culture…but you can call them EPIC.

For your listening pleasure, YMCMB‘s RnB songstress Shanell and CMG/Epic heavyweight Yo Gotti team up for the remix of Shanell’s sexy car-inspired track “Catch Me at the Light.” The song will appear on the forthcoming ‘Young Money: Rise of an Empire’ compilation. Check it out below…

END_OF_DOCUMENT_TOKEN_TO_BE_REPLACED

‪The much anticipated song “Rise Up” appears in full circle from King Bey‘s vocal cords, which is apart of the Disney movie EPIC. Setting the standard of great soundtrack anthems, this is definitely a first class hit. Peep the HQ version below… ‬