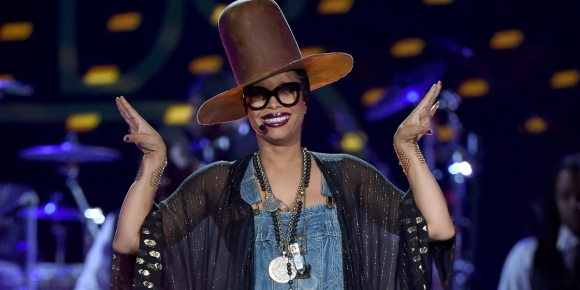 SOUL TRAIN AWARDS 2016 celebrated the best in Soul, R&B and Hip-Hop by highlighting both returning legends and breakout stars with unrivaled musical moments and titillating performances. The awards show, which aired tonight on CENTRIC and BET, was hosted once again by the funkadelic Godmother of neo-soul, Erykah Badu, who also served as Executive Producer.

The evening marked the inaugural Soul Train Awards since BET Networks officially acquired Soul Train earlier this year and it did not disappoint. The night featured crowd-loving classics and current favorites from the best Soul artists of yesterday and today.

Dru Hill kicked off the Soul Train Awards 2016 with the ultimate throwback of their 90s R&B jams including “Tell Me,” “In My Bed,” and “Beauty.”

An endearing and  inspired Jill Scott presented Brandy with the second annual Lady of Soul Award, who went on to blow the crowd away with a full dance and stunning vocal performance of her most beloved hits including “Almost Doesn’t Count,” “What About Us,” “Full Moon,” “I Wanna Be Down,” “The Boy Is Mine,” “Talk About Our Love,” “Have You Ever,” and “Sitting On Top Of The World,” joined by MA$E.

The awards ended on a high note with Teddy Riley pulling out all the stops for an unforgettable showcase following his receiving of the night’s highest honor, the Legend Award. Riley brought out retro hitmakers and past collaborators including Doug E. Fresh, Bobby Brown, Tito Jackson, Wreckx-N-Effect and Guy for a medley of classics including “My Prerogative,” “Remember the Time,” “Rump Shaker,” and more.

Alongside the amazing performances, the second annual Soul Cypher, featuring Erykah Badu, Tyrese, Ne-Yo, Angie Stone and the incomparable Gladys Knight was another musical moment not to be forgotten.

Video of the Year – Beyoncé – “Formation”

Album/Mixtape of the Year – Beyoncé – “Lemonade”

Song of the Year – Beyoncé

Here at Stuff Fly People Like we’ve had the pleasure of chatting with some of your favorite musical artists, but this time we chose to go a behind-the-scenes route with producer J. Rob. Having worked with artists such as Chrisette Michele, Dru Hill, Musiq Soulchild, just to name a few – J. Rob has produced and engineered some artists we absolutely love. Aside from having an amazing ear for good music, one of his secret weapons as a producer is his background in classical training that sets him apart from others.

END_OF_DOCUMENT_TOKEN_TO_BE_REPLACED

Not a bad song but this sounds like it came from Chris’ archives. Sounds like an old demo…no?

MORE MUSIC AFTER THE JUMP….

END_OF_DOCUMENT_TOKEN_TO_BE_REPLACED

The auto-tune is making my head spin. The track is not bad though….

More after the jump….