With President Obama approaching his last year running in office, the buzz around our next winning candidate has rapidly risen. As expected of course, but if you’re on the good wishing side of Mr.Barack there’s no way you’d be at all a fan of  Donald Trump in the least!

Now, our president has truly been among the coolest and most definitely the flyest the White House has ever seen! With that, we have to wonder, after presidency what would he be up to next?

President Obama has gained a lot of popularity in the entertainment spiel of things but hilariously this guy we’re about to show you gives us a taste of what things would be like if Obama flipped the script and became an MC. Check out the funny video below: 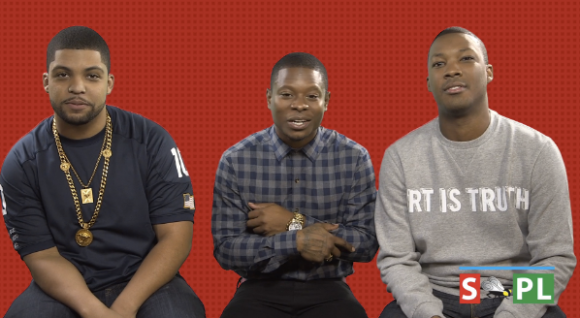 O’Shea Jackson Jr. (Ice Cube), Jason Mitchell (Eazy-E) and Corey Hawkins (Dr. Dre) have all encompassed their roles to the point where it’s quite scary how well they play each of their characters in the upcoming movie biopic, which hit theaters on Friday, August 14th.

During the interview, the fellas spoke on the pressures behind playing someone that they’ve idolized for so long.

[O’Shea] on playing the role of his very own Father, Ice Cube:

It had to audition for two years before I got the role. And then, after that I had a chemistry test with [these two: Jason & Corey] and like two other [Cube’s] and like three [Dre’s], and Universal Studios still had to pick the right man for the job. It’s a crazy amount of pressure because it’s my family’s legacy.

O’Shea admits that he may follow in his Father’s footsteps and pursue more music (says he gave Big Sean a nudge recently on the subject, as he laughs). But, for now acting is his main priority, he says.

[Corey] on why he thinks they were casted:

They took the fear away from us by letting us know…”you guys are right for the job. we pitched you guys for a reason. All the impersonations and all of the problems that you think you guys are going to have physically, we’re going to give you the tools to feel comfortable, but in the meantime, just to be here to support you guys.”

On the Drake vs Meek Mill:

It looks like there’s about six rounds left in the fight, so let’s not count it out completely. But we all know what the judges cards are looking like at this point. It’s been a knockdown in the fight! He got up but lets just see where it goes.

Check out the entire interview below:

ON THE GRAM: THE INTERNET TAKES THE STRAIGHT OUTTA COMPTON PHOTO GENERATOR AND RUNS AMOK WITH IT

Meek Mill isn’t backing down yet!

Yesterday the Philly rapper finally responded to Drake after he viciously slandered Meek during his OVOfest concert and we kinda wished he didn’t even say anything. Hit the jump to see what he said to Drake.

END_OF_DOCUMENT_TOKEN_TO_BE_REPLACED

Incredible night for the city! 6th Annual in the books. Thank you.

It’s not even looking like a fair fight anymore. Last night Drake closed out his 6th annual OVO Music Festival by taking a page out of Jay Z’s book and embarrassing Meek Mill by throwing him up on the OVO screen. Hit the jump to see the furious dragging of Meek Mill.

END_OF_DOCUMENT_TOKEN_TO_BE_REPLACED

FINALLY! Meek Mill responds to Drake annnnnndddd the internet is not feeling it like he probably thought they would. Hit the jump to see the fall out.

END_OF_DOCUMENT_TOKEN_TO_BE_REPLACED

The 6 God, Drake is not playing with Meek Mill and in the wee hours of the morning released a second diss rack aimed towards the Philly rapper. You know the internet didn’t exhibit chill one bit, peep the fallout after the jump.

END_OF_DOCUMENT_TOKEN_TO_BE_REPLACED

If You’re Reading This Meek It’s Really Too Late Now!

Drake doesn’t wait for Meek Mill to respond and let’s go another diss track aimed towards the Philly MC titled “Back To Back”.

END_OF_DOCUMENT_TOKEN_TO_BE_REPLACED

Meek if you’re reading this then you then it’s probably too late!

Drake pretty much broke the internet today when he finally responded on to Meek Mill’s recently allegations of him not penning his rhymes. Drake waited patiently to address the Philly rapper on his OVOSounds Radio show on Beats Radio. The internet immediately went nuts, hit the jump for the track and reactions.

END_OF_DOCUMENT_TOKEN_TO_BE_REPLACED

The world has been glued to Drake’s social media accounts in anticipation waiting for some sort of reply to Meek Mill and his accusations. We finally got one… well sort of hit the jump to see what 6 God had to say on the matter.