Skip to the content
From Marvin Gaye to Sam Cooke to Bob Dylan and beyond, Civil Rights struggles have a rich history of connection to music. So it is, in the spirit of that tradition, J.PERIOD and Jesse Williams join forces with artists from The Playlist Retreat to create a new wave of music for a new movement with the release of RISE UP! Music Inspired by the EPIX Original Series America Divided. The first single from “Miranda (RISE UP!)” features an introduction from actor/activist Jesse Williams, with rappers Rhymefest & Xzibit posing provocative questions about the state of our nation over a J.PERIOD-produced beat. “We’re pointing fingers at each other and we’re missing the point…” Rhymefest begins. Unity, not division, is the solution for what ails our country—a fitting message in honor of what would have been Dr. Martin Luther King Jr.’s 88th birthday earlier this week.
Executive produced by Norman Lear, Shonda Rhimes, and Common, the EPIX Original docu-series America Divided features celebrity hosts including Jessie Williams (Senior Producer), America Ferreira, Rosario Dawson, Amy Poehler, and Zack Galifianakis investigating a wide range of social justice issues including criminal justice, immigration, housing and voting rights, and education. The series also forges the foundation of Jesse’s partnership with J.PERIOD, who composed the original theme song for the show.
RISE UP! pairs hip-hop icons including Black Thought, Pharoahe Monch, Posdnous (De La Soul), Young Guru, and DJ Jazzy Jeff; leading artist/activists including Aloe Blacc and Joss Stone; soulful voices including Raheem DeVaughn and Eric Roberson; and rising music stars from The Playlist Retreat including Mayda del Valle, Maimouna Youssef, Masego, Dayne Jordan, Stro Elliot, Tall Black Guy, POMO, and more.
“In the process of progress,” states Jesse Williams, “We are reclaiming our best practices, heroes, and nomenclature. I am a proud producer of the America Divided docu-series and honored to work alongside producer and mixtape master, J.PERIOD, in creating a soul-sonic experience that is both homage and inspiration to the critical thinking that undergirds liberation movements of past, present, and future.”
J.PERIOD’s most recent production, The Hamilton Mixtape, debuted at #1 on the Billboard Top 200 Albums in December 2016.
For more information about RISE UP! Music Inspired by the EPIX America Divided, follow J.PERIOD on Twitter @jperiodBK or visit http://JPERIOD.com for release details about this powerful collection of new music.
For more information about the original docu-series America Divided, executive produced by Norman Lear, Shonda Rhimes, and Common, visit: http://americadividedseries.com.

The uproar still continues as the public wants to know why Ledisi did not perform alongside Common and John Legend during their performance for this year’s Grammy’s ceremony, representing the iconic movie, SELMA. Instead, 20-time Grammy Award winner Beyonce belted out the lyrics of the spiritual, “Precious Lord, Take My Hand,” that Ledisi originally performed in the actual movie portraying gospel legend, Mahalia Jackson in the Martin Luther King, Jr. biopic.

When asked by reporter, ET’s Kevin Frazier as to “why she’s not singing the song?,” Ledisi says:

I don’t have a clue — but I will say, what I’m excited about is that I had the pleasure of playing an iconic figure in ‘Selma,’ and the song, “Precious Lord, Take My Hand,” it’s been going on forever – starting with the queen Mahalia Jackson, the queen of soul Aretha Franklin, then I was able to portray and sing my version of the song; and now we have Beyonce — I mean, her generation will now know this song — so now i’m apart of history. I look at it like that, instead of looking at it as a negative. To me, it’s a great, GREAT honor to be apart of a legacy of a great song by Thomas Dorsey.

When Kevin asked John Legend about the topic at hand, he says:

We were actually approached by Beyonce. She wanted to do an intro to our performance and introduce us,” Legend told Kevin. You don’t really say no to Beyonce if she asks to perform with you.

And this is why we LOVE Ledisi here at SFPL and fully support her! That was the most intelligent and mature answer that we have ever heard from any celebrity.

Great statement Ledisi! And you will hit that Grammy stage! 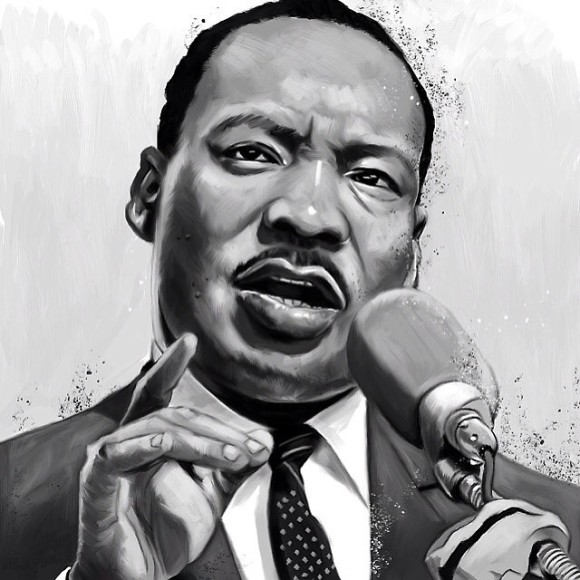 Today we remember Dr. Martin Luther King Jr., and all he fought for, so that we can achieve our wildest dreams.

Here are out top 3 quotes from MLK …