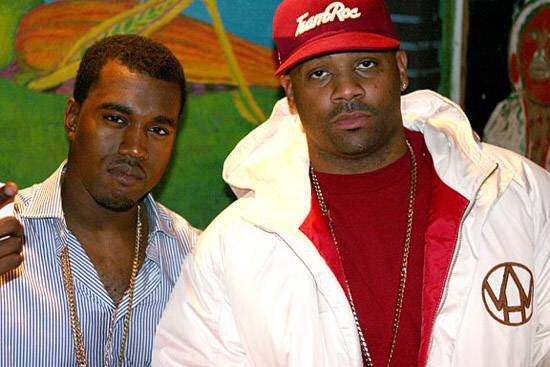 We know Kanye West says Damon Dash introduced him to the world alluding to years ago when Kanye first touched the scene. As of late, there’s been heavy talk about Damon Dash, Kanye West, and the two as a duo since they recently reuniting at the old Roc-A-Fella offices.

There’s been rumors recently that the two have shown interest in purchasing  Karmaloop, a popular street wear web retailer. The CEO of Karmaloop did confirm that Ye and Dame are one of many parties interested in purchasing the company.
Now, Latin music group called Loisaidas established in 2008, is said to be suing Dame and Ye because together they are the executive producers of a film entitled Loisaidas.
Loisaidas is slang for Lower East Side, however depicted in the film is drugs, murder, and violence. 1/2  of the duo Michael Medina believes the movie tarnishes his brand and is taking Ye and Dame to court with hopes of the judge halting production and is seeking damages.

Apparently, Dash and West recently linked up since their days at Roc-A-Fella and are now “sticking together for the generation.” Peep the trailer for the movie in question Loisaidas below.
Do you think Medina has a legit case? Leave your thoughts below.
Stay Fly!
[Fly Girl Shayna]

It’s been a week since Dame Dash sat down with The Breakfast Club and gave us one of the most “quotable” and debated interviews in a long time. Magically the #TweetLikeDameDash hashtag appeared out of thin air and produced some of the funniest tweets we have seen in a long time.

END_OF_DOCUMENT_TOKEN_TO_BE_REPLACED 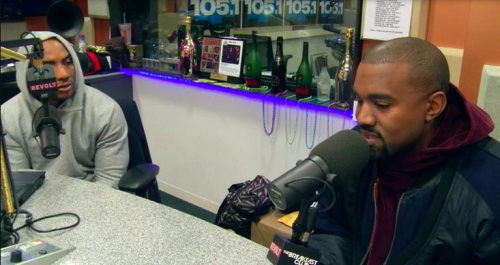 You know, good timing is always perfect! And, better what time than now, for Kanye West to stop by the “ear of streets”, as he stated, and discuss a number of topics that have been roaming around; all in just barely one month.

During Ye’s interview with Power 105.1’s The Breakfast Club, Mr. West speaks about his wife, Kim Kardashain, his ex, Amber Rose, the Yeezy Boost sneaker, Tyga and Kylie Jenner (who he thinks they’re in love), which he spilled the beans in an unedited version of the interview.

On The Yeezy Boost:

See I didn’t want them to be limited actually, that’s something that the company did. I really want as many people to get them as possible. I don’t want to price to be $350. I don’t want to play like this sneaker culture game and all this so they be reselling this for high prices and stuff. I just want people have what I make. Like ain’t no limited release to College Dropout or limited release of Graduation.

On Kim being nude in magazine spreads:

“She could get naked if she wants to. It’s not illegal. And think about this, if Adam had never ate the apple we would all be naked.”

When asked how does he feel about Tyga and his sister-in-law’s relationship, and if it’s inappropriate to him:

I think that…that was a good question right there. I think that…I think they’re in love man, you can’t…you can’t tell nobody…(from here the tape was cut short).

And Tyga felt some kind of way when he posted this way before West’s interview:

Your beauty never goes unnoticed. One of the best/dopest person in my life.

Welp! There you have it!

Peep this short clip of the unedited version where Kanye speaks on Tyga & Kylie’s relationship, saying that they’re in love:

Thursday May 16th team SFPL was in the building for Jim Jones “We Own The Night” listening event off his forthcoming Vampire Life EP helt at Rosewood NYC.Hot 97’s own DJ Drewski and DJ Spin King supplied the music as bloggers and tastemakers sipped on cocktails provided by Ciroc and 20 Grand Cognac. We didn’t get a chance to hear the whole EP but as explained by Jimmy the event was to help him choose what single he should run with. Jim played 4 cuts off the EP and based off crowd reception made his choice on what song to go with. The legendary hip-hop mogul Dame Dash and his Jim’s fiancee Chrissy Lampkin were in attendance as well as Maino, Baiyu, Mel Matrix , DJ Spynfo, Boola and more came out to support Jimmy. Checkout the rest of the photos from the night below.