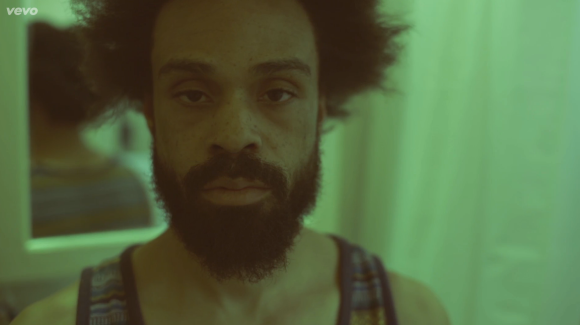 Bilal released the visuals for his In Another Life, album standout, “I Really Don’t Care” with an exclusive interview on HYPETRAK. The soul infused, “genre-bending” track paired with the dynamic, clean-cut visuals, set the tone of exactly what Bilal has to offer music lovers in the coming year. The video which is directed by one of Bilal’s close friends, Hans Elder, depicts the motions that one goes through when they are desperate to find love.

Bilal has stated that the song represents “That one last desperate attempt to find love again,” and the visuals perfectly compliment that idea.

At this year’s Grammy awards, Bilal was nominated twice with Kendrick Lamar for Best Rap Album and Best Rap/Song Collaboration. Bilal is one of the most acclaimed alternative soul singers of the new millennium working with everyone from The Roots to Common, Jay Z, Beyonce, Erykah Badu, Robert Glasper, and more. He was even one of the last performers on the final episode of the Colbert Report.

GRAMMY Nominated Singer / Songwriter Aaron Camper is ready to take the industry by storm this Fall with the upcoming release of his new EP, B.L.O.W. (Better Left on Wax).
After being a background vocalist and learning from some of the best in the music industry like Justin Timberlake, Diddy, Jill Scott, Eric Roberson and Chris Brown, Aaron is now determined to show his gift to the world with his own unique sound and charismatic stage presence.

The first single off the EP “Hypnotizing” was released this past June. It was well received by fans and R&B lovers with over 400k plays on Spotify, definitely giving him a good look on what’s to come.

“CHOOSE YOU” is the 2nd single off Camper’s upcoming EP which is set to be released this October. The new official track simply paints a picture about a man making a woman feel comforted, protected and loving her infectiously. The song features R&B Divas Star Brave Williams, a native of Baltimore, MD and former member of the girl group RichGirl.

Check it out in full below:

“Choose You” is available for download on Amazon and be prepared to hear more from Aaron Camper during 4th quarter. With Bilal’s soulful voice, Adrian Younge‘s vintage production, and Lamar’s explosive verse, “Money Over Love” becomes one of the most thrilling records on his new album, In Another Life, available now.

Prior to the album’s release, Bilal spoke with several outlets including NPR, NYLON, Ebony, and Mass Appeal about the new direction of his album and how the music is a reflection of someone else’s life. The Hans Elder directed video depicts a disturbing interracial love story that is tarnished by poverty and greed.

Check out the full video below:

We all know the trending term; “Bye Felicia!” Well, to keep the emphasis going, singer-songwriter-musician Rudy Currence flips the populated saying and makes a song out it, touching on the fact that everyone has a “Bye Felicia” somewhere around.

Whether it’s a friend, family member, or girlfriend, Felicia is alive and in-color.

Man, I was just being creative. That track has always been my favorite record from Bilal. So, when I started writing to it, that’s what I came up with. Then I flipped the end so that its live too.

Very fitting to drop the refix cover, as Bilal will be dropping his official album ‘In Another Life’ on June 29th!

Rudy killed this track — check it above!

Fly Stream: Listen To Bilal’s New Album ‘In Another Life’

Recently, Bilal premiered his new single, “Pleasure Toy” featuring Mississippi artist, Big KRIT. He also received great reviews about his album’s first single, “Satellites.” After a full listen to In Another Life, it is understandable why the soul crooner trusted Adrian Younge to produce the entire album because tracks such as, “Money Over Love” featuring Kendrick Lamar and “Holding It Back” featuring Kimbra shows the musician’s eminence amount of growth and versatility. Currently, In Another Life is available for pre-order and be sure keep a look out for Bilal’s new music video “Money Over Love.”
Listen to In Another Life on Pandora HERE
Pre-Order In Another Life on iTunes HERE
Watch the “Satellites” Music Video HERE
In Another Life Track-List
“Sirens II”
“Star Now”
“Open up the Door”
“I Really Don’t Care”
“Pleasure Toy ft. Big K.R.I.T.”
“Satellites”
“Lunatic”
“Money Over Lover” ft. Kendrick Lamar
“Love Child”
“Holding It Back” ft. Kimbra
“Spiraling”
“Bury Me Next to You”

CoS called the single, a “groove-filled cut is all about kicking back and letting music and a *certain someone* touch both your body and soul.” The featured song is a diversion the emotionally filled “Satellites” that Bilal premiered through NPR last month.

Bilal’s string of singles compliment the larger story of his 5th studio album, In Another Life. Bilal uses music to tell the stories of others based on what he sees in the news and stories he hears from his friends and family. He is truly taking his fans through journey of someone else’s eyes.

‘In Another Life’ will be available to fans June 30th. Pre-order the album now to receive the “Pleasure Toy” single here.

From his forthcoming June album Another Life, Bilal delivers a single-cut entitled “Satellites.” Finally, the “Soul Sista” singer is back in our headphones on the solo tip, while still keeping himself afloat on Kendrick Lamar‘s latest project To Pimp A Butterfly.

Take a listen below and let us know what you think:

Did we see it coming?! Nope. Not at all. But we’re glad it happened!

Kendrick Lamar, the conscious lyricist busted the seams of social media and dropped his FULL album ‘To Pimp A Butterfly’ just 8 days early than it’s actual release date. Of course, fans, media and celebs were all talking about Lamar’s impromptu project drop.

He first chimed-in with this on Sunday night:

ICYMU: It was the 20th anniversary of Tupac Shakur’s Me Against the World.

Keep calm. All is well.

Next thing you know…the bomb dropped:

Yup, Kendrick pulled a Beyonce move and now, Sunday will never be the same. It seems as though “the weekends” are now officially the surprise album, single and video release days.

On this album, KL digs into the jazz-funk roots of music, encasing his lyrical equality, providing much mental food for all to talk about. #TPAB features appearances by: James Fauntleroy, Snoop Dogg, George Clinton, Bilal, Ron Isley and more. It’s pure perfection!

Even Empire‘s own Timbaland spoke about the album:

boy this @kendricklamar album is seriouss. if you havent checked it please do. wow my dude kilt this joint

Check it out below and let us know what you think:

Bilal returns with a new video for “Slipping Away” from his 2013 standout album A Love Surreal.  Shot while traveling Europe, Bilal is seen walking the streets in search of lost lost. Peep the full visual below…

END_OF_DOCUMENT_TOKEN_TO_BE_REPLACED

On Saturday, September 13th, 2014, Atlanta proved that not only is it still an epicenter for great music but that it has the power to usher in some of today’s hottest, most innovative, musical revolutionaries with ONE MusicFest.