Last night, HBO hosted the official NYC premiere of the highly-anticipated stand-up comedy special of AMANDA SEALES: I BE KNOWIN’ with actress and comedian Amanda Seales. The VIP event took over TriBeCa’s Roxy Hotel and theatre space to host the intimate viewing party and cocktail reception.

Inside the event, guests enjoyed an event-themed cocktail, delicious small-bites, popcorn, and other concession stand snacks before gathering inside the theatre to get an exclusive first look at the comedy special. HBO’s SVP of Marketing LUCINDA MARTINEZ made opening remarks before passing the mic to SEALES who welcomed her friends, family and influential guests to the screening.

Following the screening, guests were treated to an exclusive Q&A discussion with Amanda Seales moderated by The Breakfast Club’s ANGELA YEE. During the discussion, Seales touched on topics like writing the special specifically for black women, her writing process and the 37 years that lead up to her debut special.

Guests were also treated to a hard-copy of the official “I Be Knowin’” Digital Magazine (available on HBO.com). 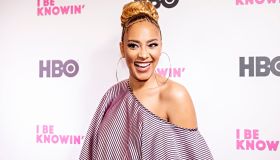