They say this is a big, rich town.

It’s been a year, but we finally get to hear Joe croon those sweet words again from our television speakers because Power is back. So here is a quick rundown of last season. The gang is all here, well everyone except for Raina, played by Donshea Hopkins, who gave her life defending her bonehead twin brother in the leaked penultimate episode. Season 4 ended with Riq, played by Michael Rainey Jr., getting revenge on Ray Ray for viciously taking out his sister, parents, and uncle showing up just in the nick of time to cover it all up. When all signs pointed at Dre for being responsible for everything, Ghost, Tommy and Kanan decide to join forces to take out the opportunistic budding drug lord.

So let’s get into season 5, shall we? 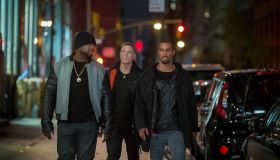