Riq Tries To Get The Hell Out Of Dodge.

Riq irritates the hell out of us and we are quite sure everyone feels the same exact way as we do at this point about this character. After realizing he’s not built for a life of crime, Riq puts his plan in motion to get the hell out of dodge and take his lean sipping ass to Connecticut to go to a private school like his sister suggested.

With his former partners in crime Brains and his crony looking for him, the pressure is on Riq who knows they are not just looking to discuss the incident that happened last episode. Riq thinks he has it all figured out but little does he know that Brains will be the least of his worries. “Officer” Ray Ray is also on the case and he is looking to tie up the loose ends that may lead back to him so that includes everyone involved with the robbery.

Riq does his best to avoid Brains by continually dodging his phone calls but that method eventually fails when Brains finds Riq shooting hoops.

Brains isn’t there to play ball either , he wants to know why Riq isn’t returning any of his texts? Riq plays it cool with them but he brings up Ray Ray which is a cause for concern with Brains. After the brief conversation it would seem that Brains is content with Riq’s explanation for running out of the house after seeing them kill that white woman. Things don’t ultimately work out for Brains and his buddy though.

Ray Ray stops by to ask them some questions about the job and they explain what happened.Ray Ray plays it off real smooth like he’s just there to help them cover it all up but that wasn’t the case at all. Ray Ray was there to start operation keep the heat off his ass and he kills Brains and his partner .

The next person on that list is now Riq and he wastes no time in seeking him out.

Ray Ray heads to Riq’s to school to look for him and interrupts Raina’s class to ask her about his whereabouts.

Raina being the loyal good sister she is, informs Ray Ray she doesn’t know where Riq is. Now Raina is no dummy and she clearly gets her detective skills from her momma. She find’s Riq’s strung out ass knocked out in his room, she tells him about the cop that paid her class a visit looking for him. She tells Riq his name and he reveals to her that Officer Raymond is a crooked cop .

Raina already figures out that’s why he wants to leave now and Riq confirms her suspicions. Riq makes Raina promise not to tell anyone especially their parents and she agrees.

With his plan in motion to leave, Riq meets up with his boo Destiny to make sure he has his lean supplier in the loop and let her know about his school change.

. Unfortunately for Riq, Destiny is related to Ray Ray and he uses her to set up a meeting with Riq.

Ray Ray now knows that Riq will be attending his school dance, and this will set up an unfortunate turn of events that will turn the St.Patrick’s lives upside down. 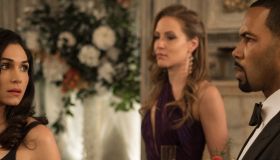