With a dynamic start to 2017, Mack Wilds is aiming to dominate television and music alike. Alongside starring in the VH1’s hit series The Breaks and the critically acclaimed FOX Series Shots Fired, Wilds releases his new project After Hours. Inspired by love, women and the turbulence of relationships, the project is the sophomore release from Mack following his first album New York: A Love Story released in 2013.

“A lot of these songs, when I had a chance to actually record— they were recorded at night. While I was shooting “The Breaks” and “Shots Fired”, that was the only time I had to myself or to even get into the studio.” Mack tells GENIUS. “I drew on an inspiration that came from looking around and seeing how things change at night time, how things feel at night time. Text messages at 2 a.m. look different than text messages at 2 p.m. Break-ups feel different at night. “

Today, Mack Wilds also releases the teaser for his upcoming series, ‘After Hours’ which will premiere exclusively via TIDAL on Friday, April 14. ‘ The 6-part miniseries is the perfect accompaniment to the full-length music project. Co-Written & Directed by Mack and Greg Cally, each episode of the miniseries is a visual interpretation of a song from the ‘After Hours’ platform.

ALSO READ: ‘Shots Fired:’ A Searing Examination Of How Police Investigate Their Own 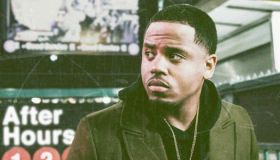