Kanye West has officially cancelled the second leg of his Saint Pablo Tour.

Dates had yet to be announced along and no tickets had been sold at the time of the cancellation.

The news comes after Yeezy cancelled the remaining dates of the first leg following his hospitalization for dehydration, exhaustion, paranoia, and depression a few weeks back.

The tour was likely heading across the pond making stops in the U.K., France, and Germany. The “All of the Lights” artist need not fret cutting his tour short especially as his finances are concerned. Ye has an insurance policy in place which covers any profits lost or expenses as a result of cancellations due to health-related issues.

Good news for West who is currently recovering from his hospitalization and is said to be working on a new album. He’ll be able to focus on his recovery and spending time with his family. 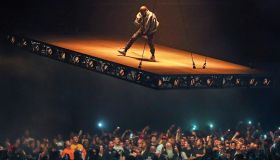