Gabriel Williams (@Gabriel_Will1)
KeKe Palmer & TheYBF.com‘s founder Natasha Eubanks sat down this week for a crazy new episode of The YBF Podcast, plus a mini photoshoot!  It was all hosted at the gorgeous Samsung 837 experiential flagship & cultural destination in New York City’s Meatpacking District.
KeKe talks about getting the internet trolls together, her sexy 90’s inspired image, her new NBA love interest, why she used Kylie Jenner to talk about beauty standards, and gives the tea on the movie industry. While chatting about her new EP Lauren, she exclusively revealed what she’s working on with Chris Brown.

KeKe also dished on why she’s unbothered by people who don’t love her new image, the MAJOR divas she wants to play in a biopic, that tragic Aaliyah biopic, playing in a new lesbian love story movie called “Pimp”, the craziest celeb contacts in her phone, and who she would smash-marry-kill (both men AND women).

On clapping back during social media drama:

“You see me clapping back because I’m a real person.  I don’t feel like just because I’m on tv I have to hold myself to the standard you think that I should.  I want everyone to stop believing and buying into ‘Just because you’re famous, why would you pay attention to me,’ and all these things that aren’t true.. “

On her new crush:

“Jimmy Butler [of the Chicago Bulls].  Girl, he is fine!”

On the Kanye & Trump debacle:

“You don’t know if he’s doing it all for a gag or…Him and Donald Trump could be in on some ish together for all we know.  There’s so much entertainment that goes on and it’s so well thought out and so organized, I don’t even think people realize it.”

On sexism:
“The age thing, I always felt. The African American thing, I always felt.  The sexism, that came with womanhood. I could not believe it. It is horrific. My mama always told me to keep your eye on the prize…We honestly do have to swallow our pride. Women have to do it more then men do….[So now I say], ‘I’m listening to you, I’m loving everything you’re saying. But last time I checked, I had 4.4 million followers and I don’t need you to let me release my video.'”
On what she REALLY meant by her Kylie Jenner social media post about beauty standards:
“It’s no disrespect, but this family is the biggest example of this which is, ‘I’ll do anything that they want me to do to get the attention.’ When people are saying ‘Yeah I love this,’ you’re buying into them saying ‘I’ll do anything to make myself the beauty standard’….We send a lot of different conflicting messages.  When was the last time we ever praised a girl for being natural [physically]?”
Close
Sign up for the FLY Newsletter…
Thanks for subscribing to the SFPL newsletter - please be sure to open and add us to your contact list so we don't end up in your spam folder.
The YBF Podcast is the newest entity of TheYBF.com.
Aaliyah , Chris Brown , Gabriel Williams , Interview , KEKE PALMER , Kylie Jenner , Natasha Eubanks , Samsung 837 , The YBF , The YBF Podcast
Also On Stuff Fly People Like | SFPL: 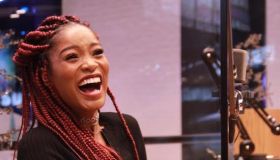