Negan introduces himself to the quaint community of Alexandria. The problem is he is week early and Rick and the gang are not prepared to really offer him anything.

Tonight’s episode opens up with Michonne sneaking out the house with a sniper rifle to practice with. Looks like she’s making sure her aim is true for a particular moment. 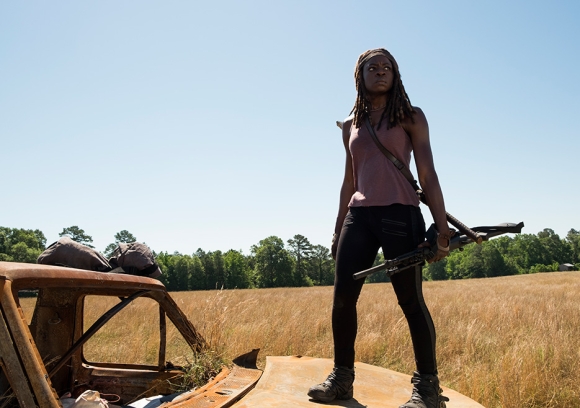 Unfortunately her skills with a rifle stinks cause she couldn’t hit the side of a barn with her shooting. Her target which happened to be a slow-moving walker and she still missed it. She did manage to kill a deer with one of her stray shots though, we’re just gonna chalk that one up to luck.

Back in town we the good folks of Alexandria are getting a glimpse of their fearless leader Rick being systematically broken down by Negan. 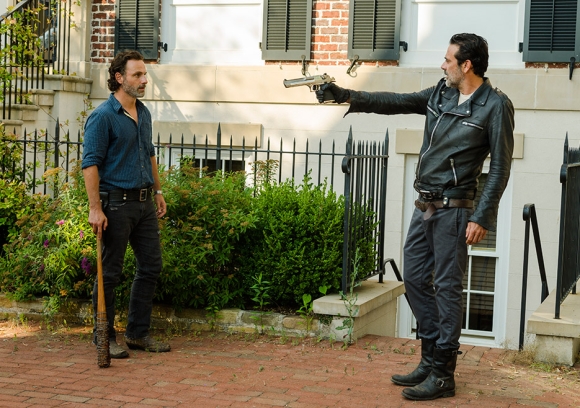 Negan and his Saviors came to town early to claim “what’s theirs” and that is all of the towns weapons and whatever else they liked basically furniture, mattresses and other lovely items. The Alexandrians have no idea whats going on but they do know that Negan is a dangerous man by the look on their fearless leader’s face.

Things get a little scary when one of the Saviors point out to Negan that there are two guns missing from the armory.  Negan gives Rick an ultimatum, he has to find the guns or Olivia dies, and Rick is over being responsible for anymore deaths.

Rick goes on a scavenger hunt and finds two guns stashed in Spencer’s home along with some extra food and liquor. Rick gives the guns to Negan saving Olivia and any other Alexandrian from the wrath of Negan and Lucille for now. Negan really didn’t come there just for items though, his main goal was to belittle their fearless leader in front of everyone and he succeeded. Rick lets everyone know that he is no longer in charge and that it’s Negan running the show now.

Rick’s boo Michonne finally returns from sniper rifle practice and Rick spots her. He ask’s Negan if he can have a second to speak to her so can he procure the rifle from her before any more unwanted drama ensues. Michonne is reluctant to give up the gun but Rick convinces her it’s for the greater good. Negan accepts the weapon and for good measure takes the deer Michonne killed. Negan and The Saviors leave, but not only did they leave with guns and furniture the most important thing they left with is Rick’s soul and full cooperation.

There is still one gun left though, Rosita and Spencer were sent out on a mission to retrieve Daryl’s bike for Dwight. Yes Dwight clearly thinks he is Daryl now for some strange reason. While on the mission Rosita encounters  some walkers and one of them has a gun on them. Rosita easily dispatches the undead and takes the gun but it’s empty. She brings the gun back to town not knowing that could spell disaster for the Alexandrians.

When they get back to town with the bike, Spencer and Rick have a conversation about the items he found in his house. It’s there Spencer lets his frustrations be known about Rick and how he dealt with Negan and The Saviors. Spencer feels Rick should have bargained with them from the jump and that would have saved them a lot of trouble. Rick of course doesn’t agree, while he is walking away Spencer brings up Glenn and Abraham’s death to Rick. It’s there we still find out that Rick is still his tough self and he tells Spencer if he mentions them again he will break Spencer’s jaw and knockout his teeth.

Rick and Michonne have a heart to heart about the situation. Michonne isn’t really here for just laying down and letting Negan take everything. Rick tells Michonne about Shane and Lori and reveals that he knows Judith isn’t his daughter.

Rick finally convinces her that in order to remain alive complete cooperation with Negan is vital. Michonne heads back to the field where she was practicing her aim and she discovers all of the mattresses set on fire.

Back in Alexandria, Rosita is the only person in town with a gun and she plans on using it! She finds Eugene and asks her to craft her a single bullet from a casing she found. Things are only gonna get interesting from here on in with Rick and the gang.

Hit the gallery below to see hilarious memes generated from tonight’s episode: