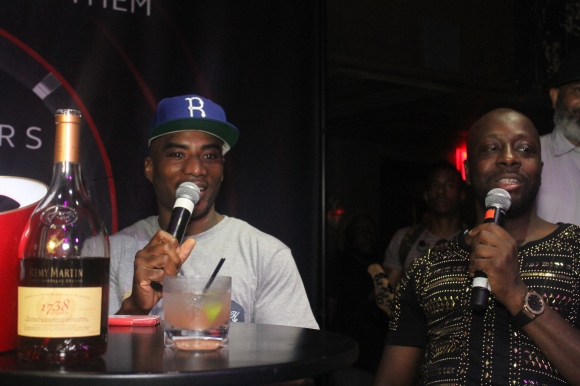 The format of “The Producers Series,” typically, only includes a quick interview with the super producer, a “tech talk” breaking down one of the producers’ most famous tracks, and then the one round producer competition.

Well, Wyclef took it to a whole-nutha level! From “doors,” as guests entered Tao Downtown, they were treated to Clef, on his bass guitar, battling DJ Rey-Mo as he spun. Clef continued by dropping jewels of wisdom steeped in his nearly 30-year career, as he chopped it up with Char. During his “tech talk,” he broke down multiple diamond hits including “Killing Him Softly” and “My Love is Your Love.” Additionally, responding to calls from the crowd, Wyclef showed up a “fan” claiming to have bars, but ended up choking TWICE; and gave an impromptu mini-concert; all for the capacity crowd.

This week’s “Season 2” qualifying round didn’t disappoint either. Competing up-and-coming producers JL Beats, Point 1 and Rizz Beats battled it out for the second semi-finalist position. For the first time in the series, two of the producers ended up in a in a double tiebreaker–JL Beats and Point 1–with Point 1 proving to be the crowd, the judges, and Wyclef’s favorite moving on to the September finale. On the spot, Clef offered to buy Point 1’s winning track.

Next up on the ‘Rémy Martin Presents “The Producers Series: Season 2″‘: the series heads to Boston for the next qualifier, Monday, July 25. This season Rémy Producers expanded the series into Boston and Philadelphia; the Philly event will be held in August. Season 2 finale will be held in New York City in September.

Check out the video recap below: