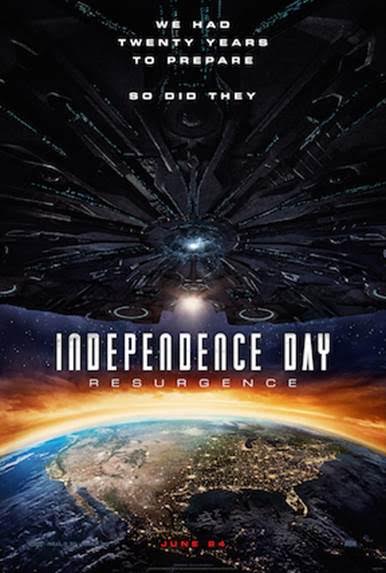 t’s been 20 years since the catastrophic events of the first movie where intergalactic baddies paid a visit with the intentions to wipe out the human race. Thanks to the brave efforts of Marine pilot Captain Steven Hiller (Will Smith) and satellite expert David Levinson (Jeff Goldblum) successfully delivered a virus to alien’s mothership wiping out their defenses allowing the Earth’s forces to wipe out the invaders in a massive coordinated effort.

Flash-forward to the present, since the last invasion with help David and the left behind alien technology the Earth has been preparing if and when the aliens come back.

They will soon learn that the attack 20-years-ago pales in comparison to the one that’s about to take place. The aliens have been preparing as well to take their revenge on the humans for killing their buddies. The scale of destruction this time around is intense compared the event took place in 1996.

In Independence Day: Resurgence we catch up the with the kids of the heroes, Dylan (Jessie Usher) is all grown up now and is following in the footsteps of his step-dad whom is now deceased so yeah no Will Smith in this movie period.

Former President Thomas J.Whitmore (Bill Pullman) also returns in the second film. His daughter Patricia Whitmore (Maika Monroe) is also grown and is dealing with her dad who is clearly going through it. Her father is still suffering from the after effects of the previous battle with the aliens but always knew in the back of his mind they would return.

The battle for resumes June 24th!

Will Smith- I Will Not BE In The ‘Independence Day’ Sequel