New York City based rapper, Skematics, is new to the scene but is no newbie when it comes to Hip Hop. On his latest single, “Thou Art God,” the Washington Heights bred MC, shows he can hang with veterans in the game – like the late, Sean Price. The two emcees linked just months before Price’s untimely passing and were in talks about shooting the video together. In his honor, Skematics, and video director, JD Ferenc, pieced together rare footage of Sean Price.

The video even includes exclusive, never-before-seen footage of Sean Price rapping in the same cipher Skematics was a part of.

“Thou Art God,” produced by East Uticas Panassassin, is the third single off of Skematics’ Somewhere in the Gray EP. The song is the epitome of classic NY Hip Hop. 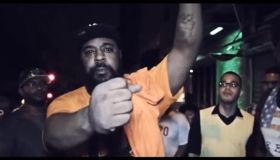