On The Gram: The Walking Dead Season 6, Season Finale Recap and Memes

WOW, JUST WOW! Tonight’s season finale had everyone on edge tonight especially with folks waiting on the arrival of Negan finally.

The finale picks up where the last episode left off with the group worried about Maggie and the baby. They decide they need to make a trip to Hilltop to see the doctor to find out what’s going on with Maggie and her seed. Maggie is in bad shape and can barely walk so things are very dire. They load her up in the RV, Rick, Carl, Abraham, Eugene, and Sasha set out on the mission to save Maggie and her child. They will come to find out that journey will not be as easy they think it will be.

So how’s Carol faring on her lone journey?

Morgan is still looking for Carol and he successfully finds her as well as a horse, but Carol is not looking good after her encounter with some the Saviors. Morgan stitches Carol up and tries to convince her to come back to Alexandria but she doesn’t want too. Carol manages to sneak out while Morgan is outside taking care of a walker literally hanging around. Morgan discovers Carol is once again gone and hops on his new buddy the horse and sets out to find the wayward and now reluctant warrior once again.

Carol is still moving along, but she encounters one of Saviors she thought she killed. He’s been on a mission for revenge ever since Carol easily dispatched his Savior brethren. Carol is not in top shape to take on anyone so the Savior had his way with her. Thing’s aren’t looking too good for our favorite killer/baker as the Savior begins to torture her by shooting her in strategic places such as her hand and arms. He want’s to make sure she suffers a very painful and slow death. Unfortunately for him he’s gonna wish he took her out quickly cause Morgan rides in to save the day. Morgan is still on his trying not to kill movement but his buttons are pushed when the Savior makes an attempt to kill Carol. Morgan wastes no time and puts six bullets in the Savior and in the process saves Carol.

We also get introduced to two new characters who remain nameless but will be important come season 7.If you remember we  did get a glimpse of one of them when Rick and Morgan bumped into him looking for his horse.

Now back to operation save Maggie

Well at least that ended on a good note right? Can’t say the same for Rick and the gang. The journey to Hilltop turns out to be a very deadly one. The Saviors have blocked off all roads towards the town putting Maggie and the babie’s life in serious jeopardy.

RIck is visibly running out of hope and ideas, in a last-ditch effort Eugene suggests that they walk on foot and he will drive the RV sacrificing himself for the greater good. Seemed like a brilliant plan as the Saviors will only be looking for the RV and not expect on them to be traveling on foot.

WELL that plan didn’t work either!

Eugene didn’t even make it far before he was captured and the Rick and co walked right into Negan and the Saviors hands. Having no choice but to surrender, our favorite group of survivors get on their knees and are finally introduced to one of the most dangerous men in The Walking Dead’s comic universe NEGAN!

Negan made it perfectly clear that someone will pay for him losing a lot of men thanks to Rick and the gang. He did assure them all of them wasn’t going to die because he needs them to work for him but SOMEONE IS GOING TO PAY!

Yeah our stress levels are on a hundred at this point. Negan begins the selection process of who is going to get acquainted with his trusty spiked bat Lucille.

#SpoilersWarning #thewalkingdead Who do you think got the bat?

After the frightening rendition of the childhood game eenie,meenie,miney, mo and we are very sure it was never this scary when were kids, Negan finally makes his selection. Here’s how the brutal killing went down:

The episode ends on a cliffhanger, leaving it to your imagination who you think got a dose of Lucille to the head. Well we put up a little poll to see who you guys think met their demise at the hands of Negan so feel free to cast your vote below.

Who do you think #Negan killed on tonight's #TWDFinale ?

Now of course we live for the instant reaction from the social media universe especially on the gram. The memes pretty expressed disappointment, shock, and despair at the idea of one of their favorite cast members have died. Peep them all in the gallery below. 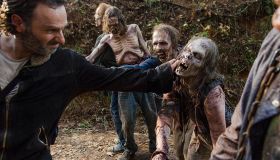 On The Gram: The Walking Dead Season 6,…
Close