Rumors have been swirling of an impending new album from Queen Bey, and while we’ll have to wait and see if she delivers another surprise album, what we do know for sure is Beyoncé will be blessing the hive with some dope new threads.

Last year we learned Sasha Fierce was teaming up with Top Shop to create her own line of athleisure wear. Today she announced the launch of her new fitness brand Ivy Park with a commercial oozing with female strength and inspiration.

It seems B is not only taking her talents to Top Shop, but Net-a-Porter and Nordstrom along with a handful of other retailers overseas. Ivy Park will be available online and in stores on April 14th.

The line features fitness basics like leotards, sweats, swimwear, tops, shorts, and headbands. Beyoncê has managed to make athleisure wear for the fashionista in all of us.

The name for her new line was of course inspired by her daughter Blue Ivy Carter who makes an appearance in the video, and the childhood park she speaks about in the two minute preview.

“I would wake up in the morning and my dad would come knocking on my door, tell me it’s time to go running. I remember wanting to stop, but I would push myself to keep going. He taught me discipline and I would think about my dreams. I would think about the sacrifices my parents made for me. I would think about my little sister and how I was her hero. There are things I’m still afraid of. When I have to conquer those things, I go back to that park.”

Beyoncé can also be seen sporting her new line on the cover of Elle and Elle UK for their Women In Music/May 2016 issues. Queen Bey sat down with ELLE for a rare in-depth interview where they discussed freedom, feminism, her new fashion line Ivy Park, and tons more. The May issue of Elle will be available digitally April 5th and on newsstands April 6.

For more information on B’s latest venture you can head over to IvyPark.com. You watch the commercial for Ivy Park below. What do you think of Beyoncé’s foray into the world of fitness wear? Will you be flocking online or to your nearest retailer when it drops April 14? 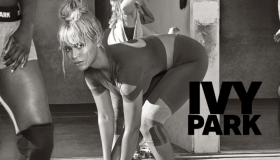