On The Gram: The Internet Is Having A Field Day With Blac Chyna and Rob Kardashian’s Relationship

The internet has been set ablaze since Rob Kardashian and Blac Chyna have gone public with their “relationship”. Rumors and speculation have been swirling of the Kardashian/Jenner clan not too pleased with Rob and his romance with Blac Chyna.

Khloe even tweeted this picture out:

Never go against THE Family pic.twitter.com/23BG5r9U0p

A sub sent in the direction of her brother Rob maybe? Hmmmm. Well not pictured is Kylie and she is “livid” and feels “betrayed” by her half-brother according to People.com.

Meanwhile the new couple doesn’t even seem to be bothered at all about what the Kardashian/Jenner clan thinks. Chyna’s snaps clearly indicate they are un-bothered!

#BlacChyna and #RobKardashian working out… Also, this is Blac Chyna's house… In her personal gym.

They even are rumored to be shacking up together ALREADY, “temporarily”according to TMZ. They exclusively reported:

Rob, who was living at Khloe’s house, has been at B.C.’s digs for 5 days and counting. As for how it happened … we’re told Rob made the first move by DM’ing Chyna 2 weeks ago.

We’re told Rob genuinely likes Chyna and is not hooking up to upset his family … but we’re told it has definitely upset the Kardashian brood. Kylie has been at war with Tyga’s baby mama for more than a year.

Rob is using Chyna’s home fitness equipment to train, with a little inspirational help from her.

Rob and Chyna have known each other for a long time … since she lived across the street from him when she was Kim’s best friend.

The folks who are having the most fun with this new union is the internet of course. No one enjoys the Kardashians going through some sort of turmoil more than the web. Instagram is getting a kick out of Chyna’s level of petty. The creative folks on the web even came up with this pretty clever meme for Chyna.

Oh it didn’t stop there, the memes flowed like fresh lava from a volcano that just erupted and it was swift. Hit the gallery below to see the funniest and most creative memes about Rob and Chyna’s relationship. 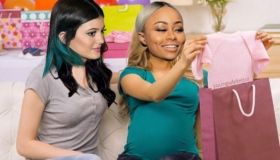 On The Gram: The Internet Is Having A…
Close