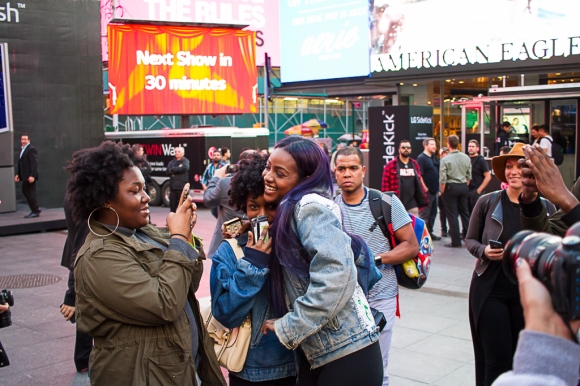 Another day, another FLY visual premieres in the heart of NYC famous tourist spot Times Square. Today the “Purple Unicorn” Justine Skye premiered her lyric video for “I’m Yours” featuring Vic Mensa and team SFPL was on hand for the moment. Hit the jump to see photos of Justine sharing the big moment with her fans aka Unicorns.

The video premiered via Apple Music on the Beats Billboard located in times square. Fans gathered and waited for her arrival by the red stairs located in the middle of Times Square.

To help pass the time, Justine rewarded her fans loyalty and support by taking plenty of selfies with each and every one of them and supplying hugs.

@justineskye enjoying the moment with her fans 👌🏾

Justine also well know for her large social media presence made sure that those who couldn’t be there for her big moment could still experience via Snapchat.

It was a great moment indeed for both Justine and her fans. The video itself isn’t a typical lyric video, boasting some heavy cameos from her besties Kylie and Kendall Jenner, model Shaun Ross, actor Keith Powers and phone cameo from the feature artist Vic Mensa. The squad links up for some karaoke and the song of choice is Justine’s record of course peep it below.

Congrats Justine, we love the video! Justine is currently about to embark on her “Emotionally Unavailable” Tour which kicks off in NYC December 2nd. Tickets are on sale now and can be purchased on her personal website as well as info on other tour dates.

Hit the gallery to see more photos from the meet up.