On The Gram: The Strength in Numbers! Captivating Moments From The Million Man March 20th Anniversary

Are you an activist or a hustler? Are you really worried or is this just the place to be? You a protester or an Agent? You going to complain or make a change? Questions I need answered – Jody Green

The Million Man March of 1995 was a congressional movement of the mass black community. Organizing and attempting to preserve the idea that African-American Men were to be seen and respected as a whole, as in fact a community and not as a threat to humane society. In our words, a movement to gain, and withstand power and ordain leadership within society that we as a people matter.

And today, here we are 20 years later struggling with the same battles of yesterday. Asking the same exact questions, hearing the most similar cries and seeing familiar tears with answers remaining slim to none.

But this go round something was different…

The element of fear does not live here anymore! And we’d like to say that loosely as not to claim that the unity of 1995 was fearful. But only to exploit the amount of growth we have acclaimed over the years.

There’s a unique sense of pride in the base of the voices you’ve seen in these pictures today whether they have spoken or not.

Symbolically, they have screamed loud for the people, for the families that lost loved ones to police brutality and so much more.

We can’t deny it for one second. Its tough seeing the tremendous efforts of our people be shunned away by mainstream media.

The photos here were collectively taken by Jody Green. Please take the time to enjoy more of these amazing shots and moments.

Hit the gallery below to see more power photos from the historic day! 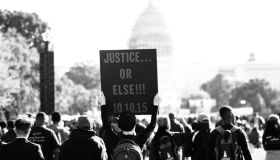 On The Gram: The Strength in Numbers! Captivating…
Close