He Doesn’t Have Time To Bleed: The Rock Smiles and Shows off Gruesome Injury On Instagram!

The Rock proved to the world just how much of bad ass he really is today when he posted of video of himself smiling after suffering a gruesome on set industry.

We must have watch this video a hundred times, it doesn’t even look real but apparently The Rock broke his finger while filming and was still all smiles.

You gotta to be one tough hombre to be able laugh and smile through something that painful, checkout the video below.

I ain't got time to bleed..

The Rock is currently on location filming his new movie Central Intelligence with Kevin Hart. This isn’t the first time The Rock had a mishap on the set of this film. He was ‘almost killed’ by Kevin Hart while filming, Hart shared the footage of that incident the superhuman Rock walked away from.

Take it easy Rock, we need you for more movies bruh! 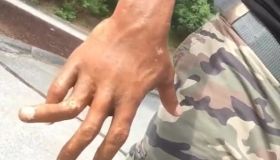 He Doesn’t Have Time To Bleed: The Rock…
Close