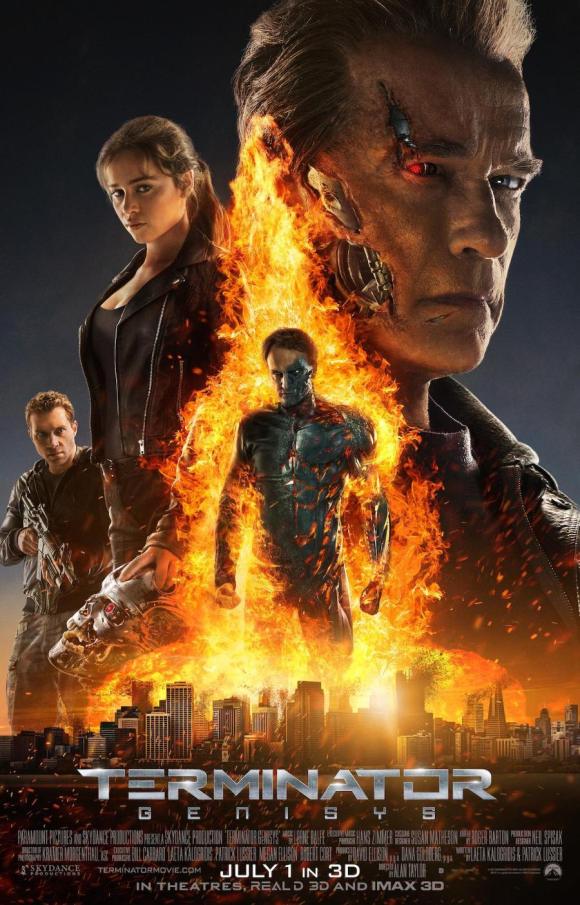 Arnold Schwarzenegger is “old but not obsolete” and still fully capable of saving the world from the apocalypse in the action packed reboot Terminator Genisys.

Now we know you probably seen the trailer for Terminator Genisys and immediately thought the same old Terminator story, just with some new faces. We are happy to report that it’s not the same old song and dance with the latest installment and that Genisys gives the franchise the shot in the arm it needs to survive with a new generation of fans. 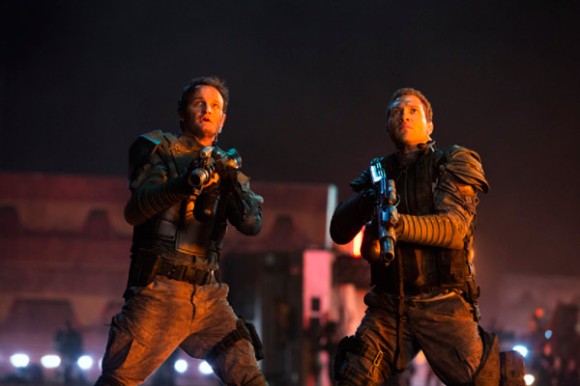 Terminator Genisys takes the story we knew and puts a millennial spin on it. The movie is pretty much told from Kyle Reese’s (Jai Courtney) perspective for the first time. He breaks down the whole story for those who don’t know it already,of how the world he knows came to be and how he developed his man crush on the resistance leader John Conner (Jason Clarke). For the first time we actually get to see the events that lead up to Kyle being sent back in time by his Son to protect his mom Sarah Conner (Emilia Clarke). Yes we know it’s a lot but the directors somehow manage to make it work.

In the Genisys storyline we learn that the John Conner led resistance does in fact defeat the iconic evil computer A.I. Skynet in the future. John Conner learns though that the machines have built a time machine in an effort to go back in time to completely erase Jon from existence with death of his mom. John explains to Kyle without revealing the fact he is in fact Kyle’s son and why they must stop the machines from activating the time machine and going back in time. While they are successful in taking down Skynet a Terminator still manages to go back in time and here is where the whole Terminator franchise begins.

Kyle accepts the mission to go back in time to 1984 to protect a Sarah Conner who is a waitress that couldn’t stop a cold. An event happens that greatly changes things as he is being sent back in time greatly affecting the timeline.During the time jump he starts receiving fragments of memories and warnings from his 12-year-old self. Upon arrival things are not exactly as they are supposed to be as John explained to him as he is greeted by a T-1000 (Byung-hun Lee) who moves exactly at like Terminator 2’s version played by Robert Patrick.

We are also introduced to the new Sarah Conner she is already a battle tested Terminator hunter thanks in large part to a Terminator she affectionately calls Pops who saved her at the age of 9. 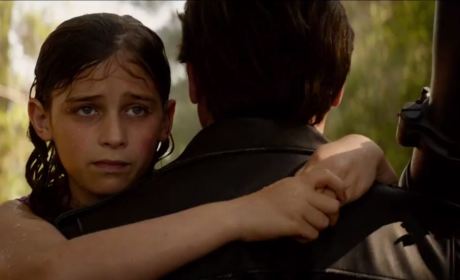 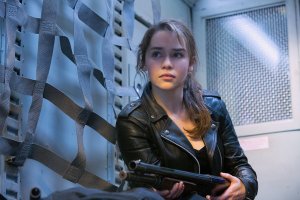 She and her guardian Terminator easily dispatch a very young and very much naked Arnold circa 1984, pops is visibly older as it is explained the flesh on the Terminators does age not the machine itself. Like pops says numerous times throughout the movie he’s “old but not obsolete”. 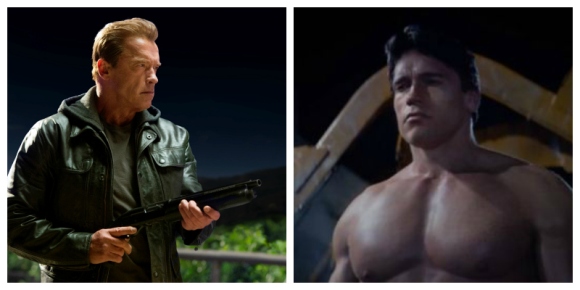 Terminator Genisys version of Sarah Conner takes her cues from Judgement Day’s Linda Hamilton as far as toughness and bad assness is concerned and definitely pays homage to her. 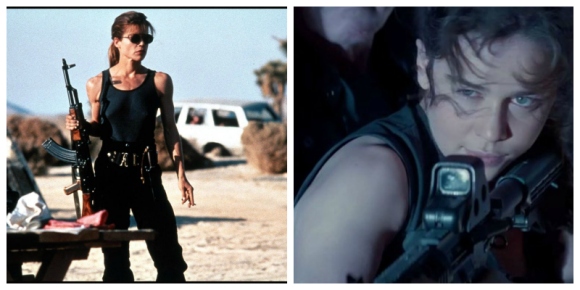 Kyle and the new Sarah Conner eventually meet up in 1984, Kyle is immediately thrown for a loop cause Sarah is not the damsel in distress he was told she would be and she rescues him from his from the T-1000.

What shocks him even more is the fact she is working alongside a Terminator completely throwing a wrench in his mission. He doesn’t take to well at that sudden development but eventually comes to terms with it. 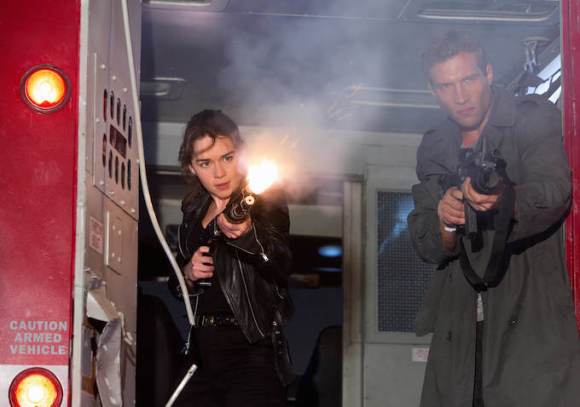 The trio immediately starts working together as they acknowledge there is definitely something different this go around.

They reveal to Kyle that they have been working on their own time machine and plan on going to the future 1997  to stop Judgement Day from happening. Kyle is convinced things are different  explains to Sarah and Pops they must go to the year 2017 instead and thus the new adventure begins.

Kyle and Sarah arrive and are taken into custody, the big surprise is that they meet John their son there.  He at first seems like the same old Jon from the future but things are very different. As John helps them escape from police custody, an even older Arnie shows and reveals John is a new Terminator the T-3000. 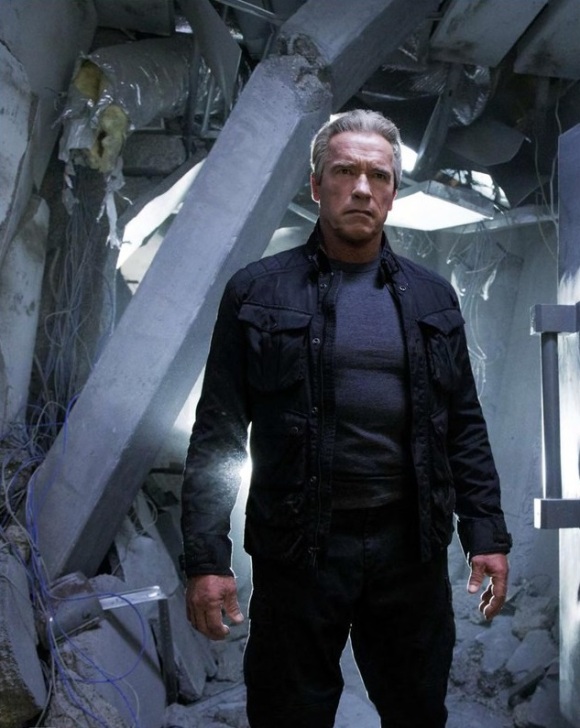 Terminator Genisys takes our current obsession with our smart phones and puts an apocalyptic spin on it. Skynet is no more but now is called Genisys an app created by Danny Dyson (Dayo Okeniyi) son of  Miles Dyson (Courtney B. Vance) with help from evil John Conner, set to launch and bring forth Judgement Day.

Fans of Terminator 2 will remember these two characters, Miles was the original inventor of the neural-net processor which would eventually lead to the development of Skynet.

With the new developments revealed, their new mission is now clear and they have to find a way to stop Genisys before it launches. A job easier said than done now with an even more powerful foe in John to make sure Genisys is launched.

Terminator Genisys isn’t a perfect movie by no means but it is damn good popcorn flick full of action and a great twists. The new spin on story is refreshing and breathes life into a situation we got bored with previous films.Terminator Genisys has the potential to take the franchise in a completely new direction and gain a new generation of fans. 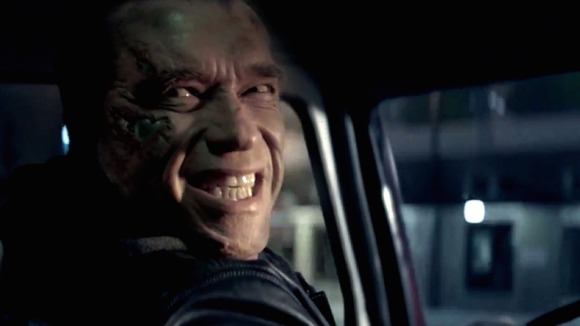 That’s a huge blessing from the papal of the franchise. Genisys is the sequel pure fans of the franchise has been waiting for and the movie that can usher in new fans. Terminator gets a big #WeLike from The SFPL!

Terminator Genisys is in theaters now!