Amber Rose let the world know that she doesn’t hate Khloe Kardashian at all during an interview with Entertainment Tonight.

The social spat began when Khloe Kardashian chimed off via her Twitter account about remarks made by Amber Rose about her younger sister Kylie Jenner.  During an interview with Power 105.1’s The Breakfast Club, Amber gave her opinion on 17-year-old Kylie , dating an older man 25-year-old Tyga.

During the sit down she told The Breakfast Club: ” That’s ridiculous. He should be ashamed of himself. For sure. He has a beautiful woman and a baby and left that for a 16-year-old who just turned 17.”

Khloe didn’t take to kindly to the comments and snapped back at Amber saying: “‘I was a stripper since I was 15 years old,’ Amber Rose told Foxx. Please don’t worry about my sister who has a career & her sh** together at ONLY 17,”

Amber followed that with memorable #DontPanic hashtag which immediately started trending and pretty much ended that spat.

Rose explains to Entertainment Tonight the reasoning behind comments towards Kylie: “I could have totally minded my own business when it came to her sister,” Rose explained. “But, me being a dancer at such a young age, dealing with older men gave me the humility and knowledge to speak on such a subject. [But] I can understand why it came across the wrong way to her. I get it. But, that’s a phone call she could have had with me.”

We thought the feud ended there but things got interesting again when her ex Kanye West made some disparaging remarks about her during an interview with The Breakfast Club.

Must Read: WATCH: Kanye West Talks To Power 105.1’s The Breakfast Club And Tells Us Everything That We Wanted To Know, Plus Drops The Bomb on Tyga & Kylie’s “Relationship” [Fly Visual]

Kanye pretty much shamed Amber when he told them : “It’s very hard for a woman to want to be with someone that’s with Amber Rose… I had to take 30 showers before I got with Kim.”

Must Read: Have A Seat: 5 Reasons Why Amber Rose’s #SlutWalk Is A Dumb Idea…

Amber admits those remarks are what motivated to her to do her own Slut Walk which she even extended an invite to the Kardashian’s to attend. 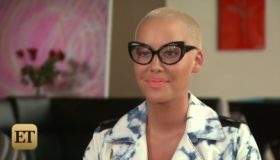