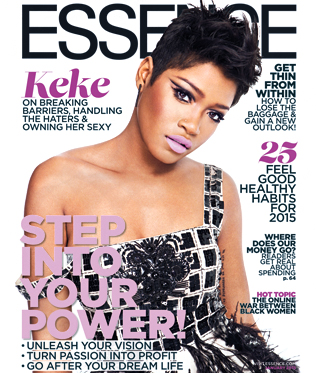 As of late, the 21 year old star has exhibited the turn of a new leaf: womanhood. We know KeKe as our beloved 11 year old speller from “Akeelah and the Bee” but, my my is she transforming into a beautiful young lady, breaking barriers in this here entertainment industry. First, she played Chili in CrazySexyCool: the TLC Story in which she did an exceptional job. Then, she lands a more historical role as Cinderella on Broadway, displaying versatility. Not only was she the first Black Cinderella but she was the youngest. Touching starring in Cinderella, KeKe said, “I know that the role of Cinderella is primarily for a Caucasian girl, but it didn’t stop me from going in and it didn’t stop them from seeing me.” A natural standout? That’s super fly.  Keke went on to launch her own talk show, which was very empowering to young females and viewers worldwide.

Now, she’s just sitting pretty, unbothered, on the cover of Essence. Keke talks with Essence about not only the accomplishments she’s achieved lately, but some rough patches she’s overcome through it all. Aside from the nudes that had been leaked of her online recently, Keke also went through a really rough break up. We say his loss. But KeKe says proudly, “that was the beginning of me standing up for myself. I would love to have somebody but this is such a great time in my life — In my career. I really am liking myself.”
Well, don’t you think she’s pretty fly?
Peep more pictures …