Sunday MTV celebrated the 20-year anniversary of the European Music Awards at SSE Hydro in Glasgow, Scotland. Fly gal Nicki Minaj did double duty as this years host as well as a performer. Nicki Minaj definitely caught the ears of folks when she performed a new record “Bed of Lies” Ft. Skylar Grey. Nicki bares it all on the emotional track, people immediately started wondering if the darts in the form of lyrics were being thrown at reported ex-boyfriend Safaree Samuels. TMZ reported that over the summer Nicki Minaj smashed a 2012 Mercedes-Benz which she owned instead of Safaree’s head. She also tossed all of his clothes in the garbage in typical ‘Waiting To Exhale’ fashion. Only thing missing was the fire.

Which brings us to Sunday, Nicki hit the EMA stage to perform a medley of her hits including the new record. She kicked things off with “Super Bass” followed by “Bed of Lies” where she was assisted by Skylar Grey herself. Nicki lets everything out on the track, check out some of the lyrics below…

Everything you got was based off of my contacts

You a fraud, but I’mma remain icon-stat

Balenciaga’s on my boots with the python strap

I was killin’ it, man you got me poppin’ pills in it

I told Baby hit you, I said this dude buggin’

Cause I was doing it for us, I told em fuck the public

Couldn’t believe that I was home alone contemplating

They say that your darkest hour comes before your dawn

But there was something I should’ve asked all along

I’mma ask on the song

We are sure Safaree will break his silence one of these days, as for the “Bed Of Lies” it is safe to assume it will live on Nicki’s forthcoming album ‘The Pinkprint”. Nicki looked great though, and did a great job hosting no denying that.

What do you think about Nicki’s new record? Leave your thoughts below. 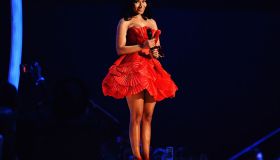