Michael Strahan has been describe as having ‘The Killer Crossover’ in the August issue of Ebony Magazine. From being the official host of the morning hit show ‘LIVE with Kelly & Michael’ and to now taking his hosting talents to the next studio of ‘Good Morning America’; it’s safe to say that Strahan is the most hardest working man in daytime television right now. 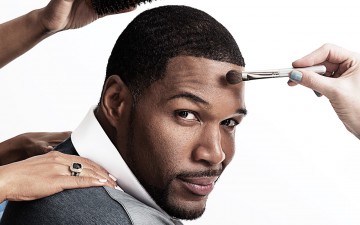 ‘LIVE with Kelly & Michael’ is in its strongest season in seven years in total viewers and is currently the No. 2-ranked daytime talk show, trailing only Dr. Phil. Strahan has been on the show for a total of two years to date. Live is also America’s No.1 entertainment talk show, period. Let’s just Michael improved those ratings drastically. Of course, his co-host Kelly Ripa and their visual chemistry adds to the success of the show.

Talk about one hell of a crossover with a serious comeback! Congrats to Michael!

To read the entire cover story on Michael Strahan, grab the August issue of EBONY magazine on newsstands now!

JUST IN! This morning on the ‘LIVE with Kelly & Michael’ show, Michael received quite a few surprising compliments from actress Diane Keaton, as she reveals her “kissing bucket list; in which Michael made the cut! Guess who gets a KISS right after?! Check it out below…